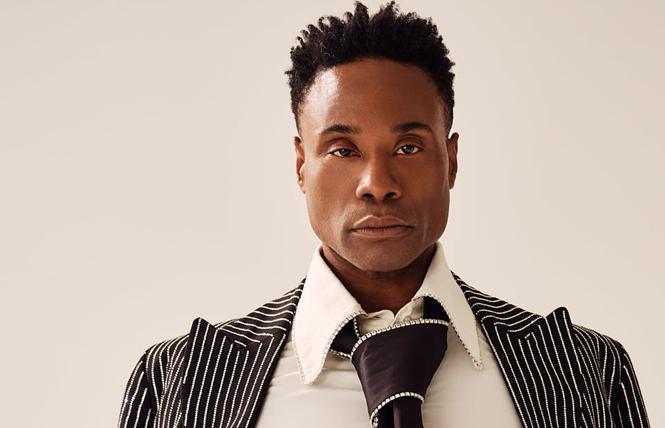 This month's 40th anniversary of the first reports of AIDS has aligned with another health pandemic, COVID-19. On Thursday, June 24, from 3:30 to 5:30 p.m. Pacific Time, gay actor Billy Porter of the hit show "Pose," who recently revealed his own HIV diagnosis, will join Michael Sneed, Johnson & Johnson's executive vice president of global cultural affairs (which in addition to helping the world fight COVID, is currently working on a HIV vaccine), for a free special screening of award-winning documentary "5B." The 2018 film chronicles the stories of the nurses who risked their lives to found the world's first AIDS ward at San Francisco General Hospital.

Immediately following the virtual screening, Porter will participate in a fireside chat with 5B nurse Alison Moe?d Paolercio, RN MS, and nurse, entrepreneur, innovator, and author Rebecca Love, RN, to discuss the disproportionate toll that epidemics and pandemics take on at-risk communities, the parallels between the HIV/AIDS and COVID-19 crises, and the role of nurses in driving health care change.

Tenderloin Pride Festival Sat.
A Pride festival will be held in San Francisco's Tenderloin neighborhood Saturday, June 19, from noon to 6 p.m. on Larkin Street between O'Farrell and Eddy streets.

According to organizers, the event will include music, drag shows, performances, art, and food and merchant booths and will celebrate the rich legacy of the Tenderloin as an LGBTQ neighborhood.

The afternoon's special guest host will be Tita Aida. The festival will benefit organizations providing services and mutual aid to LGBTQIA+ and unhoused folks in San Francisco. The event is free and all are welcome. It is a production of the Tenderloin Merchants Association in partnership with San Francisco Community Health Center.

A flier described the events as the "first" in the Tenderloin during Pride Month, but there have been others at different times of the year. In 2019, the Bay Area Reporter noted that Aja Monet-Ashton helped organize a September Tenderloin Pride event that included a benefit reception and street fair.

Qmunity District Pride event
Update: Organizers announced 6/17 that the event has been canceled.
The Qmunity District will hold the first major in-person Pride event in the South Bay since the COVID-19 pandemic began when it hosts a San Jose Earthquakes watch party Saturday, June 19. The Quakes take on Austin FC at 6 p.m. in Texas.

Organizers stated in an email that the afternoon begins at 3 p.m. with tailgate-inspired activities followed by the livestreamed Earthquakes Pride game. Then San Jose's Post Street, the anchor of the LGBTQ district, will be transformed into an exciting area of entertainment, community, and Pride, featuring special drag performances, a DJ, photo booth, and plenty of giveaways, COVID vaccination opportunities, and more.

The event, which is open to the public, is sponsored by the Project MORE Foundation, which provides services and support to the Northern California LGBTQ+ and ally communities.

Call for Muni Art entries
San Francisco Beautiful and the San Francisco Municipal Transportation Agency have issued a call for artists for the 2022 Muni Art project.

The theme is "Streets of San Francisco" for the seventh year of the project. Five poems by the late San Francisco poet Lawrence Ferlinghetti have been chosen for the artists to visually interpret as a tribute. Each artist has eight panels to showcase their work, which will be installed in 100 Muni buses throughout the city.

Applications are available here. The deadline is Friday, July 16.

The conversation will look at the militant history of Pride, such as the 1969 Stonewall riots in New York City, and the history of police targeting queer spaces and criminalizing LGBTQIA people, especially trans women of color.

Breana Hansen, a queer educator at City College of San Francisco, will be the featured speaker. They have been active in the SF League Against Systemic Harm in calling for the defunding of the San Francisco Police Department and fighting to save LGBTQ studies at City College from being cut.

The San Francisco LGBT Pride Celebration Committee announced last year that the SF Pride Alliance of SFPD would be banned from participating in the Pride parade in uniform. However, there is no Pride parade this year. SF Pride officials' September 2020 statement did not mention other law enforcement agencies or whether police officers could march in street clothes.

In New York, the organizers of the Pride events have banned police and other law enforcement officers from the annual parade until at least 2025, according to NBC News.

To register for the FSP Zoom event, click here.