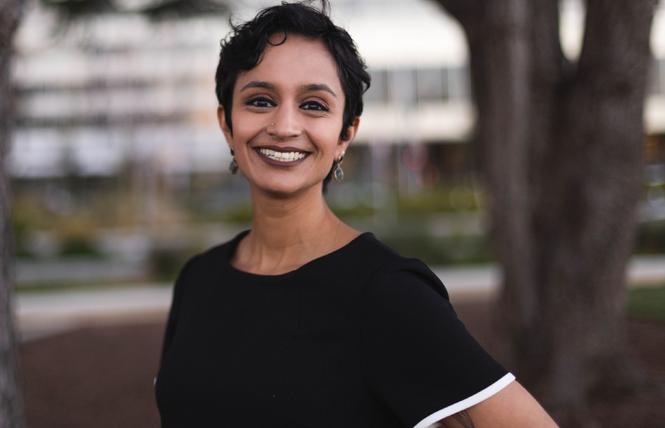 Residents in Alameda, San Leandro, and part of Oakland have started early voting in the June 29 special primary election for the 18th Assembly District seat. The seat became open after Governor Gavin Newsom tapped former Assemblyman Rob Bonta (D) to be the state's new attorney general, after former AG Xavier Becerra was confirmed by the U.S. Senate to be President Joe Biden's health and human services secretary. There are three out candidates running in the special primary election, and we endorse one of them — queer lesbian attorney Janani Ramachandran.

In her endorsement questionnaire, Ramachandran, a progressive Democrat, exhibited a firm grasp of the issues facing the Assembly district — namely housing, health care, and criminal justice. While Ramachandran is young — she turns 29 in a couple of weeks — her experience representing low-income domestic violence survivors has allowed her to question the lack of outreach to potential LGBTQ clients and advocate for more queer attorneys and policy leaders in this field. As an attorney at the Family Violence Appellate Project, she wrote letters opposing the federal Housing and Urban Development Department's Trump-era proposal to eliminate shelter options for the transgender community (new HUD Secretary Marcia Fudge recently rescinded that policy, which had not been implemented), and advocated for greater family leave protections that expanded the definition of what a family could consist of, which significantly benefitted LGBTQ families. "Throughout my life, I have been committed to furthering the goals of the LGBTQ community in all that I do," she wrote. "I fully intend to continue to pursue this through my work as a state legislator."

In terms of legislative ideas, Ramachandran stated she would support bills "on many intersectional issues that impact members of the LGBTQ+ community including non-discrimination in the workplace and education, transgender and intersex rights, single payer health care and HIV/AIDS programs, criminal justice reform, and immigration reform. I would also support bills prioritized by the Legislative LGBTQ Caucus." And that's key, because if elected, Ramachandran would be the first person to join the group of out lawmakers representing the Q in LGBTQ.

She would also continue her work for domestic violence policy. "I believe that violence against LGBTQ individuals must be recognized as a public health crisis in California, and given far greater attention and resources on a statewide basis," she stated. She noted that LGBTQ people face greater incidents of abuse than their heterosexual counterparts: 61% of bisexual women, 44% of lesbian women, 37% of bisexual men, and 26% of gay men experience rape, physical violence, or stalking by an intimate partner. A 2015 national survey found that 54% of transgender individuals reported that they experienced some form of intimate partner violence, and 47% reported that they'd been sexually assaulted. "This violence, in turn, leads to immense consequences to physical health and longevity, higher rates of mental health struggles and suicide, economic instability, and homelessness, particularly among youth and transgender victims.

Housing
The housing crisis is one of the state's biggest challenges, and the 18th Assembly District is not immune. Oakland's unhoused population increased during the pandemic, and the city has struggled to find solutions. Ramachandran stated that 160,000 Californians are unhoused on any given night and over 2 million residents can't afford to pay rent. Tens of thousands are facing eviction in a pending "eviction tsunami" following the COVID pandemic as various eviction moratoriums end. She proposes an immediate, "true moratorium" on evictions and foreclosures during not just the pandemic, but post-pandemic recovery period. She also wants to implement a "right to free counsel" for all tenants facing eviction, because, as she pointed out, it is far more likely a tenant will remain in their home if they have legal representation. She also supports repealing Costa-Hawkins and the Ellis Act, although efforts to reform those two state laws have been unsuccessful so far, both in the legislature and at the ballot box. (Costa-Hawkins deals with the ability of cities to set rent control, while the Ellis Act lets landlords take rental units off the market if they evict a tenant so that a family member moves in.)

SOGI
Regarding LGBTQ issues such as sexual orientation and gender identity data collection, which the state has been slow to gather even during the COVID pandemic, Ramachandran stated that she supports bills for increased funding for SOGI data collection, for COVID tracking, and other state purposes. She also wants to build support for and implement a true wealth tax in the Golden State that would tax mega-millionaires and billionaires. The money raised, she stated, could fund and improve programs such as SOGI data collection.

Criminal justice reform
Criminal justice reform is another important issue in the race, especially with officer-involved shootings in Oakland, Alameda, and San Leandro. Ramachandran wrote that she believes in the need to end qualified immunity for police officers. "I will fight for every violent police officer to be held accountable," she wrote. "I will also push for stronger reforms in restructuring our existing parole hearing system so that it is more equitable and fair," she stated.

Qualified candidate
Ramachandran, who was among the first candidates to enter the race, also has a compelling personal story. "Being fully authentic to my own identities in all realms of my life has certainly come with challenges — given that I come from a very religious South Indian family where being openly LGBTQ is taboo," she wrote. "Nonetheless, I have remained committed to overcoming these many barriers and am excited to run as an openly LGBTQ candidate." If elected, Ramachandran would be California's first LGBTQ API female-identified state legislator. She would also be California's first South Asian female-identified state legislator.