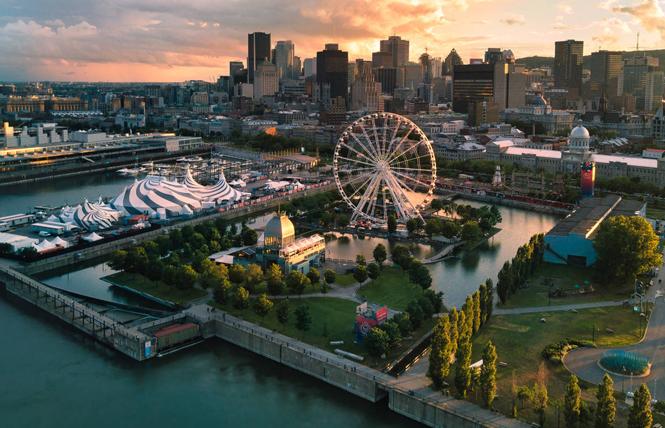 The International AIDS Society has selected Montreal as the host city for the AIDS 2022 conference. Photo: Courtesy Bon Jour Quebec

The International AIDS Society has announced that its AIDS 2022 conference will take place in-person in Montreal, Canada and virtually next summer.

The 24th International AIDS Conference next year will be held July 29-August 2, with pre-conference meetings set to begin July 27.

"We know that there is still a long way to go in the fight against HIV and AIDS," the Honorable Patty Hajdu, Canada's minister of health, stated in a news release. "In 2022, Canada will proudly host AIDS 2022 so that we can further our commitments to ending the HIV and AIDS global epidemic."

Last year's AIDS 2020 was a virtual affair due to the COVID pandemic. San Francisco and Oakland co-hosted the event, but no in-person meetings were held there.

IAS President and conference co-chair Adeeba Kamarulzaman stated that the 2022 event would be a "pivotal moment to once more galvanize the scientific, policy, and activist communities."

"In the face of COVID-19, the global HIV community banded together to apply lessons learned from decades of pandemic response," she stated.

According to the release, advances in COVID-19, particularly the rapid development of viable vaccines, have reinvigorated discussions around HIV prevention and treatment.

"Following COVID-19 vaccine discovery, we are closer than ever before to an effective HIV vaccine and even on a path toward a cure," Jean-Pierre Routy, the local co-chair in Canada, stated. "Breakthroughs in testing and treatment have improved the global response. Communities most affected by HIV continue to push for greater inclusion and accountability."

IAS stated that to ensure equitable access for people from low- and middle-income countries, it will support in-person attendance and virtual participation through an ambitious scholarship program. This will include the provision of internet data and devices to help bridge the digital divide for people in resource-limited settings, the agency noted.

Canada previously hosted the 1989 AIDS conference in Montreal, which the IAS stated was remembered as the "moment when advocacy took center stage." According to ACT UP/New York's website, 300 activists from that group and their Canadian counterparts brushed past security and took their place in the heart of the conference. They remained in their seats, chanting and holding signs. At future conferences, researchers made room for people living with AIDS and their advocates, the website explained. (https://actupny.org/documents/montreal.html)
The 1996 AIDS conference was held in Vancouver, which first reported the efficacy of triple combination therapy, and the 2006 conference was held in Toronto.

Tourisme Montreal, the city's tourism bureau, will serve as the official conference partner.
Registration will open in November. For more information, go to https://www.aids2022.org/

LYRIC open house is underway
LYRIC is celebrating its 33rd anniversary with a virtual open house that continues Thursday, June 3, and Friday, June 4, with events from 6 to 7 p.m.

Friday's session will include a lavender drag show extravaganza with the Rice Rockettes. Starting off with a pre-program youth-only space, the Rice Rockettes will provide makeup tips and talk about the art of drag. Then the youth-friendly drag show will take place, hosted by Buka Kay, aka LYRIC board member Jack Choi.

The open house is free, though donations are welcome. For more information, visit LYRIC's open house page at https://lyric.org/open-house/

The Haight Ashbury Free Clinic was funded during the Summer of Love through proceeds from benefit concerts, many of which were organized by Bill Graham and Dr. David Smith, founder of the clinic. The first concert took place on July 13, 1967 at the Fillmore Auditorium in San Francisco. Another, titled "Dr. Sunday's Medicine Show," took place on October 8, 1967 in San Jose. These helped support the clinic's creed that "healthcare is a right, not a privilege."

Tickets start at $54 and can be purchased here.

There is also an online auction viewable at the aforementioned website.

Special CBD board meeting on cameras
The Castro/Upper Market Community Benefit District board will hold a virtual special meeting about its proposal to place a network of 125 cameras in the LGBTQ neighborhood Monday, June 7, from 6 to 7:30 p.m.

As the Bay Area Reporter noted in an article last week, there has not been movement on the plan following a tense town hall meeting in late April. A number of community groups are opposed to the surveillance cameras, including the Harvey Milk and Alice B. Toklas LGBTQ Democratic clubs and the Castro LGBTQ Cultural District. Supporters, on the other hand, say the cameras will help address a rash of burglaries and street crime in the area.

Andrea Aiello, a lesbian who is executive director of the CBD, wrote in an email that the meeting agenda includes two items: a report back to the district from its third party vendor on the results of the online survey it conducted and the April 27 town hall, and then a vote to either continue meeting with the community and researching to ultimately make a decision or a vote to no longer move forward with the camera program.

In the East Bay, Richmond Rainbow Pride will hold its digital Pride 2021 free event Sunday, June 6, from noon to 3 p.m. Under the theme of "Together We Rise," there will be a panel discussion on LGBTQ issues and other activities. It will be hosted by Michelle Meow and people can RSVP on the RRP's Facebook page.

In the North Bay, Napa Valley LGBTQ Pride Month has in-person and virtual events planned. There will be the second annual Pride cruise Saturday, June 5, and virtual LGBTQ Q&A panel for parents and teens Friday, June 11, a rainbow play date for families and young children Saturday, June 12, the annual Dining Out at the Q Thursday, June 17, and the American Canyon Pride Pop Up Sunday, June 27.

Organizers said that people will be able to gather safely in-person this year, though there will be capacity limits and social distancing.

For a complete list of activities, go to www.napavalleypride.org or the Napa Valley LGBTQ Pride Facebook page.

According to a news release, the accreditation signifies St. Francis hospital's commitment to excellence in surgical care for transgender, gender-diverse, and gender-nonconforming patients throughout the Bay Area and beyond. Founding surgeons of excellence include Drs. Dev Gurjal, Scott Mosser, Thomas Satterwhite, and Heidi Wittenberg, the release stated.

"I'm so proud of this recognition, but more importantly, the great expertise, teamwork, and compassionate care that allows us to receive this special accreditation," stated Daryn Kumar, president and CEO of St. Francis Memorial Hospital.

For more information about the gender institute at St. Francis, click here.