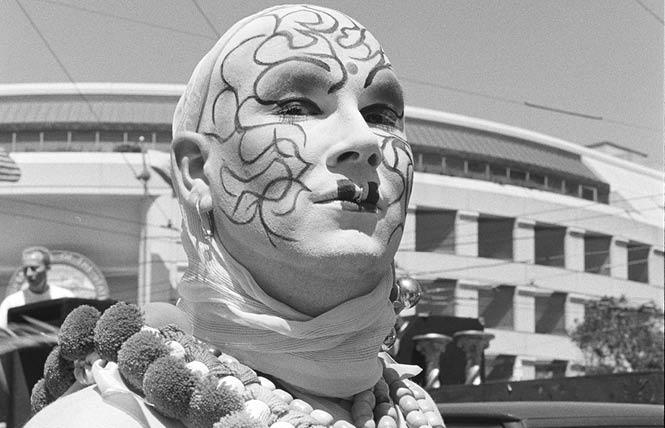 Leigh Pankonin, best known as Phatima Rude, aka Sister Phatima la Dyke Van Dick/Sister Hateful Sow of the Sisters of Perpetual Indulgence Inc., died May 18 while sleeping in their Portland, Oregon apartment. They were 55.

Phatima also performed as reTarded Panda and Taffi 3.14, according to the Sister Kitty Catalyst, the former mistress of archives who wrote an obituary.

Born in 1966, they grew up in Fergus Falls, Minnesota, a small city in the mid-western part of the state. Their mom, Cleo Rude, worked at a state mental hospital, so they grew up at the institution and studied the people there later using them as the basis for drag characters. Phatima treasured Cleo Rude, saying she had a wicked sense of humor and swore like a sailor. By the late 1980s the two moved to San Francisco and Phatima was introduced to the art of drag in 1989, by drag mother MichaelAngelo. Phatima said, "Once you do drag it's in your blood ... It became my medium, and my dialect, for what I wanted to convey, or make others think about, or entice, or repulse."

Phatima was heavily influenced by the London-based drag performance artist Leigh Bowery and the Club Kid scenes. They were initially attracted by drag's ability to escape "Kevin," their childhood name, and it helped them transform despite extreme shyness, Sister Kitty wrote. Phatima was gender-fluid and nonbinary before those terms gained wide use. They would decide against gender transition and instead live authentically as something in-between, which felt more honest to them; at the same time expressing their whole life was their art, eventually self-describing as "Pronoun," the obituary stated. In the gay male and drag worlds she/her pronouns were common and like many things about Phatima's life, society slowly became more like the world they were already living, and they/them pronouns are now standard.

Throughout Phatima's careers they were known to be an incredibly nice and joyous person, Sister Kitty wrote. They supported themselves as a makeup and hair artist, which was also used in their drag work. In 1992, Phatima joined the Sisters of Perpetual Indulgence Inc., the charitable drag nun group that started in San Francisco, becoming Fully Professed in 1994. Her mother in the Order is Sister Lily White Superior Posterior; they are also survived by their only daughter in the Order, Sister Phyllis Stein the Fragrant and her descendants. Like all the Sisters, Phatima was a Holy Fool, challenging preconceptions and accepted norms. Sister Lily noted Phatima first found the art of makeup to be inspiring but performance art was their true muse. Now, Sister Phatima is considered a Nun of The Above, an homage to Sister Boom Boom's supervisor campaign. As the Bay Area Reporter reported in the 2012 obituary for Jack Fertig, aka Sister Boom Boom, she made her mark on history when she threw her wimple into the ring in the 1982 San Francisco supervisor election. Listing her occupation as "Nun of the Above," and with a war chest of less than $1,000, Boom Boom garnered more than 23,000 votes, but fell short of winning one of the five open seats. 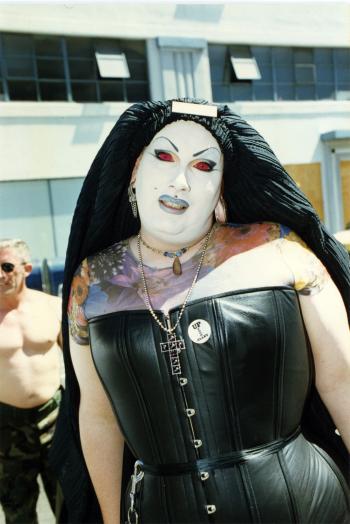 Performance art
Sister Kitty wrote that Phatima's legacy is now mostly entwined around their live performance art; as a go-go dancer, model, stage prop, and often unforgettable, even unsettling, and otherworldly performer. Phatima quickly gained a reputation in the drag, alternative, queer punk communities of the city for being a body-positive art freak who lived every moment as their chosen being, an outsider's outsider. They didn't de-drag and become a different version of themselves as many do; and never treated the makeup and drag as armor to be removed. They were a 24/7 art goddess, simultaneously accessible while being larger-than-life, Sister Kitty explained. Phatima also had artistic commitment to the dark abyss, and embodying art itself. They didn't explain when people were confused or uncomfortable as they were too busy living their genuine life. Phatima also created traditional art paintings, and multimedia works, sometimes incorporating their bodily fluids, the obituary stated.

Phatima embraced the drag medium and continually blew away preconceived notions of what it could become. Phatima incorporated transformative body horror (staples, hot glue, hooks, colostomy bags of mystery fluids, and bedazzled drills through her flesh) years before any gross-out television was popular, Sister Kitty wrote. They played with the ideas that the flesh was just another boundary to be manipulated; even staging mock funerals for themself. Phatima was inspiring, audacious, kind, and out-of-the-box creative, which enthralled fellow artists and audiences.

Phatima would live with and care for her mother until her death in 2004. Then, eventually they lived in a van that they would use for work giving free and reduced rides for the queer Homobiles cab service. It was another aspect of their love and service to their community; supporting both behind and in front of the scenes, the obituary stated.

A short documentary, "Ladies and Gentlemen, Phatima Rude" (2014), follows their journeys with performing, illness, poverty, addiction, and gender identity. They remained full of wicked humor and wisdom throughout their careers. In Phatima's own words, "Choose Death: the death of the ego, the death of want, the death of greed, the death of envy, the death of jealousy, the death of ignorance, the death of suffering. Life lasts 75 years on average, Death is eternal. ;)"

In addition to many friends and Sisters, Phatima is survived by her beloved dog, Mary Kate, who is now living with a neighbor, Sister Kitty said. 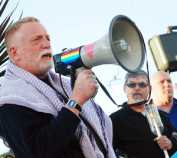 Phatima Rude memorial to be held Aug. 1 at Public Works
Sign up!