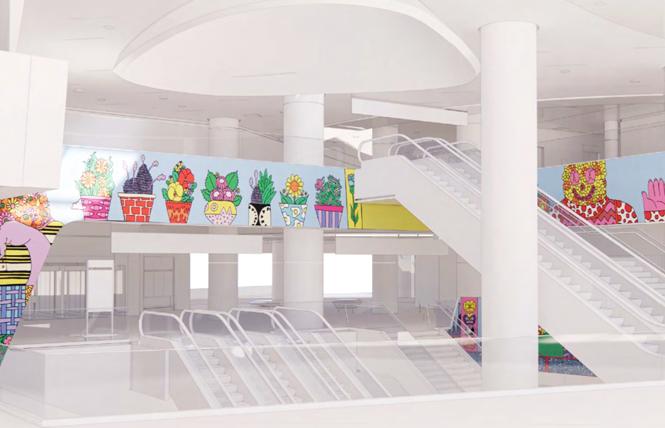 A splash of psychedelic imagery infused with a 1960s vibe straight out of the Haight Ashbury is set to enliven a yet-to-be-built atrium space in Harvey Milk Terminal 1 at San Francisco International Airport. Inspired by the city's first gay supervisor, who represented the famous neighborhood at City Hall in 1978, the artwork features playful canines, colorful pots of plants, and flowery figures in a panoply of bright colors.

San Francisco-based artist Craig Calderwood earlier this year won the $200,000 commission to design and fabricate the artwork for the three-story atrium. Located in the terminal's pre-security arrivals level, the space will surround escalators that take passengers to the baggage claim area and ground transportation.

It is the first large public art project for Calderwood, 34, who is transgender and queer. They grew up in Bakersfield in California's Central Valley and, after attending Fresno City College, moved to San Francisco a decade ago.

"An opportunity to create work that has a kind of queerness to it, that is highly visible, feels exciting to me. Also, it is just such an interesting space," Calderwood told the Bay Area Reporter during a recent interview conducted via Zoom. 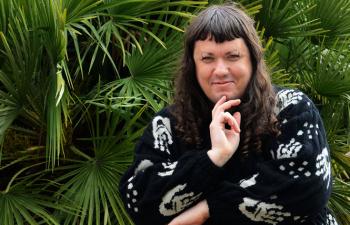 They had to imagine the dimensions of the atrium and how people would move through the space since that area of the Milk terminal has yet to be constructed. Slated as part of the final phase of the $2.4 billion remodel of the Milk terminal, the project's construction timeline has been delayed due to the COVID pandemic.

"Originally slated for completion in 2023, we're now expecting completion in 2024, although a revised installation schedule may have yet to be established," airport spokesman Doug Yakel told the B.A.R.

It means that installation of artist Andrea Bowers' $1.1 million commission for the Milk terminal's outdoor underpass lighting art project will also be delayed. As the B.A.R. reported last May, Bowers will turn the sidewalk entrance of the terminal into a dance floor with a series of disco balls and an elaborate neon artwork lighting up inspirational quotes from Milk, the first LGBT icon to have an airport terminal named in their honor.

Her work is inspired by the facade of the Castro Theatre, situated in the LGBTQ Castro district that Milk also represented due to his winning a seat on the San Francisco Board of Supervisors in November 1977. Tragically, he was assassinated 11 months into his first term the morning of November 27, 1978 along with then-mayor George Moscone.

In 2018, city officials agreed to name Terminal 1 at SFO after Milk. The decision came five years after gay former Supervisor David Campos had initially floated a proposal to name the entire airport after the gay icon and then settled on one of the airport's four terminals.

Amid the protracted bureaucratic wrangling over the airport naming details, focus at one point turned to the public artwork planned for the terminal. District 9 Supervisor Hillary Ronen, a legislative aide to Campos who succeeded him in office, had pressed to see that at least some of the art was inspired by Milk.

She recently told the B.A.R. she is "elated" with the artwork and several photographic exhibits that will greet passengers of the Milk terminal.

"It took a lot of screaming, cajoling, and hearings to get here and we got here," said Ronen. "I like that it is an eclectic collection and it fully spans a lot of the terminal. One of the biggest fights started with the corner nook and now we have the exhibit in the long customs corridor, the artwork for the atrium, and the lights outside the terminal."

In addition to the two artists' works, there is a photographic exhibit created by the SFO Museum that traces Milk's life from his childhood in New York to his days as a pioneering political operative in San Francisco during the 1970s. It is in an area dubbed the Central Inglenook near the American Airlines check-in counters.

Repurposed exhibit
Another massive photographic exhibit detailing Milk's life and political career that had been inside the terminal is being repurposed and reinstalled in the Milk terminal's customs corridor, which is a passenger walkway connecting Harvey Milk Terminal 1 to the International Terminal Boarding Area A. As the B.A.R. reported last month, it should debut this September and remain on display for an indefinite period of time.

A portion of the exhibit, titled "Harvey Milk: Messenger of Hope," will adorn for the next two years a wall inside the Milk terminal just beyond the security gates where new retail spaces are being built. It opens to the public Tuesday, May 25, several days after Harvey Milk Day is observed this Saturday, May 22, which would have been Milk's 91st birthday.

As occurred with Bowers' commission, a selection panel that included Milk's gay nephew Stuart Milk, who heads the foundation he and his family created to promote the legacy of his famous uncle, recommended Calderwood be picked to create the atrium space art. They have yet to even step foot into the Milk terminal, partly due to the health crisis resulting in orders people sequester at home and also because Calderwood hasn't had a reason to fly.

They are known for their graphic, line-heavy style that is oftentimes cartoonish. Calderwood draws inspiration from comics and video games. For the Milk-inspired artwork, they were inspired not only by Milk's progressive political views but also his coming of age during the 1960s.

"I think it fits well with some of Harvey's interests. A lot of hippie, free love movements were happening in the '60s," said Calderwood. "Some of the color palettes and figures feel very '60s. I use a lot of floral motifs and pattern motifs in my work."

The dog play area scene harkens to Milk's sponsoring a local law to encourage dog owners to pick up their pooches' poop. He famously planted a pile of dog excrement for him to step on following a news conference Milk held about the law.

"They are all made up dogs," said Calderwood, who in their youth had dogs. "Dogs feel very San Francisco to me. A lot of people are trying to make a dog happen in their life in the city."

It also allowed Calderwood to have some fun with gender-based tropes by, for instance, choosing to depict a Rottweiler with pink fur and hearts on it.

"I want to look at these opportunities of how even animals get masculinized and feminized with all these things we put on them," said Calderwood. "It was a fun scene to draw."

Their vernacular for the artwork showcases pansies, lavender, and stripe motifs as they all relate to the LGBTQ community, either as a term or color used to refer to queer people or a pattern that images the imprisonment of being in a closet or discriminated against for who you are as an LGBTQ person.

"I feel like I grew up in a fairly insulated space and in a very conservative and Christian environment. I didn't really get access to any kind of queer political information or gay political information," recalled Calderwood. "I moved here kind of on a whim with a friend to not be in the Valley and to try and pursue art. I am self taught; I found myself hitting a lot of roadblocks in Fresno in the arts scene there."

Their atrium artwork also plays on travel, as Calderwood designed it so people first see land-based imagery and as they ascend the escalator they encounter scenes of blue sky.

"To me, it helps create a travelling narrative from the bottom to the top of the piece," said Calderwood.

As for Milk himself, he is not depicted in any of the scenes. But his spirit imbues it, as Calderwood based some of the imagery on photos they saw of Milk.

"When I make my art and I am pulling a lot of different information to make the piece, I like to put little nods in there. I saw a photo of him holding a bouquet of daisies, so I put a daisy bush in one of the planters," said Calderwood. "I did things like that. I didn't want it to be literal necessarily; my art is never really literal."

Their artwork is likely to bring a smile to airport passengers, and perhaps a bit of hope as Milk so famously called on people to provide.

"I was looking at Harvey Milk's legacy and his wanting life for others to be nice and easy. Not just queer people, but labor unions and all kinds of marginalized people who deserved to have a nice life and an easy life," said Calderwood. "I wanted to create a piece that thought about that more than necessarily a representation of him."