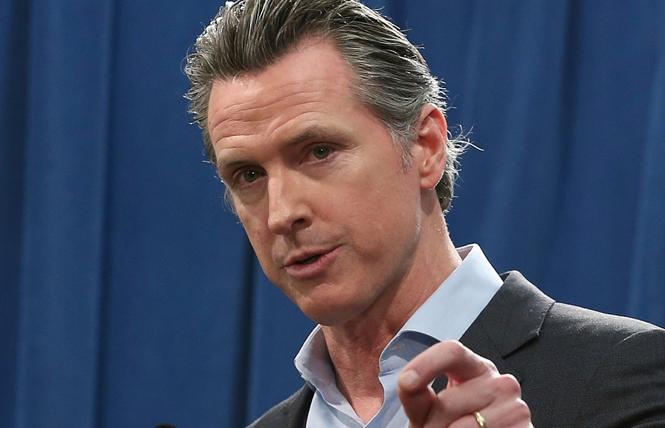 The recent news that California has a $76 billion budget surplus was a pleasant surprise, especially after the COVID pandemic enforced belt-tightening last year. Governor Gavin Newsom, who is facing a recall later this year, has been traveling around the state touting various plans for spending the windfall. Lawmakers, who must reach agreement with Newsom on any spending plan, are salivating. Nonetheless, the governor has unveiled sweeping proposals like handing out $600 stimulus checks to two-thirds of the state's residents, providing rental relief, and eliminating debt owed for traffic fees and fines by low-income Californians. All are worthy expenditures that will help those who need it most.

But as long as Newsom is garnering headlines for his proposals, we'd like to offer some important ones that in comparison would cost a sliver of the surplus. We urge the governor to budget for these items.

Trans health fund
Newsom, already a trailblazer on LGBTQ issues, can further bolster his standing among the community by allocating $15 million to the transgender health fund that he approved last year. That's right, as we reported at the time, Newsom signed Assembly Bill 2218 into law and that established the Transgender Wellness and Equity Fund. The problem was that the bill was stripped of funding in its final version in order for the governor to sign it. That was disappointing, but not surprising given the economic devastation from COVID at the time. In fact, many bills that didn't deal with the pandemic were postponed altogether, making AB 2218's passage noteworthy. Advocates, including Assemblyman Miguel Santiago (D-Los Angeles), a straight ally who authored the legislation, fought hard to get the bill passed. He was joined by the TransLatina@ Coalition and other groups, who held news conferences and lobbied lawmakers through last year's session.

The law is intended to assist organizations serving people that identify as transgender, gender-nonconforming, or intersex, and help create or fund TGI-specific housing programs and partnerships with hospitals, health care clinics and other medical providers to provide TGI-focused health care. Earlier this year, before the state surplus was announced, the TransLatin@ Coalition joined with over 25 organizations to create the California Transgender, Gender Non-conforming, Intersex Policy Alliance. That group held a virtual news conference April 21 to announce its intention to seek funding for the Transgender Wellness and Equity Fund. The alliance asked for $15 million over two years, starting in 2022, Bamby Salcedo, a trans woman who is president and CEO of the TransLatin@ Coalition, told the B.A.R. But with the news of the budget surplus, we think the state can fund the entire $15 million now, allowing the program to kick off with the money it needs. The wraparound services called for in the legislation would help trans and gender-nonconforming people as they recover from the pandemic. That means housing and health care — two areas of critical importance to this community.

As Santiago said during the recent news conference, now is the time for California to take a stand for trans equity.

"We had horrifying attacks from outside groups that said heinous things," Santiago said about the struggle to get AB 2218 passed. "But the Legislature made it very clear that we need to provide the wraparound support services and we needed to start a Trans Wellness and Equity Fund, and we are here today, having passed a policy piece, going to the budget request."

The good news is that we've heard that the $15 million request is included in the state Senate's budget items for the surplus; now it needs to get into the governor's budget.

Improving access to health care for trans and gender-nonconforming people will save money in the long run. It will reduce emergency room visits, which are a drain on public coffers, and allow patients to get the medications and care that they need from clinics and medical providers.

LGBTQ archives
Another item that would benefit the LGBTQ community is a request for $750,000 for the preservation and accessibility of queer archives across the state. In a February letter to Legislative LGBTQ Caucus Chair Assemblyman Evan Low (D-Campbell), the leaders of the GLBT Historical Society and the James C. Hormel LGBTQIA Center in San Francisco; the ONE Archives at USC Libraries and OUTWORDS in Los Angeles; the Lambda Archives in San Diego; the June L. Mazer Lesbian Archives in West Hollywood; the Archives and Special Collections at UCSF; and the Center for LGBTQ and Gender Studies in Religion at the Pacific School of Religion in Berkeley, requested this small amount of state funding. The groups received $500,000 in state funds last fiscal year (allocated to the California State Library). In their letter, the officials pointed out that as these institutions begin to emerge from the pandemic, much work remains in digitizing collections and for new acquisitions. This is a miniscule amount of money in the state's budget, and Newsom should fund it.

HIV/AIDS, hepatitis, STIs
So far there is no new funding in the state's budget to fund HIV, viral hepatitis, sexually transmitted infections, or overdose programs. The End the Epidemics coalition is urging lawmakers and Newsom to include funding for these critical services. It's ridiculous that in a state like California, there isn't a robust plan that is funded to address health issues that still affect millions of residents.

As the B.A.R. has been reporting, STI rates are expected to rise post-COVID. The potential confluence between untreated STIs, antibiotic resistant STIs, and the expected resurgence of socializing this year and beyond worries experts such as Dr. Stephanie Cohen, a straight ally who is the medical director of the Department of Public Health's City Clinic in the South of Market neighborhood.

The state should seek to address this sooner, rather than later.

Bright spot
There is one bit of good news in Newsom's "California Roars Back" $100 billion comeback plan — Equality California announced the governor's revised budget includes $3 million for the state Department of Education to develop LGBTQ+ teacher training. As a spate of unprecedented attacks on trans students are occurring in states across the country, this funding is sorely needed. Like the aforementioned trans health fund, a bill was passed and signed by Newsom, but was stripped of funding.

Overall, Newsom must make LGBTQ issues a part of his budget and the surplus. Trans health, history preservation, HIV/AIDS, and teacher training are crucial and benefit more than just LGBTQ people. If the governor really wants the state to roar back after the pandemic, it's initiatives like these programs that will benefit communities up and down the Golden State.