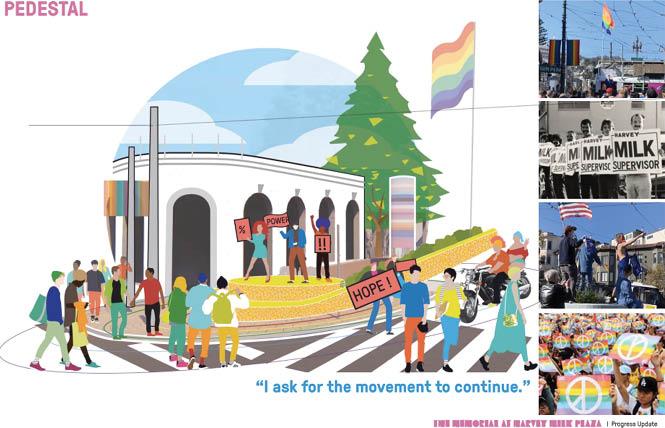 A rendering of the pedestal concept for Harvey Milk Plaza was shown to attendees at Thursday's virtual town hall. Photo: Screengrab via SWA Group

As the Friends of Harvey Milk Plaza works to reboot its renovation project, new preliminary designs for the public parklet above the Castro Muni Station were rolled out Thursday during a virtual town hall that saw a memorial grove concept received most favorably by attendees.

A pedestal-type design scored lower, though specific numbers weren't available from the Friends group for the informal voting that took place during the meeting.

Milk was the first openly gay man to be elected in San Francisco when he won a supervisors' seat in 1977 and represented the Castro at City Hall. Several years after he was killed 11 months into his first term, city officials named the aboveground entrance area into the LGBTQ neighborhood's transit station after the pioneering politician.

There were two sets of non-exclusive general approaches to the design of the space, as explained by Daniel Cunningham, a landscape architect with SWA Group, an international landscape, architecture, planning, and urban design firm that is working on the project. Cunningham said the inspiration behind the design concepts presented were "based on years of community feedback."

Those attending the April 15 town hall were able to vote via Zoom's poll function on the four concepts. Brian Springfield, a gay man who is the interim executive director of the Friends of Harvey Milk Plaza, said that these results will be combined with results from a second town hall this Saturday to inform SWA Group.

Though Springfield has not provided the B.A.R. with vote totals, or the number of attendees, as of press time, the memorial grove concept received the highest number of "Love It" votes (at 47%), followed by the beacon concept (41%), the pedestal concept (26%), and the activation concept (21%).

The pedestal concept received the highest number of "Dislike It" votes (21%), followed by the activation concept (18%), the beacon concept (9%), and the memorial grove concept (6%).

Engage the city received the highest number of "Dislike It" votes (15%), followed by catalyst for change (12%). Stitch the divide and welcome to the Castro received no dislike votes.

The town hall will be repeated Saturday, April 17, at 11 a.m. People interested in attending can sign up here. Community members can also provide feedback at this event.

Political Notes: HRC set to move out of historic Castro storefront amid talks to make property a national park site
Sign up!