Out in the World: Japanese court issues landmark same-sex ruling 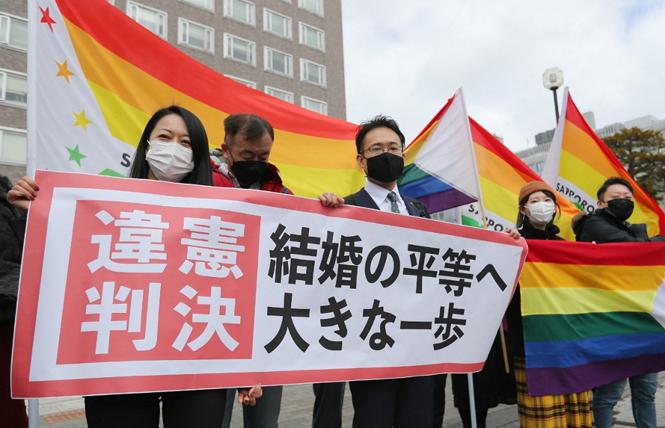 The landmark decision brought praise and hope to Japan's queer couples dreaming of wedding bells that could be realized in the future.

"I could not stop crying," Ryosuke Kunimi, one of the plaintiffs, told the BBC after the decision.

Ai Nakajima, another plaintiff, told the network that the decision was "one huge step forward for Japan."

"We are moving closer to making our dream come true," Ai Nakajima said.

"Japan remains governed by an incredibly conservative set of politicians. The Sapporo District Court's decision surprised me for sure," the queer Japanese American wrote to the Bay Area Reporter. "I am not quite at the point of being hopeful, but we can't afford to be anything but hopeful if we want to see change."

This is Japan's first ruling on same-sex marriage and the first of five similar cases filed in other jurisdictions by 13 couples at the same time on Valentine's Day 2019.

Japan is the only G7 country that has not legalized same-sex marriage.

Experts believe the ruling could significantly influence the other cases.

Judge Takebe Tomoko said there should be no difference in legal benefits based on sexual orientation.

The judge agreed with the plaintiffs, stating that not allowing same-sex marriage is discriminatory under Article 14 of Japan's constitution guaranteeing equal rights to everyone, therefore lacks reasonable grounds, reported NKH.

The ruling was groundbreaking for three reasons, according to Makiko Terahara, director of Marriage for All Japan, writing in a Washington Post op-ed. First, it identified sexual orientation as a personal characteristic that is immutable like gender and race. Second, it stated the purpose of marriage is to protect the couple's common life together, not procreation. Finally, the traditional family cannot be a reason for not recognizing same-sex marriage.

Wolfson, an attorney, founded the now-defunct Freedom to Marry, an organization that fought for marriage equality in the United States.

The U.S. won same-sex marriage in 2015, with the U.S. Supreme Court's Obergefell v. Hodges decision. Wolfson has since taken his LGBTQ and marriage equality advocacy around the world.

"There's already majority support for marriage equality among the Japanese people, reflecting their values of respect, harmony, and inclusion," Wolfson wrote in an email to the B.A.R. "The constitution's command of equality, dignity, and choice in marriage is clear. The Bar Association, businesses, and now a court have spoken. Every day of delay is harmful. Now the government and Diet must act. It's time for the freedom to marry in Japan."

More than 78% of respondents said they approved or were likely to approve of same-sex marriage, according to a survey conducted by Japanese advertising company Dentsu Inc. in 2018.

Makiko Terahara noted that one of the Tokyo plaintiffs, Ikuo Sato, died unexpectedly due to a brain hemorrhage January 18, he wrote in the op-ed. Ikuo Sato requested to hold his partner's hand when he died, but his last wish was denied, he wrote.

The members of the Diet should not wait for Japan's supreme court to decide, Makiko Terahara wrote, but to respect the constitution as stipulated under Article 99.

MFAJ has launched several successful campaigns and plans to continue campaigning businesses and organizations, lobbying, and producing events and fundraisers.

Judge Takebe Tomoko did not grant the 1 million yen ($9,168.42) in reparations the same-sex couples requested in the case. The reparations were for Japan to acknowledge the pain they suffered because they were not able to marry.

However, the plaintiffs can appeal and plan to, according to Makiko Terahara. The activists are going after Article 24 of the constitution, which deals directly with marriage, not equality.

Article 24 states that "marriage shall be based only on mutual consent of both sexes." Only later in the same clause does it refer to "husband and wife."

Since then, more than 70 municipalities have allowed same-sex couples to register their relationships. More than 1,500 couples have registered, reported NHK.

Japan's LGBTQ movement
Japan was the first country in Asia to decriminalize homosexuality in 1881. However, it remained socially taboo in the conservative country.

That is changing as Japan's LGBTQ movement has visibly grown since the 1990s when Tokyo hosted its first Pride event in 1994 that included about 1,000 marchers. Today, 27 years later, the Tokyo Rainbow Pride attracts more than 150,000 people annually, according to its website.

Tokyo's Pride event inspired Sapporo Rainbow Pride, which launched in 1996, and Kansai Rainbow Festa in Osaka, which began in 2006.

Acceptance of LGBTQ people among Japanese is growing and legal battles are being won as the movement shifts hearts and minds.

More queer Japanese are coming out, yet many remain in the closet, according to the Dentsu survey.

The 2018 online survey discovered acceptance of LGBTQ people has grown in Japan, especially among young people, compared to a 2015 survey.

Nearly 68.5% of the participants knew what the LGBT acronym meant. Almost 80% of the respondents wanted to learn more about LGBTQ people and 72.1% said they wanted stronger legal protections for the LGBTQ community.

More than 65% of the LGBTQ respondents had not revealed their sexuality to anyone.

International and Japanese corporations are backing Japan's LGBTQ community, providing some benefits and protections and presenting a business case to the government on why it should protect its LGBTQ citizens, which is that it's important for the country's bottom line.

Queer Japanese activists are also calling on Japan to pass an LGBTQ Equality Act. The bill would protect LGBTQ people from discrimination based on their sexual orientation and gender identity. The activists are pushing for the bill prior to the Summer Olympics in Tokyo.

The summer 2020 Olympics was delayed a year due to the global pandemic caused by coronavirus, which causes COVID-19. The games are scheduled for August.

The court ruled March 12 that the provision stopping pending applications was unconstitutional, violating the prohibition of retroactive legislation, Transgender Europe stated in a March 20 news release.

Six of the 14 justices made dissenting opinions before the ruling passed, reported Reuters.

Hungarian transgender activists were encouraged by the court's ruling.

"The Constitutional Court concluded that to retroactively prohibit transgender persons from legal gender recognition is contrary to Hungary's Fundamental Law (or constitution)," according to Transvanilla Transgender Association's March 19 news release. "The organization cited that 'when acting within the scope of its powers to protect institutions the state may not enact such procedural frameworks that unconstitutionally limit any of the rights guaranteed by the Fundamental Law.'"

"The recent ruling of the Hungarian Constitutional Court is a reason for hope among trans and nonbinary people in Hungary. Now it is time to put the judgment into action," stated Davis. "We call upon the Hungarian government to swiftly process all pending applications for legal gender recognition."

For two years, Hungarian authorities caused delays for transgender Hungarians attempting to legally change their identification to match their gender leading up to the May 19 passage of the bill. Then the process was halted. All applications were rejected last May when lawmakers passed a bill denying gender changes on identification documents.

It was one of two challenges Hungary's transgender community faced in 2020 beyond the global pandemic.

The other anti-transgender bill the community saw passed by Hungary's parliament denied transgender children the right to ever change their gender once the birth certificate was issued.

Davis expressed concern that the court did not "consider the general constitutionality of Hungary's ban on legal gender recognition."

He urged the court to "reconsider this question as soon as possible."

Multiple legal challenges have been launched.

Tamas Dombos, spokesman of the Hatter Society, Hungary's leading transgender organization, speculated about the challenges against the bill and new legal procedures still banned, according to Reuters. He believes there is a chance the entire bill could be overturned later this year.

Hatter Society and Transvanilla, which are members of TGEU, criticized the court for not ruling on the general constitutionality of the Legal Gender Recognition ban as a whole.

The transgender organizations threatened to take legal action all the way up to the European Court of Human Rights if necessary, according to the release.

All eyes are on the courts as Hungary's Prime Minister Viktor Orban has taken a cue from Poland's President Andrzei Duda for his 2022 reelection campaign. The Polish ally is starting to ratchet up the hateful rhetoric against LGBTQ people for his campaign.

Orban could also ignore the court's judgments, as he has in the past.

Looking back at lesbian visibility UN conference
OutRight Action International is hosting a free virtual screening and discussion of "Lesbians Free Everyone."

The documentary by South African filmmaker and lesbian activist Beverley "Bev" Palesa Ditsie, revisits some of the key players in the biggest lesbian visibility campaign in history at the United Nations Fourth World Conference on Women in Beijing 25 years ago, in 1995.

The discussion and documentary screening are Thursday, March 25, at 9 a.m. Pacific Time. To register, click here.


Got international LGBTQ news tips? Call or send them to Heather Cassell at WhatsApp: 415-517-7239, Skype: heather.cassell, or oitwnews@gmail.com