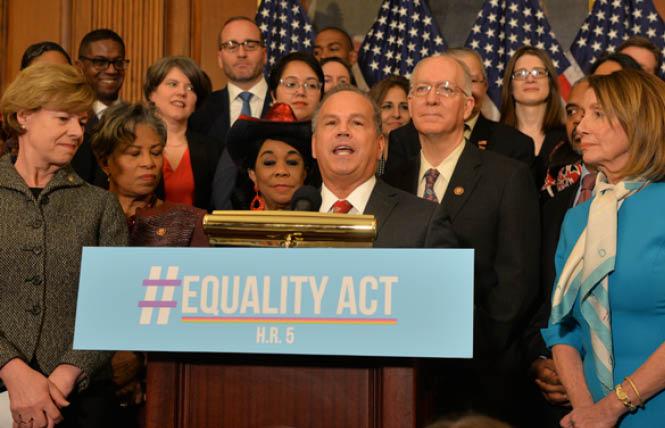 With a House vote on the Equality Act set for next week, talks between LGBTQ rights advocates and Capitol Hill have begun on getting the legislation across the finish line with Democratic control of both chambers of Congress and the White House, although that has become more complicated with opponents raising fears about transgender kids in sports and Senator Mitt Romney's (R-Utah) newly declared opposition to the bill.

LGBTQ rights supporters, who agreed to speak on condition of anonymity for greater candor, said they were engaged in talks with lawmakers — including in the Senate, where the major fight will be — in the same week House Majority Leader Steny Hoyer (D-Maryland) announced a floor vote would take place on the Equality Act.

Merkley, the sponsor of the bill in the Senate, said in a statement to the Washington Blade he's serious about seizing the moment to get the job done with the Equality Act.

"For years, Mitch McConnell's legislative graveyard blocked the Equality Act from getting so much as a hearing," Merkley said, referring to the former Senate majority leader. "But the American people raised their voices loud and clear in the 2020 elections, and gave Congress and President Biden a strong mandate to make this country a more equal and free place for everyone — including LGBTQ Americans. With new Senate leadership, decisive public support and strong momentum in the U.S. House, I'll be doing everything I can to ensure that this year will finally be the year that this landmark bill becomes the law of the land."

Opponents, however, will likely raise as an objection to the Equality Act the participation of transgender kids in sports, which critics say distorts the issue. Senator Rand Paul (R-Kentucky), in remarks during a committee hearing, said the idea was "bizarre" and Nikki Haley, a Republican and former U.S. ambassador to the United Nations, wrote an op-ed for the National Review against it.

The Equality Act's supporters have affirmed the issue has come up in discussion. No changes are expected in advance of the House vote next week, but the Senate is an open question. One LGBTQ advocate said no decision had been made one way or another to address the issue of transgender kids in sports, although another said the expectation is no changes will be made.

Gillian Branstetter, a transgender advocate and spokesperson for the National Women's Law Center, rejected the idea the bill's supporters would concede on the issue of transgender kids in sports, saying an ultimate agreement to such language would be a "surprise."

"The broad-based coalition organizations that support the Equality Act will proudly and loudly tell you that trans women are women," Branstetter said. "And if you apply an asterisk to that, if you buy into the idea that a trans woman athlete, if she wins, is apparently cheating, that you are applying an asterisk to the idea that she is a woman and therefore on equal footing with all other women."

Sports not explicitly addressed
The Equality Act doesn't explicitly address sports, but would prohibit anti-LGBTQ discrimination in education and federal programs and suggests schools would have to allow transgender girls to compete in events consistent with their gender identity. Major sports associations, including the Olympics and the NCAA, have established internal rules based on sex characteristics, such as hormone levels, to govern allowing transgender athletes to compete in those leagues consistent with their gender identity.

Despite any objections in the House, approval of the Equality Act should be straightforward under Democratic control, and even more so given leadership's decision to move the bill directly to the floor without the regular order of holding hearings or a committee vote. Two hearings took place in the House in 2019, when the Democrats approved Equality Act legislation in a party-line vote and were joined by eight Republicans.

Hoyer, in a statement to the Blade, said he made the decision to forego regular order in the current Congress because the legislation demands immediate attention.

"I was proud to bring the Equality Act to the House floor last Congress, and pleased to see this critical legislation pass with strong support," Hoyer said. "It is imperative that we move this priority swiftly to advance the cause of equality and ensure our laws recognize the equal rights and dignity of LGBTQ people in our country."

One thing that will be different from the last Congress is having a supportive administration in the White House. White House Press Secretary Jen Psaki told the Blade earlier this month President Joe Biden "stands by" his campaign pledge to sign the legislation within 100 days.

One LGBTQ advocate said he would expect the White House to issue a formal Statement of Administration Policy, an official written communication outlining the executive branch's position on a particular legislative action, in anticipation of the House vote detailing Biden's support for the Equality Act. The White House didn't immediately respond to a request to confirm its plans for input.

The Senate
In the Senate, the new Democratic control presents an opportunity for the first time to advance the legislation in that chamber. While regular order on the Equality Act may be absent in the House, that likely won't be the case in the Senate. The bill's supporters are expecting a hearing in the Senate Judiciary Committee, although the timing isn't yet certain.

But the Senate is a real fight. With the chamber in a 50-50 split, the Equality Act's supporters will need to find 10 Republicans to reach the 60 votes needed to end a filibuster on the legislation. Alternatively, Democrats could opt to junk the legislative filibuster, but that idea may a non-starter with bisexual Senator Kyrsten Sinema (D-Arizona) and Senator Joe Manchin (D-West Virginia) saying they'd vote to reject such a proposal.

Romney has already come out against the Equality Act, citing a lack of sufficient religious liberty provisions in the legislation.

"Senator Romney believes that strong religious liberty protections are essential to any legislation on this issue, and since those provisions are absent from this particular bill, he is not able to support it," said Arielle Mueller, a Romney spokesperson, via email to the Blade.

But strategy behind advancing the Equality Act in the Senate by claiming 60 votes to overcome a filibuster appears to be a genuine effort, not just a plan to force a vote on the legislation to make Republican opponents look bad without any real expectation the legislation will pass.

One way to address religious liberty concerns is the imminent ruling from the U.S. Supreme Court in the case of Fulton v. City of Philadelphia, which will determine whether a Catholic foster care agency has a First Amendment right to ban same-sex couples. Although the conservative court may deliver a ruling against LGBTQ rights, observers have said the decision may let the air out of the religious liberty issue and allow additional Republicans to come aboard.

Still, getting to 10 Republicans is a challenge. The two Republicans who appear to be the lowest hanging fruit are Senators Susan Collins (R-Maine), who was the only Republican co-sponsor in the previous Congress, and Lisa Murkowski (R-Alaska), who voted for the LGBTQ Employment Non-Discrimination Act in 2013 and signaled she cast a ballot as a regular voter in 2018 against an anti-transgender bathroom initiative in Anchorage.

Collins, who's reportedly peeved after the Human Rights Campaign snubbed her in the 2020 election in favor of her Democratic challenger, didn't respond to multiple requests by the Blade to comment on the Equality Act. A spokesperson for Murkowski couldn't immediately be reached.

The next tier is Senator Rob Portman (R-Ohio), who has a gay son, and Senator Pat Toomey (R-Pennsylvania). Both Portman and Toomey voted for the Employment Non-Discrimination Act in 2013. After that, the bill's supporters may look to Joni Ernst (R-Iowa), who has signaled an openness to allowing transgender people in the military, and Thom Tillis (R-North Carolina), who has voted to affirm spousal benefits to same-sex couples. (Portman and Toomey are retiring next year.)

But with Romney signaling via a spokesperson late Tuesday he won't support the Equality Act, the remaining math is tricky. Options could be Republican Florida Senators Rick Scott and Marco Rubio, although their presidential ambitions may mean their votes are off the table, or Senator John Cornyn (R-Texas) with demographic changes making his state more "blue." Senator Richard Burr (R-North Carolina) voted for "Don't Ask, Don't Tell" repeal in 2010, but against the Employment Non-Discrimination Act in 2013. (Burr is also retiring in 2022.)

Neither Sinema nor Manchin's office responded to the Blade's request to comment on the Equality Act and whether they'd reconsider their opposition to scrapping the filibuster to enact the legislation. (Manchin's support for the Equality Act itself is in question. In the previous Congress, Manchin declined to support the legislation, citing insufficient guidance on "students transitioning between genders in public schools.")

One Republican lobbyist said talk is underway about a Republican compromise along the lines of the Fairness for All Act introduced last year by Representative Chris Stewart (R-Utah).

"I think there's well over 10 Republicans in the Senate who want to get to 'yes,'" the Republican lobbyist said. "And I think that right now we have this dynamic which is that there are more pro-LGBTQ Republicans in Congress, than probably at any time, but we have to meet them, not even in the middle, we just have to come over a few notches from the left, and meet them and take their concerns seriously."

If the Equality Act were amended "to reflect those concerns to protect fundamental religious freedoms," the Republican lobbyist said, such as granting greater leeway to religious institutions in the Equality Act, supporters could "pass that through with 60 or more votes."

Meanwhile, efforts to pass LGBTQ non-discrimination are getting a boost from the LGBTQ group Freedom for All Americans promoting its Conservatives Against Discrimination campaign, which has been propelled by a recent $1 million grant from the Gill Foundation. The initiative isn't geared toward any specific piece of legislation, but seeks to raise general awareness of the issue.