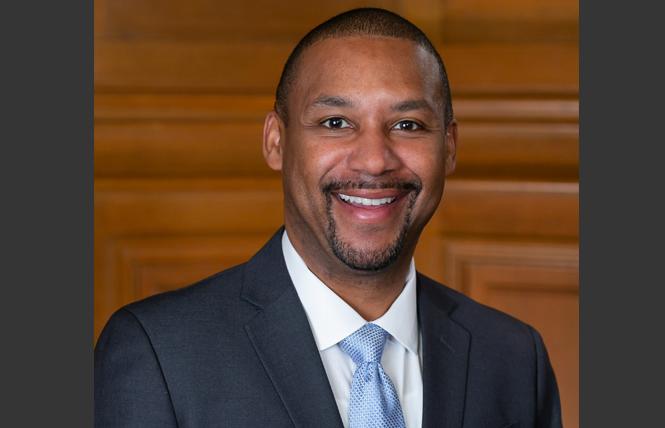 Following a year of racial protests over police killings of Black Americans, both in the Bay Area and across the country, San Francisco's top two political leaders will be African Americans born and raised in the city.

Friday the Board of Supervisors unanimously elected District 10 Supervisor Shamann Walton as its next president, the first Black man to serve in the role. He succeeds former District 7 Supervisor Norman Yee, who was termed off the board after eights years in office and served as president of the 11-member body the last two years.

"I look forward to serving this body as president with the compassion and values we together guard very fiercely," said Walton, pledging to his 10 colleagues he would work with them "on issues that matter most to your district and to our precious city."

Leading up to today's inaugural meeting of the newly seated board there was speculation that District 3 Supervisor Aaron Peskin could once again serve as board president. But Walton was the lone supervisor to be nominated to be board president.

"During these difficult times I know Supervisor Walton's quality and experience will help us bring our diverse and wonderful city together leveraging our strengths in helping us to legislate fairly. I nominate him wholeheartedly," said newly seated District 7 Supervisor Myrna Melgar.

Her nomination came shortly after Melgar, representing the neighborhoods west of Twin Peaks, and District 1 Supervisor Connie Chan, representing the Richmond district, took their oath of office along with the incumbent winners of the odd-numbered supervisor districts in the November election.

Melgar, the mother of a lesbian daughter, is a former city planning commissioner who has made addressing land use and building code reforms a key concern of hers as a supervisor. Chan, a former City Hall aide for Peskin, was also a spokeswoman for the city's parks department.

Noting it is the 20th year since he first served on the board, Peskin said he has come to consider Walton "a little bit like a sibling," adding, "I have really been honored to deepen our relationship, which I think is one of mutual respect."

But he also issued a warning to not just Walton but all of his colleagues that because of the issues the city is facing now is not the time for the board, dominated by progressives, to be in an adversarial role with each other or with Mayor London Breed, a moderate.

"Political divisions and camps, I think these are frankly what I would call mini hatchets and I think we need to bury them. I think we can do that together," said Peskin. "It doesn't mean we won't have our policy differences. The same goes with the relationship between this board and the mayor."

Gay District 8 Supervisor Rafael Mandelman, the board's lone LGBTQ member, acknowledged the historic nature of Walton's becoming board president and pledged to support him over the coming years.

"We are going to elect the first Black man to be president of the Board of Supervisors. That is a huge deal," said Mandelman.

Prior to going to public comment followed by the board's vote to confirm him as board president, Walton said he "100% graciously and humbly accept the nomination."

Walton, 45, will now lead the board over the next two years as it works with Breed, a former board president herself who is the city's first Black female leader, to address crippling budget deficits brought on by the COVID-19 pandemic. The city is facing an estimated $411.1 million budget deficit in the 2021-2022 fiscal year that begins July 1 and a $242.1 million deficit in the fiscal year after that.

New and reelected supervisors take the oath of office January 8.

The health crisis has also exacerbated intractable issues that have confounded City Hall for decades, from homelessness and a lack of affordable housing to crime and drug overdoses. The city has seen rental housing costs plummet over the last 10 months as residents move to other locales, but home prices remain astronomically high.

While COVID vaccines are being rolled out, San Francisco remains on lock down as cases of the virus now surpass 25,500 in the city and 218 people have died. City leaders have ordered all nonessential employees to stay home for the indefinite future and many businesses and cultural institutions to remain closed. Residents are being asked not to travel outside of the region, and if they do, to quarantine at home for 10 days when they return.

The multiple challenges mean Walton will be facing a tenure as board president unlike anything his predecessors have faced in recent memory. The former school board member and president was elected to represent the city's historically Black neighborhoods of the Bayview and Hunters Point in 2018.

Breed joined the supervisors' virtual meeting following Walton's election to congratulate the new board president. She also urged the board members to "stop pointing the finger" and instead work collaboratively to address the myriad issues facing the city.

"This is a time of serious work. I understand we will have our disagreements; that is to be expected. But if there is any time to put aside our differences in the name of accomplishing something great, this is that time," said Breed. "We can do so much to move our city forward and help the people of San Francisco if only we can put aside our differences and make a commitment to work together."

Like Breed, Walton lived in the city's public housing as a child until moving to Vallejo, where he served in juvenile hall several times and was expelled from school. He went on to graduate from Morris Brown College and then earn a master's degree in public administration from San Francisco State University.

Prior to his election to the board, Walton was executive director at Young Community Developers focused on providing jobs and affordable housing to District 10 residents. He has two adult children and lives in the Bayview with his wife, Mesha, and his two stepsons.