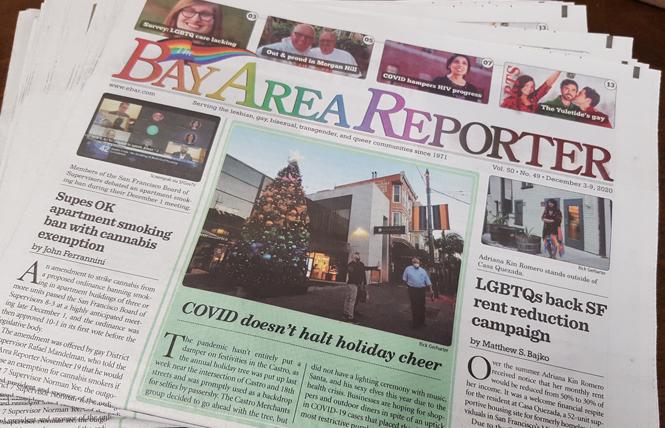 The Bay Area Reporter is one of 15 local news outlets participating in a fundraising campaign to save local journalism. Photo: Cynthia Laird

After withstanding unprecedented drops in revenue due to the COVID-19 pandemic, 15 San Francisco public interest news outlets have launched a joint fundraiser to preserve and protect the city's independent press.

The Bay Area Reporter, the city's leading LGBTQ publication, is one of the participating outlets.

For-profit and nonprofit, large and small newsrooms launched Save SF news last week. The campaign builds on the success of Chicago Independent Media Alliance's May campaign that generated $160,000 for more than 40 newsrooms, according to a news release.

In a joint statement, the outlets pointed out that local reporting has been essential during the shelter-in-place public health orders and local and national elections, highlighting the issues that matter and institutions that needed help. For its part, the B.A.R. has focused on struggles faced by LGBTQ tenants, elders, and business districts such as the Castro.

The financial struggles of local news outlets didn't start with the health crisis. Over the past decade, many San Francisco publications and online sites have closed, reduced output, and changed ownership or consolidated. The tech boom has not led to a renaissance for the city's local media, which has been the case since Craigslist decimated classified advertising more than a decade ago.

But the pandemic, with its accompanying economic losses, has seen a drastic drop in advertising revenue for publications.

Members of the public can give at https://www.savesfnews.com/ through January 5. Donors can give to one, some, or all of the publications.

If people prefer, they can mail a check payable to Accion Latina, 2958 24th Street, San Francisco, CA 94110. Please include the following information with your check: Save SF News, your name, mailing and email addresses, and phone. More information is available at the aforementioned website.

As the B.A.R. has reported, the plan to have 125 surveillance cameras around the LGBTQ neighborhood has generated controversy. The cameras would be funded by tech mogul Craig Larsen, who is paying CBDs in other parts of the city to install the devices.

While CBD officials maintain the cameras would help with public safety in the district, others are alarmed at the idea, and noted that a lawsuit has already been filed relating to alleged improper sharing of camera footage of a Black Lives Matter protest elsewhere in the city. In late October, a CBD committee hit the pause button on the Castro project, which has not yet been voted on by the CBD board.

In a news release announcing the survey, CBD Executive Director Andrea Aiello noted the camera program, if approved, would be community-driven, hold bad actors and law enforcement equally accountable, and empower local stakeholders to take ownership of their own public safety needs.

Under the proposal, there would be no audio or voice recording and no facial recognition. There would be no live monitoring of the video. Cameras would focus on the public realm only and footage would be released only for a crime reported to the San Francisco Police Department or upon submittal and approval of a request form. Storage would be for no more than 30 days.

The survey, which takes about 12 minutes to complete and is anonymous, is available here.