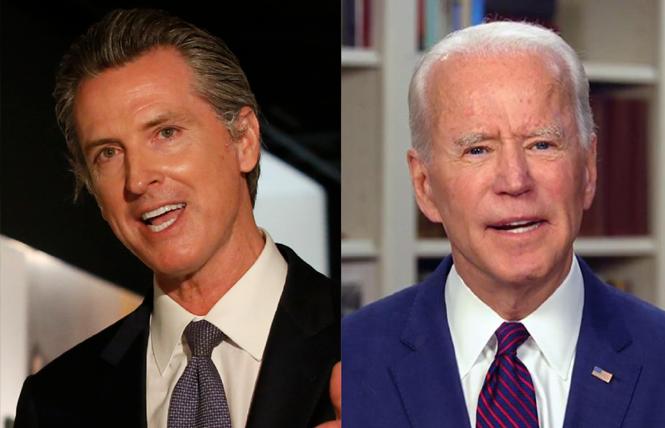 Governor Gavin Newsom has joked about it, but it should not be surprising that Democrats of all stripes are vying to promote potential nominees as he decides on a successor to California Senator Kamala Harris, the vice president-elect who will leave Congress when she and President-elect Joe Biden are sworn in January 20. Under state law, the decision is solely Newsom's to make and will be one of the most consequential of his first term. He said during a Monday news conference that he did not spend last weekend thinking about Harris' replacement; he was consumed with the rising cases of COVID-19 in the Golden State. However, he said that he does have criteria. The pick needs to be "inclusive," he said, and, "I want to be considerate of people's points of view."

Let us add our two cents: Newsom should appoint an LGBTQ person, preferably, a queer person of color, probably from Southern California, since the state's other Democratic senator, Dianne Feinstein, hails from the Bay Area. It should be someone younger, as the next generation of political leaders is the key for future progress on myriad issues.

Those candidate characteristics mirror findings in a recent USC Schwarzenegger Institute California Issues Poll of 1,155 registered voters that was conducted between October 27-31. In it, 76% of voters want a senator with "a fresh and new voice in politics;" a senator with legislative experience (75%); and a senator who will "chart their own course and distinguish themselves" from Feinstein (77%). A plurality, 48%, prefers someone who is not part of Washington, D.C. or Sacramento.

Picking a historic first-time candidate doesn't seem to matter to most voters surveyed (52%) but it's important to us. California has never had a Latino senator, nor have we had an out person in the upper chamber of Congress. The survey noted that 31% want Newsom to pick the state's first Latino senator, while 24% want the governor to name an LGBTQ person to the seat.

Among the many names floated, one LGBTQ person stands out: Robert Garcia, the mayor of Long Beach. His name was mentioned in the USC survey as a possible candidate, though not in a head-to-head matchup with others — and received a majority of support (57%). Straight allies who received positive numbers include Los Angeles Congresswoman Karen Bass (53%), Secretary of State Alex Padilla (53%), and Oakland Congresswoman Barbara Lee (51%).

So, as Newsom grapples with this historic decision, we urge him to keep the state's queer community and communities of color in mind.

As for Biden, he too can make historic picks to his cabinet. We say that it's long past due for an LGBTQ cabinet official (sorry, Ric Grenell's brief stint as acting director of national intelligence in the Trump administration doesn't count — it was cabinet-level, not one of the secretaries in the president's cabinet). While there have been news articles ruminating on numerous possibilities among former Obama administration officials and others, again, we think the country would be better served with some fresh faces. Two who have demonstrated acumen and their potential to play greater roles in national government are Pete Buttigieg, the gay former mayor of South Bend, Indiana and a onetime presidential candidate; and lesbian Senator Tammy Baldwin, who hustled to get the vote out in her state, Wisconsin, which flipped back to the Democrats in the presidential race. Buttigieg, a veteran, has been mentioned as a potential head of the Department of Veterans Affairs or as U.S. ambassador to the United Nations. Baldwin, long a champion of access to health care, would be a solid pick to lead the now-troubled Department of Health and Human Services. There are other queer people who have also been suggested for a cabinet post, such as Randy Weingarten, a lesbian who is president of the American Federation of Teachers.

All of these public servants, and other qualified LGBTQs out there, would indeed bring unique perspectives and inclusivity to any administration. Serious challenges lay ahead for California and the nation, and we need to cultivate young, talented, and diverse candidates for government positions at the highest levels.