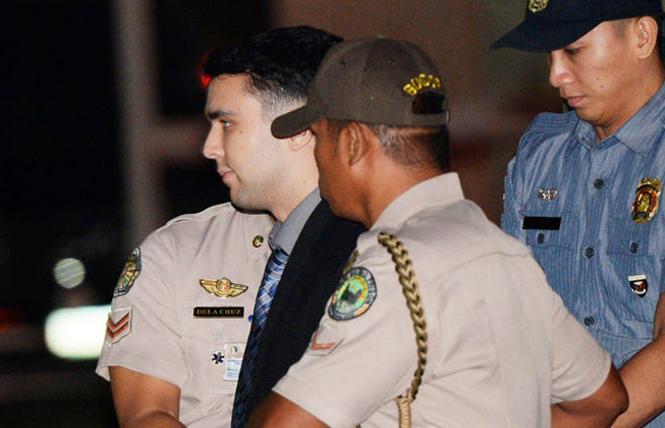 Recently pardoned former U.S. Marine Private First Class Joseph Scott Pemberton is shown being escorted to his detention cell in 2015 following his conviction for the murder of Jennifer Laude, a transgender woman in 2014. Photo: Ted Aljibe/AP

Philippine President Rodrigo Duterte's pardon of a former United States Marine convicted of the murder of a transgender Filipina was harshly criticized and denounced by family, human rights organizations, and critics of the U.S. military.

"There is so much disrespect in the manner by which Jennifer was killed — reflective of the disrespect U.S. has for the Philippines' democracy and sovereignty," Suarez wrote in a statement to the media.

Pemberton was convicted of murdering Laude and sentenced to six to 12 years in jail in 2015. He has served nearly six years. The New York Times reported that most recently he was held at Camp Aguinaldo, the Philippine military headquarters in metropolitan Manila.

Suarez referred not only to Laude's brutal murder, but also to the U.S. and Philippine's Visiting Forces Agreement signed in 1998.

Harry Roque, now a spokesman for Duterte but who was the Laude's family's lawyer through the trial, denounced his boss' actions.

"I deplore the short period of imprisonment meted on Pemberton, who killed a Filipino under the most gruesome manner," he said, reported the Gay Times.

Karapatan, a leading human rights organization in the Philippines, accused Duterte of "placing the interests of the U.S. government above the Filipino people's demands for justice and accountability by pardoning Pemberton."

"This is a hard slap on the LGBTQ+ community and a blatant affront to our national sovereignty," the organization said in a statement to the media.

"While human rights defenders, activists, government critics, and ordinary folks are being arrested and jailed for all sorts of fabricated and flimsy charges, while elderly and sickly prisoners continue to be denied humanitarian release amid a deadly pandemic, Duterte has granted absolute pardon to a transphobic murderer, who has not shown an iota of remorse for his brutal crime," the organization stated.

UP Babaylan, an LGBTQ organization in the Philippines, said Duterte's freeing Pemberton was "a direct attack not just on Jennifer and her family but to every trans person and every victim of corrupt and unequal justice system," reported the Times.

Pemberton has appealed his case since 2016. His appeals were finally granted by the Olongapo City Regional Trial Court, which directed the Bureau of Corrections to release him September 1.

The Times reported that the pardon came days after Duterte's office blocked the court order to free Pemberton, reported the Times.

Aware of the presidential pardon, Pemberton's lawyer, Rowena Garcia-Flores, told the Associated Press that he was "very happy."

Duterte defended his decision during a televised cabinet meeting, stating he was being fair.

"We should allow him the good character presumption, because there was never a complaint of him going berserk," Duterte said, reported CBS News.

The murder
Pemberton killed Laude at the Celzone Lodge, an Olongapo City hotel, in 2014.

That night, staff at the lodge found Laude slumped on the floor half-naked with her head leaning against the toilet bowl. It appeared she was strangled. Her body was covered with a dozen bruises, bite marks, and cuts.

Pemberton admitted to strangling, but not killing, Laude, claiming self-defense at a court hearing in 2015.

At the time, Pemberton faced up to 40 years in prison for murder. The court reduced his charges, cutting his potential sentence in half to 20 years. He ultimately was convicted and sentenced to serve six to 12 years in prison, which was later reduced to 10 years. His time served in detention was credited to his sentence along with a "good conduct time allowance," which added up to more than his sentence, reported the Times.

Pemberton was originally sent to New Bilibid Prison, a national penitentiary in suburban Muntinlupa City, but ended up at Camp Aguinaldo.

The killing happened six months after the U.S. and Philippines signed the Enhanced Defense Cooperation Agreement to operationalize the VFA. The VFA allows the U.S. military to operate in the Philippines and manage the conduct of service members serving in the country, according to the Mutual Defense Treaty established in 1951.

Duterte's pardon of Pemberton comes after a tense year for the U.S. and the Philippines. Duterte threatened to scrap the agreement in February. He stepped back from his position in June as the situation regarding the ongoing territorial dispute between China and the Philippines in the South China Sea continued to escalate.

The National Union of People's Lawyers in the Philippines called the pardon a "shameless sell-out," reported the Manila Bulletin.

The Indonesian arm of Amnesty International and the Civil Society Coalition for the Protection of the Rights of Vulnerable Groups blasted the police, accusing them of targeting LGBTQ people and violating their rights.

The coalition is a network of the Institute for Criminal Justice Reform, LGBTQ rights group Arus Pelangi, and the Indonesian Legal Aid Institute, among other organizations.

"Raids like these send a terrifying message to LGBTI people," Amnesty International Indonesia Executive Director Usman Hamid said in a September 3 statement from the organization responding to the arrest, calling for the release of the men and for Indonesian authorities to drop all charges.

"[Indonesian authorities] must also stop these arbitrary and humiliating raids and stop misusing laws against loitering or public nuisance to harass and arrest people accused of same-sex activity," he continued.

"No one should be targeted and arrested because of their actual or perceived sexual orientation and gender identity," added Hamid. "The police should be keeping everyone safe, not stoking more discrimination."

Homosexuality isn't illegal in Indonesia, with the exception of the Aceh province, despite the nation having the largest Muslim population in the world.

That hasn't deterred the politicians and the government from using homosexuality as a political weapon against opponents or ushering out harsh crackdowns from education to media for many years.

Police raided a private party of nearly 60 men at a hotel in Kuningan, South Jakarta August 29.

Authorities identified nine of the men as organizers of the party and listed the 47 other men as witnesses.

The police charged the nine men with being pimps and funding or facilitating pornographic services despite organizers not profiting off of the party, the coalition noted.

The pornography law carries a 15-year sentence if the men are found guilty, reported the Jakarta Post.

The coalition accused the Jakarta police of ignoring the law, failing to notify the suspects' relatives of their arrest, and not providing access to legal assistance, which they should have received under their right to a fair trial, reported the Post.

The arrests only came to light five days later during a police press briefing, according to the coalition.

The recent raid isn't the first time the country has been criticized for targeting the queer community.

The international governmental body has urged Indonesia to combat anti-LGBTQ stigma and to release anyone detained based on perceived or real identity as sexual orientation and gender identity, reported the Associated Press.

Cayman Islands legalizes civil unions for same-sex couples
Same-sex Caymanian couples will be able to legally enter into a civil union before the end of the month.

He said it struck the right balance between the law and respecting marriage.

"Today we will end the discrimination being suffered by Caymanians and others on our islands whilst protecting the institution of marriage," Roper said in a statement to the media following enacting the law. "This action does not alter or undermine the strong Christian heritage and values of the people of the Cayman Islands. No one is being asked to change their long-held beliefs."

"We recognize this is a huge achievement and step forward on the road to equality for all in Cayman," said Caymanian lawyer Chantelle Day in a statement supporting Roper's passage of the bill on Friday.

Day's marriage equality case was appealed to the Judicial Committee of the Privy Council, the highest court for British Overseas Territories, in London.

She criticized the processes to get legal recognition of same-sex relationships, adding that Roper shouldn't have had to use his reserve powers to uphold the rule of law and the government shouldn't have wasted time and money for this ultimate and "inevitable result."

Same-sex and opposite-sex couples will be able to register their relationships starting September 25.

Under the new law, same-sex couples were granted the same rights as married couples.

Roper used his powers under Section 81 of the Cayman Islands' Constitution that allows United Kingdom government ministers to use their reserve powers to assent on disputed legislation. He justified the move to ensure the Cayman Islands not only complied with its own court order issued in November 2019, but also international law under the terms of the European Convention on Human Rights.

The Civil Partnership Bill was defeated in the Legislative Assembly July 29.

Day and her fiancée, Vickie Bodden Bush, who is from the U.K. and Honduras, appealed their same-sex marriage case to the Privy Council earlier this year after they were granted and then denied same-sex marriage last year. The council hasn't slated a date for the case to be heard.

A similar case is Bermuda, the largest British Overseas Territory, is set to be heard by the Privy Council February 3-4

Cayman Islands LGBTQ rights organization Colours Cayman stated the law was a "significant step forward" while reiterating that same-sex marriage is "the only true means of achieving equality." 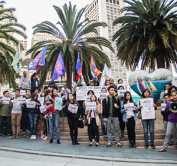