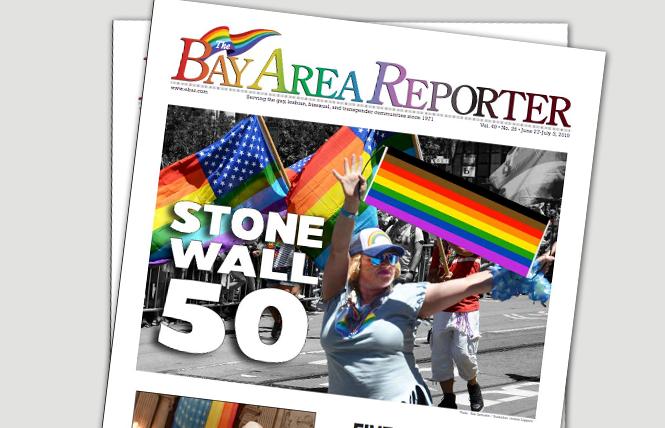 The Bay Area Reporter could be negatively affected if Assembly Bill 5 becomes law.

The newspaper industry in California, which has suffered steep declines in subscribers and advertising revenue over the past decade, is about to be dealt what will likely be a fatal blow under Assembly Bill 5. The bill, which is mainly characterized as a fight over whether Uber and Lyft drivers should be company employees, has ensnared many other industries that rely on contractors. In our case, AB 5 would be a crippling blow, as the Bay Area Reporter relies on about 50 freelance reporters, critics, photographers, and delivery drivers.

An opinion essay in Tuesday's San Francisco Chronicle painted a grim picture if AB 5 becomes law. Thomas W. Newton, executive director of the California News Publishers Association, and James W. Ewert, its general counsel and advocate, wrote that AB 5 could end home newspaper delivery as we know it. Small news and media outlets like ours simply cannot hire additional full-time or part-time employees — that's why we, and many other industries, rely on contract workers.

The bill became critical following a California Supreme Court decision that overruled a 30-year precedent by declaring that workers can maintain independent contractor status only if a business and contractor can pass a three-part test, Newton and Ewert explained. Known as the ABC test, it's the B part that would affect many industries under AB 5 because it allows independent contractor relationships "only where the worker performs work that is outside the usual course of the hiring entity's business."

The bill was supposed to create a balance by both codifying the ABC test and providing exemptions to protect independent status for certain time-tested independent work relationships, Newton and Ewert wrote.

Instead, AB 5 "would force all businesses to hire independent contractors as employees — unless the business has been given a special exemption by the Legislature. So far, the Legislature has refused to grant one to the newspaper industry," they explained, and went on to note that exemptions have been granted to doctors and real estate agents.

Let's be clear: newspapers need an exemption to AB 5.

Gay state Senator Scott Wiener (D-San Francisco), said that a deal has been struck whereby freelance writers and photographers could produce 35 assignments a year and still be considered a freelancer. Photographers could send multiple photos from an event that would count as a single submission. But that's unrealistic in our case, and for many other publications. What's more, many freelancers may quit entirely if they are limited to such low production volume; after all, they make their living based on the number of articles they write or photo assignments they complete for us and other media. We would have to hire another 50 freelancers — at least — in an economy and region where it's increasingly difficult, if not impossible, to do so.

We're not alone. Any business that relies on contract workers will be imperiled if AB 5 passes.

Governor Gavin Newsom indicated his support for the bill in a Labor Day op-ed in the Sacramento Bee, writing that AB 5 extends "critical labor protections to workers by curbing misclassifications." But that misses the bigger picture in which freelancers are integral to a newspaper's, or any other business to survive. Yes, the Chronicle has a union, as do most other large papers in the state, but it still uses freelancers to fill important roles. We agree that drivers for Uber and Lyft should be able to unionize, but that shouldn't come at the steep cost of wiping out entire industries.

AB 5 has passed the Assembly and awaits action in the Senate. We call on Wiener, lesbian Senate President Pro Tem Toni Atkins (D-San Diego) and their colleagues to include an exemption for newspapers in the bill. The deal that is currently on the table is woefully inadequate. Freelancers should not be restricted in the number of articles or photos they produce.

Other businesses should also take note of this legislation. Uber and Lyft drivers may see the benefit of AB 5, but a lot of other workers will be left at the curb.