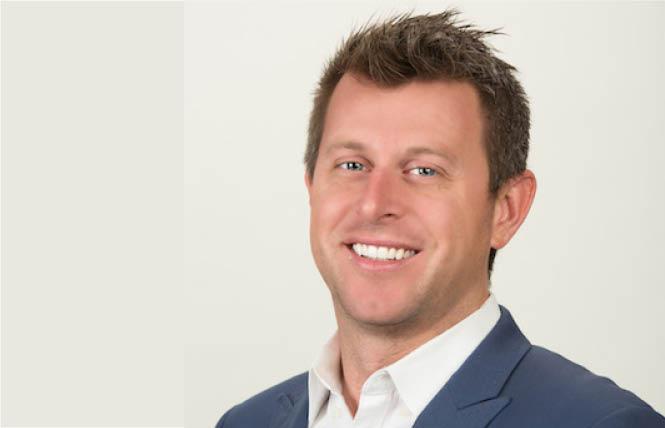 Joe Gregorich is the new board president of Equality California, which celebrates its 20th anniversary this year. Photo: Courtesy Joe Gregorich

As it celebrates its 20th anniversary this year, statewide LGBT advocacy organization Equality California has installed a quartet of new board leaders who will serve two-year terms through the end of 2020.

Its new board president is Joe Gregorich, who had served as vice president the last two years. The gay Sacramento resident is director of state government affairs at the not-for-profit health system Sutter Health.

Former board secretary Scott Malzahn, a gay man who lives in Los Angeles, has been elected to vice president. A partner at the law firm Baker Marquart, where his practice focuses on general business litigation and intellectual property disputes, Malzahn was a member of the trial team in Perry v. Schwarzenegger, the federal lawsuit that won back marriage rights for same-sex couples in California. He also teaches constitutional law at the University of Southern California Gould School of Law.

Succeeding him as secretary is Cecilia Cabello, who is vice president of the Los Angeles Board of Public Works and lives in the city's Echo Park neighborhood with her husband. The public policy expert has worked for Los Angeles Mayor Eric Garcetti and served as California state director of Hillary for America in 2016.

Fellow Los Angeles resident J. Andrew "Drew" Murphy, a gay man, is the new board treasurer. He works at Edison International as its senior vice president of strategic planning.

Gregorich, 36, succeeds fellow Sacramento resident Mandy Lee as EQCA's board president, who was termed out in December. Lee came under fire in the fall from San Francisco LGBT activists upset with her defense of school board candidate Josephine Zhao, who suspended her bid due to her past transphobic views.

(Lee is expected to take part in a panel discussion Monday — January 28 — at San Francisco's LGBT Community Center about the intersection of being LGBT and Asian-American.)

A Vacaville native, Gregorich graduated from UC Santa Cruz with a degree in economics and has lived in the state's capital since 2005. Ten years later he joined EQCA's board of directors.

His term as president will coincide with the 2020 presidential race, meaning Gregorich and the leaders of EQCA's political action committee will have to decide which candidate to endorse. It is almost assuredly going to be a Democrat, as EQCA has vocally criticized the various anti-LGBT policies that President Donald Trump's administration has enacted and is suing him in federal court over his ban against transgender people serving in the military.

EQCA faced criticism in 2015 for endorsing former Secretary of State Hillary Clinton before she was even a declared candidate for president in the 2016 race. And it did so without interviewing her or sending her a questionnaire to gauge where she stood on various LGBT issues.

In a March 2015 editorial, the Bay Area Reporter wrote that EQCA "blew it" with its early endorsement of Clinton because it had "missed an opportunity as the premier statewide LGBT organization to influence presidential politics."

Coincidentally, that same year EQCA said it would refrain from endorsing a candidate in the race for one of the state's U.S. Senate seats, which included then-state Attorney General Kamala Harris, until the contenders had answered its questionnaire. Four years later Harris, who won the Senate seat, is seen as a frontrunner to become the Democratic presidential nominee next year.

California lawmakers moved up the state's primary election to March 2020, giving Golden State voters greater say in choosing the nominee. Asked if EQCA would again endorse so early in the upcoming presidential race, Gregorich doubted it would.

"I would think we would wait to endorse until closer to the primary," he said. "It is something we will work through the entire PAC committee on. We will have conversations at that time once we see the field of who is going to be running."

He said the PAC currently is focused on municipal elections this year in West Hollywood and the special elections for two vacant state Senate seats in southern California. Neither of the legislative races currently has any out LGBT candidates running.

In terms of EQCA's continued relevance in a state fully controlled by Democrats and seen as a leader in advancing, and protecting, LGBT rights, the organization continues to play a vital role in shaping groundbreaking LGBT legislation that other states can adopt, argued Gregorich.

"I think in California we have done a lot to further civil rights for members of our community, but there is still a lot of work to be done," he said.

In particular, Gregorich said EQCA is focused on ensuring schoolteachers "have the tools and training they need" to support their LGBT students and that LGBT youth do not face discrimination. EQCA is expected to release this year a first-of-its-kind report card on how the state's school districts are teaching LGBT history and protecting LGBT pupils.

Another area of focus for EQCA, noted Gregorich, "is making sure transgender inmates are treated with dignity and respect."

Due to its having hired a lobbyist in Washington, D.C., EQCA also has a role to play nationally, Gregorich said, in pushing back against the Trump administration as it rolls back LGBT rights.

"We are actively fighting to protect the LGBT community against the Trump administration," he said.

CA marriage plaintiff joins Gov Newsom's team
Back in the Golden State, Gregorich said he has been pleased so far by newly sworn in Governor Gavin Newsom's gubernatorial hiring decisions. As the B.A.R. has noted previously, Newsom has named or appointed a number of LGBT people to powerful posts in his administration.

One of the more recent appointments was that of Kris Perry, a national leader in early childhood policy. She is now the deputy secretary of the California Health and Human Services Agency for Early Childhood Development and a senior adviser to Newsom on implementation of early childhood development initiatives.

She previously was president of Save the Children Action Network and, prior to that, was executive director of the First Five Years Fund, which advocates for early childhood development programs.

Perry, 54, who lives in Berkeley with her wife, Sandy Stier, will earn $170,000 a year. She was the lead plaintiff in the aforementioned federal lawsuit that led to the striking down of Proposition 8, the 2008 California voter-approved ballot measure that banned same-sex marriage and was overturned in 2013.

"Fired up and ready to work with Gavin Newsom and Ann O'Leary as Deputy Secretary of California Health and Human Services Agency and Senior Adviser to to (sic) the Governor on Implementation of Early Childhood Development Initiatives to create a California or (sic) All!," Perry posted to Facebook after the news of her appointment was announced last Monday, January 21.

O'Leary is Newsom's chief of staff.