Wiener reintroduces bill to exempt some cannabis from state taxes 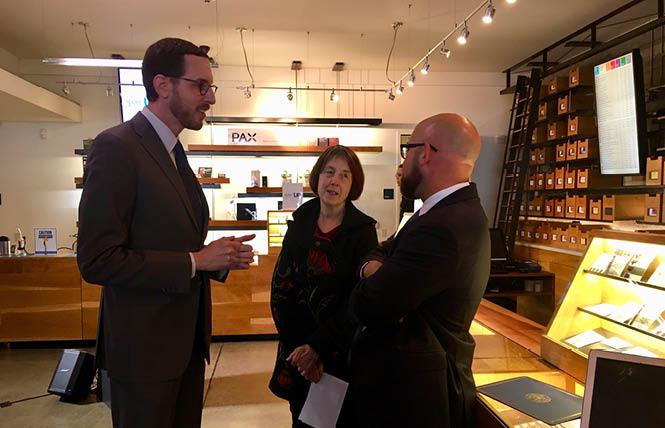 The proposed bill, announced at a news conference November 29, is almost identical to legislation Wiener carried earlier this year. While both the Senate and Assembly overwhelmingly approved it, outgoing Governor Jerry Brown vetoed the bill (https://www.ebar.com/news/news//266279?ch=news≻=news&sc2=&id=266279).

Wiener, a gay man and former San Francisco supervisor, is optimistic that Governor-elect Gavin Newsom, who has a long history of support for cannabis, will approve the new bill.

It is "incredibly important" to make sure low-income people can "continue to access their medicine," Wiener said at the news conference, which was held at SPARC dispensary in the city. It has continued its compassionate program despite the tax burden that was imposed by Proposition 64, which legalized the sale of adult use cannabis but added new taxes to programs donating medicine.

The proposed bill, co-authored by state Senator Nancy Skinner (D-Berkeley), will be introduced in January when the new Legislature reconvenes, she said.

"Just like we don't pay taxes on prescription medicine, we should not tax medical cannabis," Skinner said.

At the news conference Sweetleaf Collective founder Joe Airone (https://www.bayareareporter.org/news/article.php?ch=news≻=article.php) said his organization donated over 100 pounds of cannabis last year, before taxes were levied against donors. This year, under Prop 64, such a donation would cost donors "tens of thousands" of dollars, said Airone.

"This is incredibly cost prohibitive," he added.

Since the beginning of the year, said Airone, many low-income terminally ill patients, children, veterans, and seniors have been kept from receiving free medical cannabis.

"This bill will reopen the door," he said.

With the enactment of Proposition 64, legalizing adult use of cannabis, taxes were put in place for both recreational and medical use of marijuana: a 15 percent excise tax and 10 percent cultivation tax. Those are passed on to everyone.

There is also a sales tax, which in San Francisco is 8.5 percent. Medical marijuana patients in the city can go to the health department, where for $100 a year they can get a card and then can avoid the sales tax only.

Gay District 8 Supervisor Rafael Mandelman, adding his support, said that Prop 64 has "crippled compassionate care programs to the point where most have closed."

"There are people in my community who would not be alive today were it not for access to cannabis," said Mandelman, who attended the news conference.

"I want to thank Senator Wiener for taking this important step to make sure compassionate care programs can keep their doors open and continue to provide relief for the people who need it most," he said in a statement.

According to Wiener, the new taxes on medical cannabis donated by not for profit programs were an "oversight" meant for businesses and need to be eliminated as soon as possible.