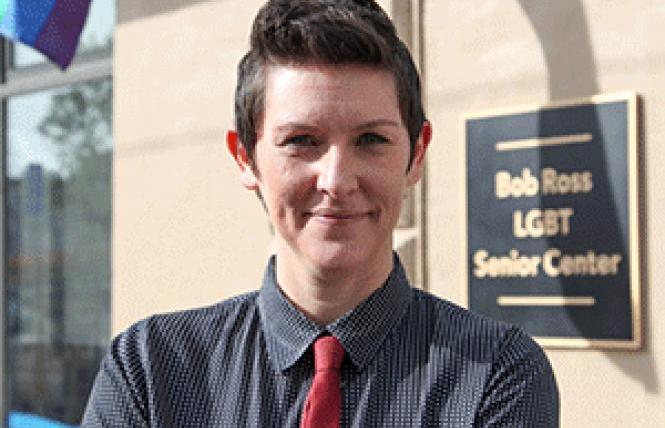 Applicants looking to be selected for 57 units of affordable housing aimed at LGBT seniors in San Francisco will have seven days to enter into the lottery starting next Friday, December 7.

The last day for people to submit the required application form will be the following Friday, December 14. It is expected that upward of 3,000 seniors, both LGBT and straight, age 62 and older will seek to live at the new building under construction at 95 Laguna Street.

Openhouse, a nonprofit provider of LGBT senior services in San Francisco, disclosed the application window dates late on Wednesday, November 21, the day prior to Thanksgiving. It has since mailed out letters to those seniors who have indicated to the agency their interest of living in the building, which will be called the Marcy Adelman and Jeanette Gurevitch Community at 95 Laguna after the co-founders of Openhouse.

It will also be highlighting the application period in its December monthly newsletter that will soon be emailed out to clients and supporters of Openhouse. The lottery will be held at 10 a.m. Tuesday, January 15, in the San Francisco Main Library's Latino Room.

Applicants do not need to be present for the lottery, which will be run electronically and the results posted January 22. Those selected are expected to move into their new homes in April.

While the application window is hitting in the middle of the busy holiday season, Openhouse Executive Director Karyn Skultety, Ph.D., told the Bay Area Reporter this week that she isn't concerned about the timing.

"In some ways leading up to the holidays is when people are most aware they don't have a home that is safe or have a home that is welcoming to them," said Skultety, who is bisexual and started working at Openhouse in February last year. "In some ways this is very fitting to be in the time period leading up to the holidays because this is our mission, to create a chosen family for older LGBTQ seniors. One of the ways we do that is the housing and the other is through the services and community building that we offer."

The seven-story $40 million building at 95 Laguna Street is a collaborative effort between affordable housing developer Mercy Housing and Openhouse. The two agencies in late 2016 opened the project's first phase, which saw a former college building on the edge of the city's gay Castro district remodeled into 40 rental units, one of which is for the resident manager.

It is known as the Openhouse Community at 55 Laguna. While any senior, LGBTQ or straight, who met the eligibility requirements could apply to live there, a majority of the residents selected, 68 percent, identify as LGBTQ.

Openhouse and city leaders are hoping to see a similar outcome with the residents living at 95 Laguna.

"Two years ago, Openhouse opened the doors of 55 Laguna, the city's first affordable, LGBTQ-welcoming housing for seniors. We still celebrate the community and sense of home 55 Laguna has offered to its residents, and we are excited to soon provide additional affordable housing next door at 95 Laguna," noted the agency in an email in early November to those on the interest list for the additional housing.

New building
The new building will have 7,000 square feet of community space for Openhouse to utilize. It will share an outdoor courtyard with 55 Laguna, which not only houses residents but also Openhouse's staff offices at 65 Laguna Street. It is known as the Bob Ross LGBT Senior Center due to a $1 million donation from the foundation of the B.A.R.'s founding publisher.

Openhouse announced Wednesday afternoon that it had received a $250,000 grant from Gilead Sciences, Inc., to build a Living Wall and Mural honoring long-term survivors of HIV and AIDS in the community center being built in the new building that will have the address of 75 Laguna Street. The art installation will be in the central staircase of the new building.

"Recognizing long-term survivors in the context of the larger LGBTQ movement is critical in the battle against stigma and ageism," stated Tez Anderson, founder of Let's Kick ASS (AIDS Survivor Syndrome), an advocacy group for HIV long-term survivors and serves on the steering committee for the art project. "We must shift the conversation from surviving to thriving. We must now come together and focus on healthy aging with HIV."

Anyone who entered the lottery for 55 Laguna and did not get accepted must submit a new application for 95 Laguna if they meet the age requirement of 62 or their spouse, partner, or roommate they will be living with is at least 62 years of age. The age limit for the new building is higher than it was for 55 Laguna, which was set at 55 years old, due to changes in the rules governing the financing of the new building.

The other eligibility criteria are largely the same, such as applicants must meet certain income thresholds and either live or work in San Francisco. Applicants who were displaced by redevelopment in the city's Western Addition and Hunters Point neighborhoods in the 1960s and 1970s will be given first preference.

Those seniors who were displaced by an Ellis Act or owner move-in eviction will be given second preference. Residents of the District 8 supervisorial district or seniors living within a mile and a half of the building will be eligible for up to 40 percent of the units.
The rent for the building's 28 studio units will be $1,000 per month, in the range of $1,056 to $1,140 for the 27 1-bedrooms, and between $1,257 and $1,270 for the two 2-bedrooms to be selected by the lottery.

There will be a total of 79 new pet-friendly units at 95 Laguna, with one set aside as the living quarters of the property's resident manager. Fifteen units will be designated for people who are homeless or at risk of homelessness, with the remaining six units specifically for people living with HIV or AIDS. Those residents will be selected through a different process outside of the lottery.

Openhouse is encouraging people to use the online five-page application form to enter into the lottery via the DAHLIA San Francisco Housing Portal at http://housing.sfgov.org.

The agency is hosting drop-in question and answer sessions at 65 Laguna from 1:30 to 5 p.m. on the next two Saturdays, December 1 and December 8. It is also hosting the sessions from 4 to 6 p.m. Wednesday, December 5, and from 10 a.m. to noon Thursday, December 6.

There will also be a community informational meeting about the lottery process at 5 p.m. Tuesday, December 11, at 55 Laguna.

People with questions can call the Openhouse Housing Hotline at (415) 230-0634. For more information about the eligibility requirements to apply for the housing at 95 Laguna, visit https://www.openhouse-sf.org/95Laguna.