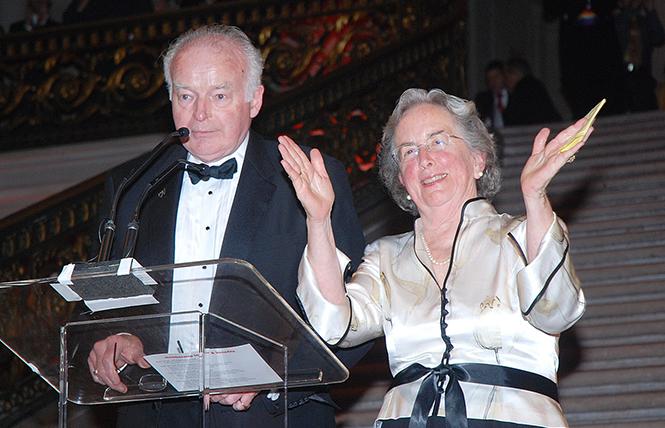 Sam and Julia Thoron acknowledged the cheers of the crowd following their acceptance of the Equality Award at Equality California's annual dinner in 2010. Photo: Rick Gerharter

Sam Thoron, who was involved in the leadership of PFLAG for many years, died in his sleep November 17 in San Francisco. He was 79.

His family said that Mr. Thoron had recently been diagnosed with esophageal cancer.

Mr. Thoron and his wife, Julia, were longtime allies to the LGBT community, which became important to them after their daughter, Elizabeth Thoron, came out. He served as president of PFLAG's San Francisco chapter and served on the national PFLAG board for 10 years, including a stint as president from 2002-2006. According to an obituary prepared by his family, Mr. Thoron was passionate about helping other parents learn to accept, support, and advocate for their gay, lesbian, and transgender children.

"Service on the board has been the most challenging and the most rewarding assignment I have ever undertaken," Mr. Thoron told the Bay Area Reporter in a 2015 interview. "Attempting to effect social change is always interesting. Progress is often halting, at best."

At the time, Mr. Thoron said the mission of PFLAG had changed over the years. He said that in 1990 the organization was focused primarily on gay and lesbian issues.

"The organization and its mission have evolved over time," he said. "We have gradually broadened our focus to be much more inclusive, first with bi and then to trans people. Now we include the variety of orientations and the spectrum of gender identity, advocating full equality and safety for all."

The couple's advocacy went statewide in 2008, when they were featured in the first television campaign ad against Proposition 8, the same-sex marriage ban. Both Mr. Thoron and his wife signed the ballot argument against Prop 8 in the California Voter Information Guide, stating that they simply wanted their lesbian daughter to have all of the same rights and opportunities as their two straight sons. (Prop 8, which voters passed that November, was ultimately overturned by the federal court and same-sex marriage became legal in the Golden State in 2013.)

Kate Kendell, the outgoing executive director of the National Center for Lesbian Rights, told the B.A.R. that she was heartbroken to hear of Mr. Thoron's passing. In 2008, Kendell was a member of the No on 8 campaign's executive committee.

"Sam and Julia were there for queer folks years before so many of their generation," Kendell wrote in an email. "They had their own lesbian daughter, but they parented countless other LGBTQ kids and adults by simply embracing them with their love. Sam was both an LGBTQ advocate and a true renaissance man. His standard greeting when you asked, 'How are you?' was 'better for seeing you.' It was an honor to know him and a huge loss that he is gone."

Geoff Kors, a former executive director of EQCA who is now a Palm Springs city councilman, said he was saddened by the news.

"He was an incredible leader, passionate advocate, and wonderful person," Kors wrote in an email. "Through his advocacy and work with families of LGBT individuals with PFLAG and many other organizations, Sam helped advance legal equality and promote understanding and acceptance."

Mr. Thoron was also active in Marriage Equality USA and Freedom to Marry, where he served as a board member. He was a supporter of the Horizons Foundation, which provides grants and other services to LGBTQ nonprofits.

"Sam was a loving, gentle, and tireless advocate for marriage equality — a straight ally general in the love warrior army — he always admonished us to 'start where you are and do all you can with what you have,'" she wrote in a Facebook message.

In 2015, Mr. Thoron and his wife were honored by the San Francisco LGBT Pride Celebration Committee as recipients of the Jose Julio Sarria History Maker Award, in recognition of their extraordinary contributions to the way society views the LGBTQ community.

Mr. Thoron was dedicated to his family, starting with his wife, Julia, of 55 years, whom he always introduced as "my lovely bride." His family said that he parented with both joy and seriousness, forging connections with his children and grandchildren through bedtime stories, stuffed animals, sailing and motor-boating adventures, and earnest, wide-ranging conversations over dinner. He cared deeply for his extended family and was a link that kept various branches of the family together.

Mr. Thoron was born in Washington, D.C. on June 15, 1939, the third child of Violet Spencer Thoron and Benjamin Warder Thoron. He was educated at St. Albans School in Washington, D.C., Pomfret School in Connecticut, and Harvard College, with a break during his college years to serve in the U.S. Army in an artillery unit stationed in Germany. While at Harvard he met Julia Harding Miller. They were married in December 1962 in San Francisco.

Mr. Thoron's lasting sources of meaning and personal satisfaction were found in his 35 years of sobriety and connection to other recovering alcoholics in Alcoholics Anonymous, in his many years of leadership in service and advocacy organizations working on behalf of the LGBTQ community and their allies and in the fight for marriage equality, and in his deep connections to his family, both immediate and extended.

Mr. Thoron stopped drinking in 1983. For 35 years, he regularly attended AA meetings and remained sober until the end. He found his own recovery strengthened when he helped those facing similar struggles, and he prized his relationships with all his friends in the recovery community. Mr. Thoron freely admitted that if he'd kept drinking he would have lost both his family and his life a long time ago, and he was continually grateful for his hard-won second chance, his family said.

He was an avid bird watcher, loved "simply messing about in boats," and could often be found on the choppy waters of Tomales Bay enjoying both of these activities. He cherished the family property on Martha's Vineyard where he had spent summers as a child, and was deeply committed to the stewardship of Seven Gates Farm, where he served as president, as his father had.

In addition to his wife, Mr. Thoron is survived by his children, Benjamin, Joseph, and Elizabeth and their spouses, Patricia Saraniero, Lisl Thomsen, and Lisa Mitchell; seven grandchildren; his sister, Ann A. Hale of Bedford, Massachusetts, the extended Thoron family; and the beloved Miller family of Marin County. He was predeceased by his brother, Christopher Thoron, and his parents.

The family encourages Mr. Thoron's friends to consider a donation in his memory to one of the organizations that was important to him: the PFLAG Thoron State Advocacy fund at http://www.pflag.org/thoron-state-advocacy-fund; Point Blue Conservation Science at https://www.pointblue.org; or Horizons Foundation at http://www.horizonsfoundation.org/s/give/.

A memorial service is planned for Saturday, January 5, at 10:30 a.m. at the First Unitarian Universalist Society of San Francisco, 1187 Franklin Street.