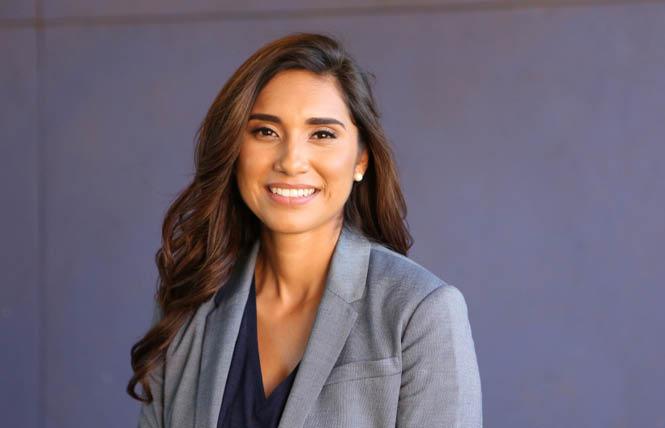 Assemblywoman Sabrina Cervantes is holding onto a lead in her re-election race. Photo: Cervantes for Assembly campaign

The California Legislative LGBT Caucus will see its membership shrink in the next legislative session for the third time since it was established in 2002. Come December it will have seven members, should the current outcomes as of Wednesday remain the same in two legislative races with lesbian candidates and a statewide contest with a gay state senator.

Currently, there are eight out members of the state Legislature, four each in the Assembly and Senate. Set to depart in early 2019 is gay state Senator Ricardo Lara (D-Bell Gardens), as he now holds a commanding lead in the statewide insurance commissioner race. Lara is poised to make history as the first out candidate to win a statewide post in the Golden State.

As of Wednesday morning, Lara had seen his vote count increase to 4,480,114 votes for 51.5 percent of the total. His opponent, Republican turned independent Steve Poizner, trailed behind with 4,221,931 votes or 48.5 percent of the total. Poizner, who had previously held the position from 2007 through 2011, has seen his lead in the race on Election Night steadily decline as more ballots are tabulated.

With a record-setting 18 out candidates seeking legislative seats this year, LGBT political leaders had hoped to see an increase in the LGBT caucus' ranks when the winners of the November 6 election take their oath of office in early December. To hit a historic high of nine LGBT legislative caucus members, two out non-incumbents would need to be elected.

Following the June primary, there were 12 legislative races with candidates who identified as lesbian, gay, or queer. Of those, only a trio of out Assembly members easily defeated their opponents on Election Night. (None of the four out state senators were seeking re-election this cycle.)

The fourth incumbent in the lower chamber, lesbian Assemblywoman Sabrina Cervantes (D-Corona), awoke the morning of November 7 to learn she had a three-vote lead over her Republican opponent, federal prosecutor Bilal "Bill" Essayli, for her 60th Assembly District seat. Over the next few days the vote count yo-yoed between the two, but by Monday afternoon Cervantes had begun to break away.

In another Riverside County contest, lesbian aging expert Joy Silver appears headed for defeat in her race for the state Senate 28th District seat. Senator Jeff Stone (R-La Quinta), one of the most anti-LGBT members in the Statehouse, has continued to see his vote count edge upward since Election Night.

The seven other non-incumbent out legislative candidates all lost their races. Most were not expected to win, as they were either running against incumbent lawmakers or outspent by their opponents for an open seat.

In the Bay Area the only competitive legislative race with an out candidate was the contest for the open 15th Assembly District seat, which stretches from Richmond south into parts of Oakland. Assemblyman Tony Thurmond (D-Richmond) opted to run for state superintendent of public instruction, a race he now holds a slight lead in, rather than seek re-election. [See related story.]

But, as the Bay Area Reporter noted last week, former President Barack Obama staffer Buffy Wicks defeated lesbian Richmond City Councilwoman Jovanka Beckles in their closely watched race. As of Tuesday, Wicks' vote count stood at 79,358, or 55.2 percent of the total, while Beckles was at 44.8 percent with 64,381 votes.

Beckles has yet to concede, as her campaign announced last week that it would make a final statement when there was a "full accounting of the votes." She did thank her supporters in an email sent Friday, in which she wrote she was hoping to still hear "good news" as the ballot count continued.

"Whatever the result, we are victorious. We've shown what we're capable of when we come together," wrote Beckles, who would have been the first out state lawmaker from the East Bay, as well as the first LGBT immigrant and out African-American elected to the Legislature.

Her political future is now uncertain, as Beckles will be leaving the city council when her term expires at the end of the year.

Based on the latest election results, it appears the California Legislative LGBT Caucus will be comprised in 2019 of two lesbian senators, a gay senator, two lesbian assemblywomen, and two gay assemblymen. It twice before has seen its ranks drop by one member following an election over the last 16 years.

The first time was in 2006 when Mark Leno, then a gay man serving in the Assembly, defeated incumbent lesbian state Senator Carole Migden for her seat based in San Francisco. The caucus that year fell from six to five members.

After the 2014 November election the membership dipped from eight to seven members following the departures of termed out gay Assemblymen Tom Ammiano and John A. Perez from their San Francisco and Los Angeles districts, respectively, and the election of one newcomer, gay Assemblyman Evan Low (D-Campbell).

There is a chance the LGBT caucus could return to having eight members in 2019 should an out candidate win the special election for Lara's Senate seat, which would be called once he is sworn in as insurance commissioner. Gay Long Beach Mayor Robert Garcia is often mentioned as a potential candidate, though one local publication reported last week that it is doubtful he would enter the race.

Web Extra: For more queer political news, be sure to check http://www.ebar.com Monday mornings for Political Notes, the notebook's online companion. This week's column reported on CA voters retaining the state's supreme court and appellate judges, including the two gay men and one lesbian serving on appeal courts.
Keep abreast of the latest LGBT political news by following the Political Notebook on Twitter @ http://twitter.com/politicalnotes .