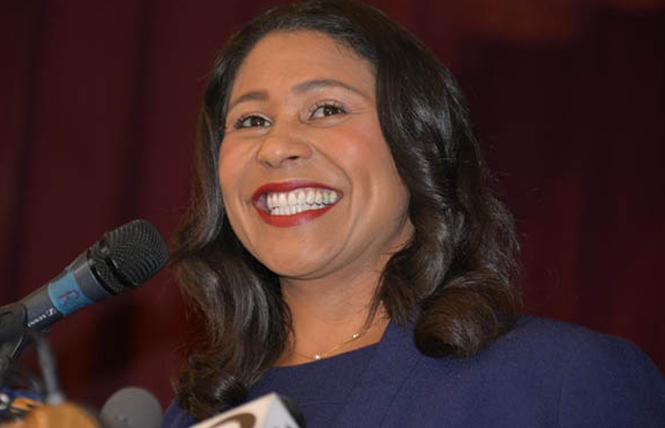 San Francisco will receive a grant from the Centers for Disease Control and Prevention to help close gaps and mitigate barriers in HIV prevention and care services, particularly among homeless people.

Mayor London Breed is scheduled to announce Thursday, November 1, a grant that will fund Project Opt-In, a four-year demonstration program to improve HIV patient outcomes in San Francisco. The grant is $2 million annually for four years.

"Over the past three decades, the city of San Francisco has made significant progress toward reducing the number of new HIV infections each year, and improving the available services for people living with HIV," said Breed in a news release. "As mayor, I remain committed to our goal of Getting to Zero, which will take hard work and dedicated services. We know that some groups still suffer disproportionately high rates of HIV infections, like our homeless population. With Project Opt-In, we are taking an important step forward in reaching those most impacted by HIV by providing critical and innovative services where they are."

The Getting to Zero initiative aims to make San Francisco the first city to achieve the UNAIDS goals of eliminating new HIV infections, deaths due to HIV/AIDS, and stigma against people living with HIV by 2020. It relies on a three-prong strategy of expanded access to PrEP, rapid initiation of antiretroviral therapy, and retaining HIV-positive people in care.

Although the number of newly diagnosed HIV infections continued to decline overall last year, the homeless population saw an upward trend of new cases. A total of 221 people were newly diagnosed with HIV in 2017, of which, 31, or 14 percent, were homeless, according to the most recent Department of Public Health's HIV Epidemiology Annual Report.

Project Opt-In aims to address this issue. The four-year project will examine gaps in services while also focusing on transforming health care delivery and practices to lessen the long-term need for such services, according to a news release. This includes homeless outreach, intensive case management, and other low-threshold support services.

Tracey Packer, director of Community Health Equity and Promotion for the DPH, told the Bay Area Reporter more about Project Opt-In and what the funding will do.

"The work is focused on going out and meeting people where they are," Packer said. The grant will help increase staff, strengthen Project Opt-In's monthly health fairs, and greatly bolster HIV and hepatitis C screening for the homeless community. It will also fund data and research to help inform the system transformation, she said.

"The current system we have is not meeting the needs of people living outside," Packer said. "This will help us understand how to change the system and lower barriers to care and services to people with or at risk of HIV."

Another aspect of Project Opt-In will be to increase access to preventative medicine like PrEP, which, if taken as prescribed, significantly reduces the risk of HIV transmission. As previously reported by the B.A.R., locally, PrEP use has risen steadily in San Francisco over the past half-decade, but there are pockets of persistently higher HIV incidence and poorer outcomes after diagnosis, especially among African-Americans and homeless people. According to a news release from the mayor's office, while 72 percent of all San Franciscans living with HIV were undetectable in 2016, only 32 percent of people living with HIV and experiencing homelessness were undetectable.

Project Opt-In will also partner with organizations that are already providing preventative and other care services to vulnerable populations such as the San Francisco AIDS Foundation and Glide, a nonprofit whose parent is Glide Memorial United Methodist Church. SFAF offers hepatitis C testing at various homeless encampments and at its Sixth Street harm reduction center.

"We need comprehensive strategies that reach people in places and at times when they are ready to engage in treatment," said Lara Brooks, chief program officer at SFAF. "Knowing people face challenges like housing instability or homelessness, providers have an imperative to offer multiple, low-threshold access points so people can get the care they need. One important part of this project is the expansion of hepatitis C testing opportunities at homeless encampments or the provision of HCV treatment."

Packer said DPH and the partnering organizations understand the need for new, innovative ways to reach vulnerable and at-risk communities.

"We recognize we need to reach [the homeless population] in a different way," Packer said.