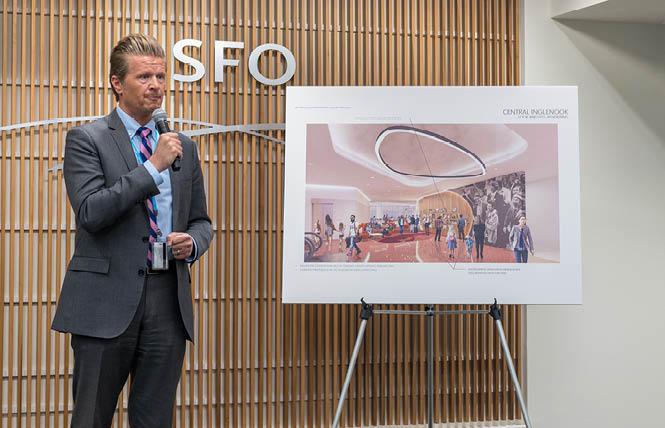 San Francisco International Airport is seeking the public's help in creating an exhibit about the late gay Supervisor Harvey Milk inside the terminal named in his honor.

It is just one of the elements the city's airport is planning for the under renovation Terminal 1, which was renamed Terminal 1: Harvey B. Milk Terminal by the supervisors and former mayor Mark Farrell this spring. Also to be installed will be new signage and artwork throughout the terminal, as well as a temporary display on a construction wall in a boarding area of the terminal.

Tuesday morning airport officials launched a crowd-sourcing campaign and asked anyone with photos of Milk to submit them via the website http://www.flysfo.com/harveymilkexhibition. The deadline to do so is December 14.

Airport Director Ivar C. Satero, speaking at a news conference inside the airport's International Terminal, told reporters it was "clear the community really needed to be part of this." He encouraged the public to send in not only photos of Milk but also "photos from that era and his campaign. The community piece of this is so important."

The images selected will be used to illustrate the temporary exhibit in a post security area of Terminal 1 that the airport plans to unveil next July. It will be timed for when passengers return to the terminal due to the re-opening of the first nine gates in Boarding Area B and will remain up through May 2021.

Several of the submitted photos should also be used in the permanent display about Milk that will be located in a pre-security area in Terminal 1 South. Located on the departures level, it will be housed in what the airport is calling the Central Inglenook.

A lighted art piece to be mounted curbside at the Milk terminal is budgeted at $850,000. A call for artists should be announced in December.

The last of the artwork featuring Milk would be installed in the terminal's three-story atrium. Budgeted at $1.1 million, it would be unveiled in November 2022 when the full terminal is slated to open.

The first of SFO's four terminals, Terminal 1 is undergoing a $2.4 billion remodel that is being rolled out in stages. Milk's name will be prominently displayed on the facade of the terminal, visible to those entering the airport's domestic terminal loop by vehicle or the AirTrain.

Those entering Terminal 1 via the parking garage or the AirTrain station will also see Milk's name displayed on the entrances into the building, noted Farrah Young, the T1 project manager.

The renaming of the terminal in honor of Milk has been years in the making. In 2013, gay former supervisor David Campos had proposed naming the entire airport after Milk.

But due to lukewarm support for the idea, Campos worked out a deal with the late mayor Ed Lee to instead name one of the airport's four terminals in honor of Milk. An advisory panel last year selected Terminal 1 as the best choice, leading to city leaders approving the selection earlier this year.

The SFO Museum is working with photographer Daniel Nicoletta, a gay man and close friend of Milk's, on the photomontage display for the Harvey B. Milk Gallery. In its presentation to the arts commission, the airport said it was also looking for photographs from the 1960s through the 1980s that document not only Milk and his political campaigns, but also the city's LGBT community in the 1970s.

As the Bay Area Reporter noted in a story last month, those images will be "exhibited salon style on a wood-paneled wall," according to the airport, in the corner space at the bottom of a bank of escalators that lead to the terminal's Central Inglenook. Most of the main exhibit will be accessible to the non-flying public, though a portion will be housed inside the secure area of the airport.

"It's really exciting to see things coming to fruition," said Alex Walker, a gay man who served on the advisory body that recommended Terminal 1 be named after Milk. "We will have something that will really exhibit Harvey's full life and career."

And the plan to utilize blown-up images of Milk "will grab people's attention as they are running through the airport," added Walker.