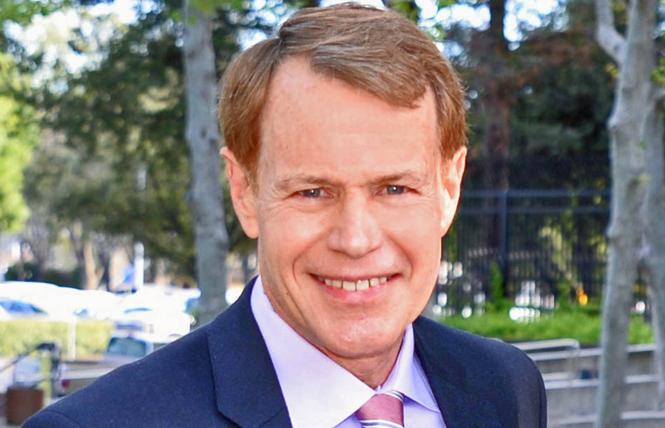 The Santa Clara County Board of Supervisors has authorized funding for several additional staff positions at the county's Office of LGBTQ Affairs, and approved a reorganization that will see it become part of the new Division of Equity and Social Justice.

The changes, pushed by gay Supervisor Ken Yeager, come at the end of his time on the board as he is termed out this year. At a brunch Sunday where the Bay Area Municipal Elections Committee, which Yeager co-founded, presented him with a lifetime achievement award, Yeager noted that the LGBTQ affairs office is the first of its kind in the country.

"I know it will have ripple effects. The office has gone from two to 11 employees in the span of three years because there is so much work for them to do," said Yeager.

Other divisions slated to join the Office of LGBTQ Affairs under the new Division of Equality and Social Justice are Cultural Competency, Immigrant Relations, and Women's Policy. These will all fall under the auspices of gay Deputy County Executive David Campos, a former San Francisco supervisor.

Maribel Martinez, a queer woman of color who is the director of the Office of LGBTQ Affairs, said she is not worried about a diminishing focus or becoming ensnared in a larger web of resource competition.

"The Office of LGBTQ Affairs will continue to devote our efforts and outreach to the LGBTQ community members as we have been doing," she said. "In doing so, we will be able to assist the Offices of Immigrant Relations, Women's Policy and Cultural Competency with LGBTQ-related issues."

Martinez believes that the reorganization of offices under one division will "ensure we are not working in silos but working collectively to create a welcoming environment that is culturally responsive...."

The LGBTQ affairs and immigrant relations offices already share an administrative assistant. Bearing that in mind, Yeager acknowledged concern that the LGBTQ affairs office might be encroached upon by one of the other offices within the new division.

"Since there are so many opportunities for intersectional work between the offices, they collectively decided to form the division to formalize that relationship," he said. "The formal relationship allows them to better pool resources and create efficiencies where they overlap."

Yeager pointed out that four new staff positions where created expressly for the Office of LGBTQ Affairs.

"The need for these positions comes from the work current staff has been asked to do but unable to fully tackle," he said.

The Board of Supervisors has allocated $4.3 million in order to continue funding Santa Clara County's commitment to fairness, as represented by the new Division of Equality and Social Justice.

The LGBTQ affairs office is already working on developing an LGBTQ homeless shelter, expected to open this winter, and a transgender health clinic. In addition the office would like to orchestrate sensitivity and cultural competency trainings for those who serve the LGBTQ community, Martinez said.

"He has done an amazing job during his 12-year tenure," Martinez said. "Even before becoming a county supervisor he was at the forefront of being an advocate for LGBTQ issues. Because of him the rainbow and transgender flag fly every weekday at the County Government Center at 70 West Hedding."

Before being elected a supervisor, Yeager served on the San Jose City Council and the San Jose-Evergreen Community College District.

The sentiment of a lasting exemplar of his LGBTQ work isn't lost on Yeager.

"The office has, and will continue to, ensure that the needs of the LGBTQ community are understood and met long after I'm gone," he said. "I believe our administration has gone above and beyond to embrace our diverse county."

Yeager envisages a sense of vigilance as something that is always needed within the LGBTQ community, especially concerning youth and people of color. However, he said, "I am confident that the work of these individuals and programs will continue to lead the way, addressing the many disparities that the LGBTQ and other marginalized communities continue to face."

More prosaically, he emphasized, "The work doesn't end when I leave office. It'll be around for a long time."