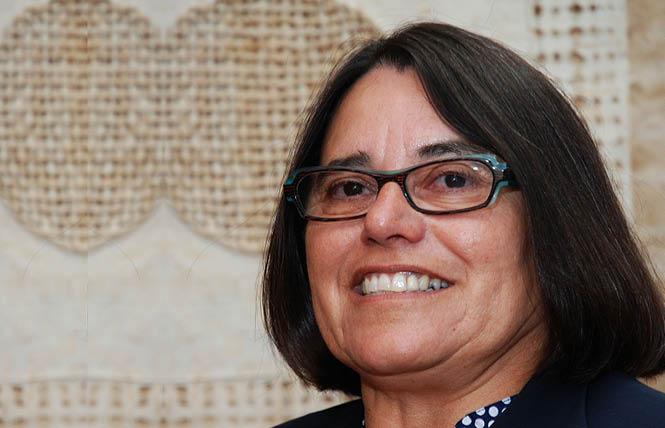 Barbara Garcia, a lesbian who oversaw San Francisco's Department of Public Health the past eight years, has resigned. It is the second resignation by a major department head in the city since Mayor London Breed was sworn into office in July.

According to a letter obtained by the San Francisco Examiner, Garcia informed staff of the city agency of her decision Wednesday morning. In it she said that Greg Wagner, the department's chief financial officer, would serve as acting director until her replacement is named.

"I have had the great privilege of leading, along with all of you, the best Health Department in the country. Together, with our Health Commission, we have worked to protect and to promote the health of all people in San Francisco," wrote Garcia in the letter. "As you know, there is still so much work to do, especially in our communities of color. I am confident of your commitment to continue to raise the health status of all people in San Francisco."

Garcia noted that she supports Breed's "focus on the health and welfare of all communities in San Francisco. I know that all of you will continue to support her efforts."

Garcia could not be immediately reached for comment. The mayor's office told the San Francisco Chronicle in a statement Wednesday that she had resigned for "personal reasons" and the search for her replacement would "begin immediately."

"She is a committed public servant who has worked tirelessly to ensure that all San Franciscans, especially our underserved communities, have the access to public health they deserve," according to the statement from the mayor's office to the newspaper.

Gay state Senator Scott Wiener (D-San Francisco), who has worked closely with Garcia since first being elected to the city's Board of Supervisors in 2010, told the Bay Area Reporter he is "heartbroken" that Garcia is leaving the Department of Public Health.

"Barbara has been a tremendous leader for the department and for progressive public health efforts in San Francisco," Wiener wrote in a text message. "I've had the good fortune to work with Barbara to expand transgender access to health care, to move toward safe injection sites in our city, to expand PrEP access, and to ensure that everyone living in our city has access to healthcare. I wish Barbara only the best in her future endeavors."

Gay BART board member Bevan Dufty, who had been working with Garcia to address drug use and other issues at the transit agency's Civic Center station, mere blocks from her office, praised her leadership of the health department in a statement to the B.A.R.

"Barbara was a very impressive manager who kept a strong hand on a $2 billion department while leading the country's most innovative and fearless public health department. Her rich history as an advocate and change maker always informed DPH's policies and initiatives,' stated Dufty, who had previously worked with Garcia when he served as the District 8 supervisor and later as the city's homeless czar.

Health Commission President Dr. Edward Chow, praised Garcia in a statement he released on behalf of the members of the oversight body.

"During her tenure, Barbara has done much for the health of our city, including completing the rebuilding of Zuckerberg San Francisco General Hospital and Trauma Center, inaugurating the San Francisco Health Network, and achieving Public Health Accreditation status for the department," stated Chow. "Her focus has always been patient-centered, as she worked to make health care services accessible to all, especially for the underserved."

Chow added that "the city has been benefited from her service, and we wish her well in her future endeavors. As per the City Charter, the commission will be working with the mayor's office to fill this gap and continue the work of Department of Public Health on behalf of all our residents."

Former mayor Gavin Newsom had named Garcia director of the health department in October 2010. She had been a deputy public health director since 1999 and previously had served as the city's director of homeless services, launching the Homeless Connect program that encouraged those living on the streets to access local services.

Before moving to the city Garcia had served as the associate AIDS administrator for the U.S. Substance Abuse and Mental Health Services Administration in Washington, D.C.

During her time as director of the city's health department, Garcia worked with community advocates on implementation of the city's "Getting to Zero" plan ending the local transmission of HIV. She also was supportive of the use of PrEP, the once-a-day pill that protects HIV-negative people from contracting the virus.

Those policies and others led to a dramatic decline in new HIV cases in San Francisco. Figures released last fall showed that new HIV diagnoses fell in the city by 16 percent between 2015 and 2016, and have declined by 49 percent since 2012. In May, officials said the number of new HIV infections for 2017 was 223.

At the same time the city has seen a more than decade-long increase in cases of sexually transmitted diseases such as gonorrhea and syphilis. Some of that rise has been tied to gay and bisexual men decreasing their use of condoms during sex for various reasons, from pursuing sexual partners with the same HIV status to taking PrEP, neither of which protects against the transmission of STDs.

One strategy that Garcia was slow to fully embrace was the opening of safe injection sites where intravenous drug users could shoot up under the supervision of medical workers and be connected to harm reduction programs and other services. In 2016 she had told the B.A.R. that she did not oppose safe injection sites but that it was a matter "about prioritization" of the Department of Public Health's budget and what other programs would be cut in order to fund such a proposal.

The late mayor Ed Lee repeatedly expressed doubts about the efficacy of the facilities and said he would follow the advice of local health officials, in particular, Garcia. In December 2016 she came out in full support of seeing the city open a safe injection site.

This week state leaders sent legislation to Governor Jerry Brown that would allow San Francisco to pilot such a facility. Breed has been a vocal supporter for doing so and plans to open a model site later this month, as it remains unclear if federal officials will allow the city to operate a safe injection site.

Joe Hollendoner, CEO of the San Francisco AIDS Foundation CEO, told the B.A.R. Garcia would be missed. In a statement, he added that the nonprofit is committed to continuing to work with Breed and health department in carrying forward Garcia's "vision of making San Francisco the healthiest city in the world."

"I am extremely grateful for Director Garcia's service to San Francisco and her steadfast support for evidence-based public health," stated Hollendoner. "Under her leadership, San Francisco made historic strides responding to the HIV epidemic. While the need for further progress exists, we would not be where we are without Barbara's contributions.