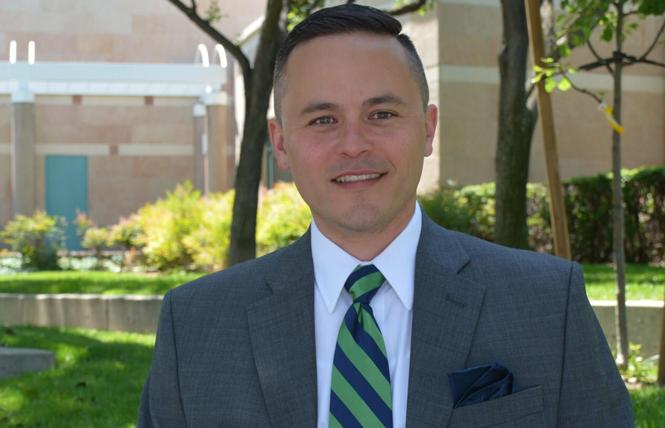 Mounting their first bids for public office this fall, gay men in Dublin and Redwood City are aiming to become the first out elected members of their city councils.

Jason Galisatus, 24, is seeking a council seat in Redwood City, where he grew up. A co-founder and former president of the Peninsula Stonewall Democrats, Galisatus believes he would be the first out city council person elected in San Mateo County.

"I feel like Redwood City needs a leader who can honor our city's rich history and legacy while planning effectively for our future," said Galisatus, a community relations associate at his alma mater, Stanford University.

Running in Dublin is United States Navy veteran Shawn Kumagai. The 41-year-old is an instructional design consultant at Mosaic working on a project for PG&E and is a master chief petty officer in the Navy Reserve.

He launched his council bid late last month and already picked up an early endorsement from the Lambda Democratic Club of Contra Costa County, which he co-founded and served on its board. It is believed that Kumagai would be the first out LGBT person elected to a city council seat in the Tri-Valley area of the East Bay.

"A lot of Dubliners are concerned with the pace of growth and lack of infrastructure and diversity in the types of projects getting approved," said Kumagai, who has lived in the Alameda County city for two and a half years. "I want to make sure Dublin becomes a community that we want 10 to 20 years from now."

Kumagai spent his early childhood living in the Bay Area until his parents divorced when he was 10 years old. He moved with his mother to Phoenix, who was part of a military family. She served in the Army nurse corps, her brother served in the Air Force, and their father enlisted toward the end of World War II.

After college Kumagai enlisted with the Navy and was stationed in California, then Japan. His father is Japanese and came to the U.S. as a teenager for school. Now a permanent resident, he lives in Arizona.

Kumagai's mother had returned to the Bay Area to care for her ailing father. Three years ago she passed away, and her adopted son, Kevin, 16, from her second marriage came to live with Kumagai in Georgia, where he was on involuntary mobilization deployment.

He ended up adopting his sibling and moved back to the Bay Area to enroll him in high school.

"It was a big motivation for me to come back and find a community-oriented place with good schools, and that was Dublin," said Kumagai.

He rented for a year before buying a home, noting in an interview that he "was barely able to squeak in to the market."

Having put down roots in the city, Kumagai said he now wants to use the leadership skills he learned during his military service to give back to the community. Two of the council's four seats are up this year, and no matter if both incumbents decide to seek re-election, Kumagai intends to remain in the race, which is run citywide. The filing deadline is Friday, August 10.

"Dublin is facing unique challenges and opportunities, to be honest like every city in the Bay Area now. It has shifting economics and demographics," said Kumagai, who is engaged to Alex Rafael and plans to set a date for their wedding sometime after the election.

One of his main campaign platforms is to create a walkable city center for Dublin that can serve as a downtown area with stores and restaurants connected to one of the city's BART stations.

"We really need walkable streets facing small retail and small commercial spaces so that we have a city center feel in Dublin. We don't have that," he said. "Where do Dubliners go? They go to Livermore, Pleasanton, or Danville. They bring their tax dollars out of Dublin because we don't have that kind of experience."

Having served under the military's homophobic "Don't Ask, Don't Tell" policy, despite being out to family and friends, Kumagai said he has never felt held back due to his sexual orientation. Now running as an out candidate for elected office, he doesn't think it will be an issue with voters.

To learn more about his campaign, visit https://www.shawnkumagai.com/. 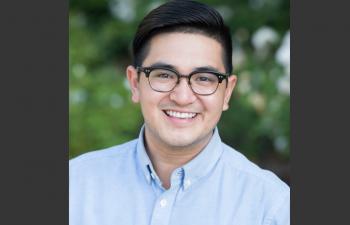 Three of the council's seven seats are on this November's ballot. Two will be open, as the incumbents opted not to seek re-election. Candidates run citywide in Redwood City, and the race is expected to draw a wide field.

"Our city has undergone a lot of change in recent years. I believe the job of the city council is to proactively address the challenges associated with that change," Galisatus told the Bay Area Reporter in explaining why he decided to enter the race.

Despite his youth, Galisatus already has built up an impressive resume in terms of his civic engagement. He was an inaugural co-chair of the San Mateo County LGBTQ Commission, which he pushed county leaders to form, and currently serves as vice chair of his hometown's Complete Streets Advisory Committee, tasked with ensuring Redwood City's road network is safe for pedestrians and bicyclists in addition to personal vehicles and transit.

In high school, Galisatus founded and led the Bay Area Youth Summit, which advocated for LGBT students. Twice he was named the best LGBT youth activist, in 2013 and 2014, in the B.A.R.'s annual Besties awards.

He doesn't believe his youth will be an issue with voters.

"There have been young people elected to office before," Galisatus noted. "Voters care about if someone has a good head on their shoulders and comes to the table with smart ideas and is able to do the job."

Following college Galisatus briefly lived in San Francisco but returned to his hometown in 2016. He recently moved in with his partner of nearly a year, Chris Sturken, who also grew up on the Peninsula and works in community outreach at the Committee for Green Foothills.

"If I am elected, I would be the only renter on the city council, which I feel is a much needed perspective," said Galisatus, who has two younger sisters and whose parents still reside in Redwood City.

To learn more about his campaign, visit http://jason4rwc.com/.