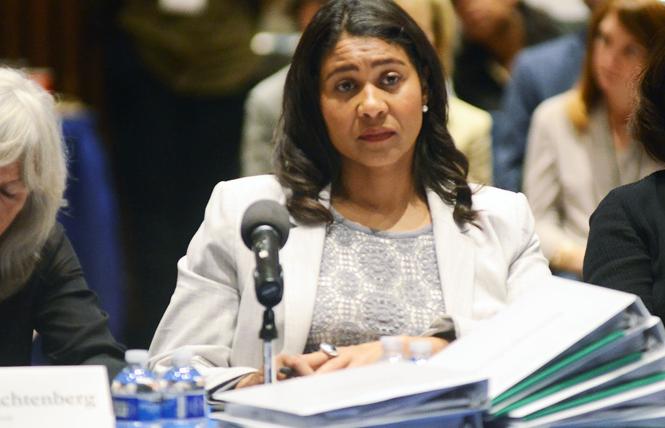 Amid a stack of binders, Mayor London Breed listens to recommendations from her policy transition committees during a summit Saturday at UC Hastings College of the Law. Photo: Rick Gerharter

San Francisco Mayor London Breed spent most of Saturday afternoon listening to members of her policy transition committees present their findings, and ended up with a stack of white binders containing recommendations on everything from housing to homelessness to equity to arts and tourism.

"I clearly have more reading to do," Breed said at the conclusion of her two-hour policy summit, held at UC Hastings College of the Law July 14 and attended by about 200 people. "The goal is to understand new ideas. I also think there has to be follow-up, especially housing and housing equity."

The mayor noted a theme that many speakers brought up.

"All these issues are connected," she said.

For example, Debra Walker, an artist and lesbian who co-chaired the arts and tourism committee, pointed out tourism is an economic engine for the city.

"Tourism, including the arts, generates $9.1 billion a year and 81,000 jobs," Walker told the mayor. "It's really important that we support tourism and art."

According to the committee's executive summary, last year the city's hotel tax brought in over $370 million. Annual payroll in the tourism industry exceeds $2.5 billion, which increases the tax contribution to over $700 million annually.

"Beyond economic impact, we know that arts and culture, cultural tourism, and national and international convenings play a leading role in shaping a culture for our city that embraces inclusion, diversity, and creativity," the summary stated.

Walker pointed out the revenue produced in that sector can "help connect homeless people to services more effectively, help fund police foot patrols, and many other services."

Much time was spent discussing housing and homelessness. Suggestions included having Navigation Centers in every district, which will likely be a tough sell in the western half of the city, and neighborhoods such as the Castro. Other ideas were partnering with private companies, something the mayor endorsed.

The housing committee's executive summary stated that a consistent supply of housing must be provided at all income levels, especially affordable housing.

The committee also recommended fully funding Proposition F, the right to counsel measure for residential tenants facing eviction, by June 2019, as the initiative stated, and implementing a program to protect single-room occupancy affordability to keep people who have no other choice in housing.

Roberta Achtenberg, a lesbian who's co-chair of the housing committee and a former supervisor, told the Bay Area Reporter she thought the summit was "inspiring."

"I think London's idea of bringing us all together and having a discussion and sharing was really inspired. Many of the committees want to keep meeting," said Achtenberg, who now sits on the board of the Bank of San Francisco.

She, too, said there needed to be more creative financing options for housing.

"To produce 5,000 units of housing a year, we're going to have to get creative fast," she said.

Breed was looking for consensus.

"How can we get everyone on board to support one thing?" Breed asked. "I want to go to the private sector ... to support more [housing] subsidies and clean streets."

Mark Dunlop, a gay man who was on the housing committee, is on the board of the Treasure Island Development Authority. Speaking to the B.A.R. after the summit, he said he was excited "to see action and movement."

"We have land, but there's still a gap," he said of TIDA, adding he's hopeful the percentage of affordable units on the island can be increased to 30 percent, up from 25.

The health committee was represented by Diane Jones, a former nurse. Her partner, former health commissioner Roma Guy, provided a copy of the committee's executive summary.

"It's related to challenges and what the mayor says she wants to do," Guy told the B.A.R.

Among the recommendations are to establish a city priority for same-day diagnoses, medication, treatment, and follow-up, and to assert constantly that HIV is a disease, mental illnesses are diseases, and substance abuse disorder is an addictive disease.

The committee also wants to implement safe injection sites - something Breed supports - to reduce the transmission of HIV and hepatitis C, reduce discarded needles on the streets, and refer people to detox and other health care services.

Jones pointed out that the city has regularly backfilled federal funding cuts for HIV/AIDS.

"That needs to continue; if not we will lose ground," she explained.

Jones also said that the city's Getting to Zero initiative to reduce HIV transmission to nearly zero by 2020 is key, but that housing is a major component to its success.

"We're not getting to zero on HIV without housing," she said.

Miguel Bustos, a gay man, co-presented the equity and equality committee's report. The group recommended greater communication and collaboration between city departments with the goal of creating a stronger flow of information. And the group suggested that the mayor hold office hours in the supervisorial districts, with the Mayor's Office of Neighborhood Services taking the lead, and that the sessions focus on topics that address equity and equality.

Breed seemed to like that idea, telling the audience that she got her government start in the neighborhood services office.

The committee also recommended expanding the equity fellowship program being launched in the Western Addition with the Office of Economic Workforce Development and the Human Rights Commission to include Latinx, indigenous, Asian and Pacific Islanders, LGBTQs, the formerly incarcerated, and others.