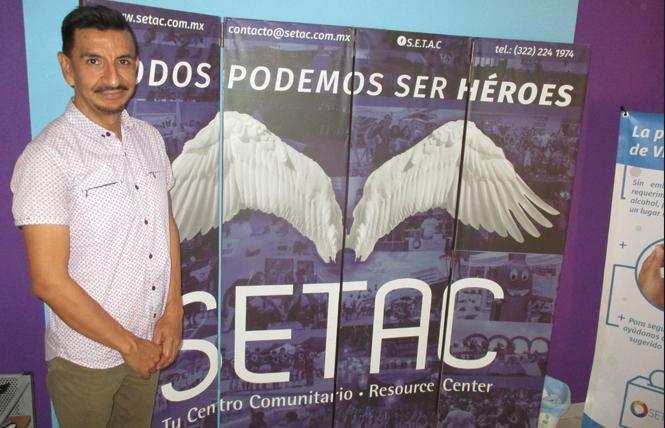 Mexico took a major step aimed at HIV prevention in late June. The country inaugurated a PrEP program in four cities that would make daily dosing of the HIV drug Truvada available free to as many as 3,000 people.

Mexico has a lower overall HIV rate than the U.S. but that statistic is not reflected in the gay male population of the country. The HIV rate is higher among gay men in Mexico than it is in the U.S., according to United Nations data. The PrEP program is targeted toward people at highest risk for contracting HIV in the country, including gay men and transgender women.

"This is a big thing in Mexico. We are a pilot program for Latin America for this project," said Paco Arjona, who oversees the PrEP program in Puerto Vallarta as director of the LGBT-focused SETAC community center.

The program is funded by the United Nations International Drug Purchase Facility (Unitaid). The U.N. agency has been allotted a grant of more than $26 million to spend on the pilot project that includes Brazil and Peru. It is slated to continue through 2020. Bay Area-based Gilead Sciences is donating the drug. A total of 7,500 people will be enrolled in the project over the three countries. It is expected to save those countries a total of $20 million in HIV treatment costs, according to the Pan American Health Organization.

Arjona told the Bay Area Reporter that the effort to bring the PrEP program to Mexico took a year and a half, hampered by slow-moving Mexican government bureaucracies. The program began last week with client intake interviews and the PrEP sites hope to soon receive the drug. In response to an email query from the B.A.R., Unitaid representative Heather Leigh responded that the drugs are to arrive at the PrEP sites "in the next week or so." Although the program is scheduled to run through 2020, if shown successful, HIV health advocates hope it will continue.

The principal investigator of the PrEP project in Mexico, Hamid Vega, told the Mexican newspaper Reporte Indigo that given Mexico's limited resources, he hopes PrEP could be made available to the highest risk groups in the country beyond 2020.

"We hope that there is already a public discussion, a strong decision on how to do it to be able to make this preventive measure feasible for all those who want it and are at risk of acquiring HIV," he said.

Sites
In addition to Puerto Vallarta, four PrEP sites will be in Mexico City, two administered by government clinics and two by non-governmental nonprofits, Arjona said. Mexico's second largest city, Guadalajara, is also participating in the program. The Yucatan Peninsula city of Merida was recently added as the fourth city to participate in the program. Oaxaca was supposed to get PrEP but the earthquake in February destroyed the facility that was going to administer the program.

Arjona estimates that SETAC will serve 300 clients in its PrEP program in Puerto Vallarta. His nonprofit will employ a full-time doctor. After initial HIV and sexually transmitted disease tests, clients will be given a one-month supply of Truvada, which requires daily dosing. After the first month, clients will be re-tested and then put on a three-month schedule and receive a three-month supply of Truvada.

So far, 110 people have signed up to get PrEP in Puerto Vallarta, Arjona said. He added that about 80 percent of those who signed up for PrEP are Mexican, the rest are from the U.S. and Canada, as well as migrants from Venezuela and Columbia.

Arjona added that one of the unique things about Puerto Vallarta is the large number of residents and visitors in the city who are familiar with PrEP programs in the United States.

"The main thing here in Puerto Vallarta is that people already know about PrEP," he said. "They have more information about PrEP than the other locations."

Arjona added that his office has seen many serodiscordant couples and that, more often than not, it is an HIV-positive American involved with an HIV-negative Mexican. In those cases it is especially important that the HIV-positive partner remain adherent to their treatment, he said. Studies have shown that it is virtually impossible for an HIV-positive person on treatment with an undetectable viral load to pass the disease to an HIV-negative person. It is recommended that all HIV-positive people start medication soon after being diagnosed. HIV medication brings a person to undetectable levels within three months, or within weeks if an Integrase inhibitor drug is used.

Arjona said that there is a concern that PrEP could lead to an increase in STDs. PrEP participants will receive counseling, STD testing, and condoms as part of the free program. The director added that syphilis is a serious problem in Puerto Vallarta, and that SETAC treats about 30 people each month for that STD.

According to a 2016 Mexican government health report, 220,000 people are living with HIV in the country. That represents about .2 percent of the Mexican population, less per capita overall than in the U.S. According to the Centers for Disease Control and Prevention, 1,122,900 adults and adolescents are living with the disease in the United States. That is about .4 percent of the U.S. population.

For a video tour of the SETAC PrEP facility in Puerto Vallarta with director Paco Arjona, visit https://www.youtube.com/watch?v=pdw1YDPicGo&t=18s.