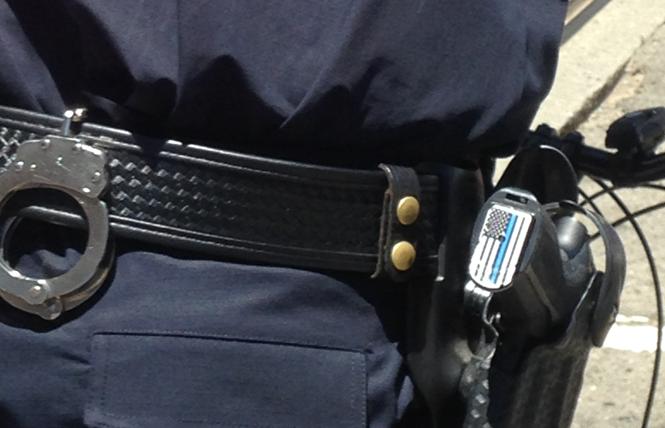 "The enemy soldier in a zone of operations ought not to be allowed to sleep; his outposts ought to be attacked and liquidated systematically. At every moment the impression ought to be created that he is surrounded by a complete circle." - Ernesto "Che" Guevara

In the two weeks since the end of San Francisco Pride, the City has experienced a level of sustained protest and direct action unprecedented since #OccupySF's first actions in 2011. From the activists who surrounded the Federal Building and those who marched to City Hall to those who protested Immigration and Customs Enforcement headquarters in San Francisco, regime installations and policies have been placed under siege as never before.

'SCOTUS Fucked Up'
It began June 26, after the U.S. Supreme Court voted 5-4 to uphold the Trump administration's power to issue a ban on Muslims entering the country who were not U.S. citizens in Trump v. Hawaii. Shortly thereafter, activists from Resistance SF and other groups protested at the West County Detention Facility in Richmond (where ICE keeps some of its detainees) and several hours later, descended upon the Federal Building to protest the decision with banners and a light projection.

Of all the signs I saw that night, it was hard to beat one that was both the simplest and most direct: "SCOTUS Fucked Up," referring to the Supreme Court. While the ruling ends the court fight for the immediate future, activists vowed to continue their fight against the Muslim ban until it is revoked.

Families belong together
That Saturday, June 30, several thousand people marched from Mission Dolores Park to City Hall in the "Families Belong Together" march and rally, sponsored by the group of the same name, to protest the detention and separation of migrants from their family members by the regime.

"This is bullshit, and we've had enough," said activist and former Pride grand marshal Alex U. Inn to a cheering crowd. "This is all about money and racism. This is all about the incarceration of our families and children.

"Every single minute we should be thinking of something we can do to make the fucking change," Inn said.

Sadly, rather than address these justifiable criticisms and concerns voiced by the people the event was supposedly intended to help, organizers appeared to shoo them off the stage so that a Japanese-American group, which was next in the lineup, could voice its "solidarity" with a group it was literally speaking over.

As the saying "Nothing about us without us" - first popularized by disability rights advocates in Europe and elsewhere - goes, those whom the action is supposed to assist should be front and center, not relegated to the sidelines.

#OccupyICESF
On Monday, July 2, anarchists, antifa, Black Bloc, and other activists began their protest outside of ICE's San Francisco headquarters at 444 Washington Street. Multiple dispersal orders by the San Francisco Police Department only strengthened the occupiers' resolve as the encampment grew to cover a city block in the largest direct-action occupation in the city since 2011.

Besides successfully disrupting ICE's efforts to round up local immigrants and refugees, those at the camp conducted multiple letter-writing sessions to immigration detainees as well as teach-ins on immigration policy and activism while keeping a wary eye on efforts by the police to move in.

Early in the morning of Monday, July 9, the SFPD's threats against the occupiers became reality as officers raided the camp and arrested multiple people, at least one of whom was reportedly hospitalized by the police action, according to a statement from #OccupyICESF.

Despite the raid, a previously-planned action at Salesforce Tower later that day to protest the company's contract with U.S. Customs and Border Protection went forward. The occupiers deserve a lot of credit for taking what many see as the immigration Gestapo in San Francisco offline for a week.

Trump and Pence Must Go
Last Saturday, July 7, Refuse Fascism conducted a rally at the Federal Building to demand the removal of the regime, followed by a march to the #OccupyICESF encampment in solidarity with the protesters.

"It means dismantling the apparatus of this capitalist imperialist system," Johnson said. "I'm out here because I believe it's possible, not because I'm an optimist."

As I saw while marching with the group, reminders of the system Johnson spoke of were close enough to touch, given how one of the SFPD bike officers shadowing the march had a "Blue Lives Matter" flag sticker clearly visible on the magazine of his gun.

The flag, which was intended as a direct response by police to the work of Black Lives Matter, has become a favored symbol of fascists as well as members of law enforcement - which, given the existence of fascist groups like the Oathkeepers that are made up of cops - should surprise no one.

I can't say what was in this officer's head when he decided to publicly brandish what many consider to be a hate symbol on his department-issued firearm. However, content concerns aside, the fact that doing so also appears to violate a 2014 directive from then-Police Chief Greg Suhr banning all non-SFPD stickers on guns reinforced a conclusion I and others reached long ago: all cops are bastards.

SFPD spokespeople did not return a request for comment by press time.