News Briefs: ONE to offer encore streaming of 'The Normal Heart' 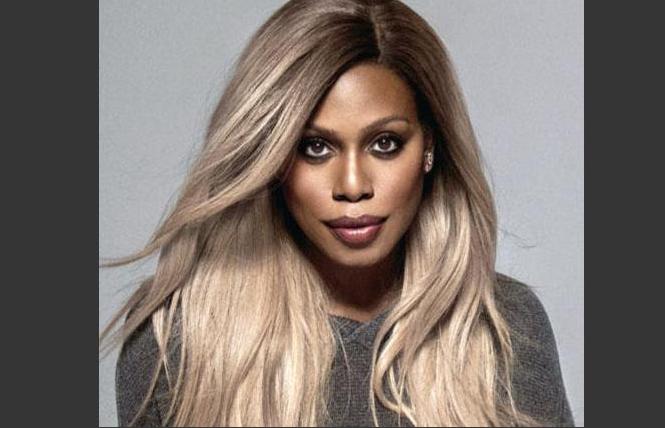 Laverne Cox is one of the stars in the virtual reading of "The Normal Heart." Photo: Courtesy Laverne Cox

In observance of World AIDS Day, the ONE Archives Foundation, in collaboration with the Invisible Histories Project, will present an encore and final presentation of the virtual reading of Larry Kramer's Tony Award-winning play "The Normal Heart." It will take place Saturday, December 4, at noon and 5 p.m. (Pacific Time). A new question and answer session will follow, according to a news release.

This presentation of the play was first done in May to high acclaim, reaching audiences nationwide and in 19 countries across the globe, the release stated. The reading marked the first time that the play featured a cast that is predominantly BIPOC and LGBTQ.

"This presentation of 'The Normal Heart' and its extraordinarily talented, diverse cast made an incredible impact earlier this year," stated director Paris Barclay. "We all felt it was important to re-stream the historic reading to bring more awareness not just to World AIDS Day, but to the message of Larry Kramer's landmark play — which feels even more relevant today."

Tickets range from $20 to $100 and proceeds will benefit ONE Archives' LGBTQ initiatives, the release stated. Student tickets are available for $10 for the noon performance only. Tickets can be purchased here.

Santa Second Saturday in SOMA
When the Leather & LGBTQ Cultural District ended its popular Second Saturdays earlier this year, officials said they had plans for activities during the winter months and that time has come. The inaugural Santa Second Saturday will be held December 11 from 11 a.m. to 5 p.m. According to a news release, the kink-themed indoor holiday fair — co-sponsored by Folsom Street Events and the SOMA West Community Benefit District — will feature the best of local leather and kink artists, craftspeople, and businesses to kick off the holiday season.

The fair will take place at multiple locations throughout the leather cultural district in San Francisco's South of Market neighborhood. There will be a free hop-on, hop-off shuttle from Fogcutter Tours running continuously between the locations from noon to 6 p.m.

The release stated that people need to bring proof of COVID-19 vaccination and wear masks at all indoor venues, except when actively eating and drinking. 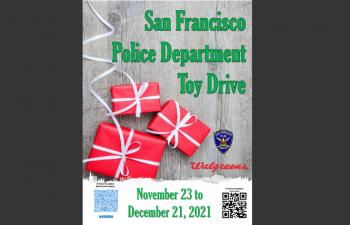 The SFPD is teaming up with Walgreens for its holiday toy drive. Photo: Courtesy SFPD

SFPD, Walgreens toy drive
The San Francisco Police Department is asking for the public's help to bring holiday cheer to children in need with its annual toy drive.

According to a news release, this is the department's sixth year collaborating with Walgreens. SFPD will be accepting donations of new unwrapped toys at over 40 San Francisco Walgreens locations. The toy drive ends December 21.

Individuals can purchase or drop off a new toy at a Walgreens; the police department will collect the items and distribute them to children. Last year, approximately 2,000 toys were donated through the program. People can also make a donation via Venmo or GoFundMe by scanning the QR code on the event poster and then contributing.

According to an email, 100% of the proceeds go directly to support low-income people living with HIV/AIDS in need of 24-hour nursing and attendant care.

There is a requested $20 donation each for either the mutts or meows calendars. For more information, go to the website and click on "Mutts and Meows" at the top of the page.

Varadkar is the fourth out person in modern history to serve as a head of government, which he did from 2017-2020. He is now deputy head of government. Brown made history in 2016 as the first out LGBTQ person elected governor of any state when she won a special election to serve out the term of former governor John Kitzhaber. She was reelected to a full term in 2018. Due to term limits she cannot seek another term in 2022.

Kehoe was an established LGBTQ and AIDS activist when she was elected to a seat on the San Diego City Council in 1993, becoming the first out elected official in the county. She was then elected to the California Assembly and later, the state Senate. Jenkins is the first out Black transgender woman to win elected office in the U.S. Prior to her election to the City Council, she served as a council staffer for 12 years.

The Victory Institute stated that the four will be inducted during its 30th anniversary gala December 4 in Washington, D.C.

Earlier this year, the institute announced the launch of the hall of fame and inducted 20 former LGBTQ elected officials, appointed officials, and candidates as the founding class. U.S. Senator Tammy Baldwin (D-Wisconsin), a lesbian, was the Lifetime Achievement Inductee.

According to a news release, Davis has been at the forefront of several social justice issues, including the second-wave feminist movement of the 1960s, the anti-war campaign during the Vietnam War, advocating for gay rights, and, most prominently, abolishing the American prison system. She has also been an active member of the Communist Party USA, running as a vice presidential candidate for the party on two occasions. In 1970, she was imprisoned for over a year in connection to an armed takeover of a courtroom before she was finally acquitted of the charges.

"Reconsidering Angela Davis: Reflections on Engagement and Societal Transformations" will look at Davis' legacy and the complicated dynamics of protest. Panelists are Kimberly Nichele Brown, Ph.D., from Virginia Commonwealth University; Kimberly Lamm, Ph.D., from Duke University; Jo-Ann Morgan, who has a doctorate in philosophy and is from Western Illinois University; and Robyn Spencer, Ph.D., from Lehman College of the City University of New York.