News Briefs: Mahogany to be honored at PRC gala 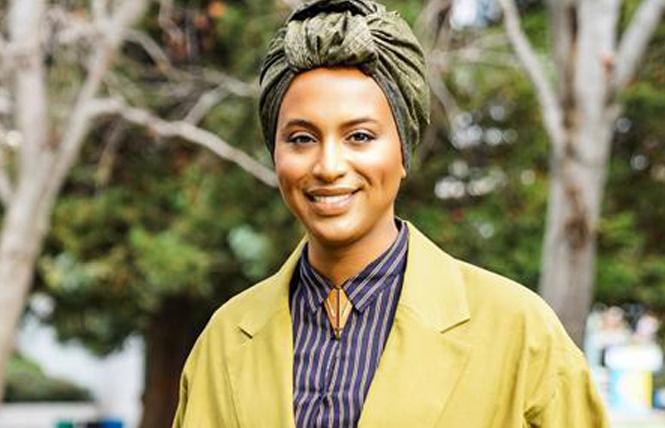 Honey Mahogany, the chair of the San Francisco Democratic Party and an alum of "RuPaul's Drag Race," will be honored at PRC's Mighty Real gala Friday, November 5, in the Veranda Ballroom at the Four Seasons Hotel, 757 Market Street, beginning at 6 p.m.

As the Bay Area Reporter previously reported, Mahogany made history earlier this year when she was elected as the first transgender and first Black chair of the local party. The first trans person in the U.S. to chair a local Democratic Party, Mahogany is now one of the party's highest-ranking transgender officials in the state and country.

Mahogany, who also identifies as queer and nonbinary, is also the first drag queen to lead the local party. Her day job is as a legislative aide to District 6 Supervisor Matt Haney, who is running for the soon-to-be-vacant 17th District state Assembly seat. (The current occupant, David Chiu, D-San Francisco, is expected to resign October 31 to become the first Asian American San Francisco city attorney. Dennis Herrera, the longtime city attorney, is resigning to take over the San Francisco Public Utilities Commission.)

At the gala, Mahogany will receive PRC's Vanguard Leadership Award.

"Honey has brought light into our lives with her beautiful voice, whether she is using it to support important causes or singing on 'RuPaul's Drag Race,'" PRC CEO Brett Andrews stated in a news release. "Her work with those in need across San Francisco has always been unwavering, and we're thrilled to honor her commitment. ... A San Francisco native, Honey is one of us. Her loyalty and passion set an example for all."

Prior to joining Haney's office, Mahogany was a co-founder of the Transgender District and served as its first director, the release noted.

PRC will also recognize others at the event.

The Bare Chest Calendar, which has long benefitted PRC and has raised over $2 million for the agency to date, will receive the Outstanding Community Partner Award. The calendar is now its own independent nonprofit organization. Tito's Handmade Vodka will receive the Outstanding Corporate Partner Award and marks its fifth year sponsoring PRC's varied community events.

Broadway and show business legend Joel Grey will receive the PRC Sylvester Community Pillar Award. Grey, who came out as gay a few years ago, is an Oscar, Tony, and Grammy Award-winning icon who made theatrical and cinematic history as the original master of ceremonies in "Cabaret," both on Broadway and in film. He is also an accomplished director, photographer and a fierce advocate for human rights, a release from PRC states.

As this is an in-person event, COVID-19 safety protocols will be followed per San Francisco city guidelines, the release stated. All guests will need to show proof of vaccination upon entry of the Four Seasons, along with a photo ID. This can be provided in the form of the person's vaccination card or a picture of the card. Attendees will also be required to wear masks indoors except when eating or drinking.

Tickets are $100 for the cocktail hour only, or start at $300 for that, the dinner, and after-party. For more information, go to https://prcsf.org/

DeFrank center offers limited reopening
The Billy DeFrank LGBTQ Community Center has reopened on a limited basis. According to an email sent to supporters, the center, located at 938 The Alameda in San Jose, is open Sundays at 11 a.m. with the Center for Creative Living; Mondays from 4 to 9 p.m. for HIV testing, groups, library, and games; and Wednesdays for vintage lunch at 11 a.m. and rainbow bingo at 7 p.m. (doors open at 6:15). The cost for bingo is $15 for a 10-pack to play.

The center will also hold a Halloween party Sunday, October 31, from 1 to 4 p.m. in the parking lot and inside. Attendees are asked to bring candy to give away.

People will need to show proof of COVID-19 vaccination and wear a mask indoors, the email stated.

Website for grants
A website that allows small businesses, artists, and others to search for grants was recently started by a college student.

Archie Villiers, a sophomore at Sarah Lawrence College in New York, wrote in an email to the B.A.R. that the Grab Grants site is free. New grants are added daily, Villiers wrote, and users can filter them by location and keyword, such as female, LGBTQ+, people of color, and many others.

SF DPH urges people get flu shots
The holidays are fast approaching and the San Francisco Department of Public Health strongly recommends everyone ages 6 months and older get a flu vaccine to safeguard their health. November brings the start of flu season and will again overlap with COVID-19.

According to a news release, last year's flu season was relatively mild, as people significantly reduced contact with each other and masked during the height of the COVID pandemic. While it's unknown how severe this year's flu season will be, the release stated that people are returning to many social activities.

"With increased contact during the holiday season, people could easily spread influenza," the release stated. "San Franciscans can prepare for the combined circulation of flu and COVID-19, which have many of the same symptoms, by vaccinating against both."

Flu shots are widely available across health care systems, pharmacies, and the San Francisco Health Network. Every eligible San Franciscan should be able to access vaccines at free or reduced cost, the release stated. (The same is the case for other Bay Area counties, and people can check with their health care providers or county health department.)

"The flu and COVID-19 vaccines or boosters are readily available at drop-in sites across the city," stated Director of Health Dr. Grant Colfax, a gay man. "They also represent a great opportunity to connect back to your health care provider and address some of your health care needs that were put on hold during the pandemic."