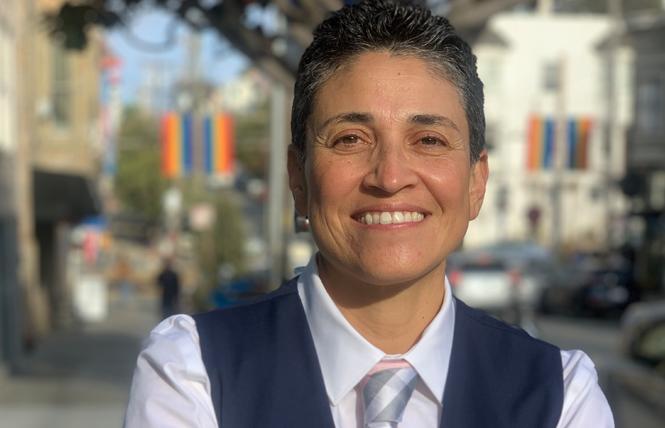 San Francisco's main LGBTQ youth agency has hired a new executive director to lead it as it prepares to undertake a major renovation of its building in the LGBTQ Castro district in early 2022. Laura Lala-Chávez, a nonbinary, first-generation Mexican American, will begin in the role at the Lavender Youth Recreation and Information Center Monday, October 25.

Lala-Chávez, 42, later this month will step down as executive director of Challenge Day, a national organization focused on building empathy, compassion, and equity in school communities across the country. They had previously served as associate executive director of the YMCA in San Francisco.

"I am really humbled and excited about this opportunity," Lala-Chávez told the Bay Area Reporter in a phone interview ahead of the official announcement Thursday, October 7, of their hiring. "I feel like I couldn't have dreamt up a better opportunity. It is exciting."

They grew up on the Mexican side of the Tijuana-San Diego border and attended school on the American side, receiving their U.S. citizenship as a child. In 2003, Lala-Chávez moved to Northern California to attend San Francisco State University, where they received a B.A. in recreation and leisure nonprofit management.

"As soon as you come to the San Francisco Bay Area, you either love it or hate it. I completely loved it," said Lala-Chávez, who also received their master's in school and MFT counseling from SF State.

They held several positions with the San Francisco Unified School District and also worked for two years at Pathways for Success, a youth health center in Daly City. In 2013 Lala-Chávez took a job as associate director of Columbia University's Upward Bound program.

While in New York City they married their wife, Cheryl Lala-Chávez, who identifies as queer. The couple returned to the Bay Area in the fall of 2015 when Lala-Chávez was first hired as the YMCA's senior director of community programs.

The couple lives with their two children, Ava, 6, and Alina Mateo, 3, in San Francisco's Portola district. Lala-Chávez told the B.A.R. they have always been impressed with the work that LYRIC has done to support local LGBTQ youth, especially those from minority communities and those who are gender-nonconforming.

"I have been a fan of LYRIC the entire time I have been in San Francisco and have been working in youth development," said Lala-Chávez, who prefers gender-neutral pronouns but is OK with female ones.

Leading the agency will combine both Lala-Chávez's personal passions and professional interests.

"It serves young people in the city who are a direct reflection of me and my self and my background. This is where I live and I am deeply rooted in San Francisco and I am definitely invested," they said. "Above all my passion is for creating a safe, nurturing community space for queer youth. What better place to do it than in my backyard with an organization I have really admired for a long time?"

One of two final applicants living in the Bay Area that LYRIC's board considered for the executive director position, Lala-Chávez won over the directors with their vision for the agency divided into three main points of "heart, direction, and purpose," board co-chair Michael T. Appel told the B.A.R.

"Within each of those core values, or whatever you want to call them, she outlined a beautiful, important, and impactful vision that will take LYRIC to the next level, which is what we were looking to in the new executive director," said Appel, a gay man in the first year of his two-year term leading the board.

Lala-Chávez's salary will be $160,000; LYRIC's current fiscal year budget is set at roughly $3 million. Their breadth of experience in San Francisco also impressed the board and led to its unanimous decision to hire Lala-Chávez, said LYRIC board co-chair Phil Kim.

"She is so embedded in San Francisco, that really stood out for us," said Kim, a gay man who is finishing his two-year term leading the board of directors.

Appel added, "I think given her incredible experience in San Francisco, her experience leading organizations, fundraising, and working successfully with internal and external stakeholders, she was the full package. We are all so excited. It is one of the most transformational times in LYRIC's history, so it is kind of fitting we are bringing on a new executive director to see all of this through."

Last October, LYRIC had brought on Toni Newman in an interim capacity to helm it following the departure of its longtime executive director, Jodi Schwartz, after 15 years in the position. Schwartz, a queer woman, transitioned to overseeing the capital campaign for the long-planned renovations of the nonprofit's "Purple House" at 127 Collingwood Street.

In late September, Newman, a Black transgender woman, announced she would become interim CEO of the Black AIDS Institute in November. The Los Angeles-based agency has been buffeted by controversy since it let go its previous CEO Raniyah Copeland in late August.

Her abrupt departure led critics of the move to demand BAI's board resign and see Copeland be reinstated. As Poz magazine reported over the summer, Copeland in January had raised allegations of bullying, harassment, and creating a hostile work environment against her supervisor, BAI's board Chair Grazell R. Howard, leading to months of internal strife at the agency.

Newman told the B.A.R. she is "so excited to welcome" Lala-Chávez as LYRIC's new executive director as they are "very qualified to lead LYRIC into the next phase and growth. LYRIC will be in good hands."

Kim praised Newman's leadership of the agency over the last year.

"Toni has been a phenomenal leader and interim executive director for LYRIC," said Kim. "She has been truly just an incredible force as we have been keeping LYRIC moving forward."

Closing in on capital campaign
The nonprofit is closing in on its $2.5 million "Flourish with LYRIC" fundraising goal to cover the cost of the renovations of its building. Initially set for completion this summer, the project will now see a groundbreaking sometime next year.

The plans, approved last fall, call for enclosing a portion of the purple-painted building's driveway by pushing out the ground floor facade to bring it flush with the rest of the building.

In front would be a courtyard area, while the interior will be remodeled and an exterior outdoor area between the main building and a rear-yard structure will also receive a refresh. LYRIC expects to continue providing its services during the course of construction.

The agency has resumed full-time to in-person services, with its building now open from 10 a.m. to 6 p.m. Monday through Friday. Youth 24 years of age and under can drop by to access information on programming and services.

They can also pick up food bags, hygiene kits, safer sex supplies, and connect with staff. Those youth receiving case management with one of LYRIC's youth advocates, however, can only meet there in person by appointment at this time.