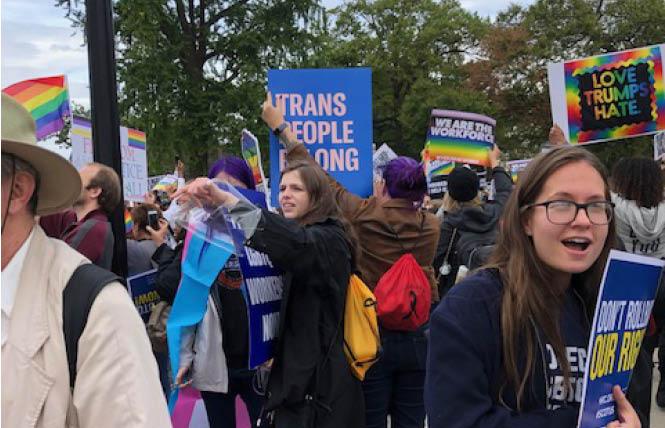 After a historic hearing before the U.S. Supreme Court, LGBT legal advocates voiced optimism that a majority of the justices would rule in favor of LGBT workplace protections.

It was the second day of the court's 2019-20 session, and the two hours of arguments Tuesday, October 8, were split between cases involving discrimination based on sexual orientation and discrimination based on transgender status. But very early on in the discussion around the sexual orientation cases, the justices veered off into territory involving bathrooms and locker rooms and even the court's own dress code.

"The arguments are very similar in both of the cases, and the justices themselves seemed a little confused about which case they were discussing," said Jon Davidson, chief counsel at Freedom for All Americans and former legal director of Lambda Legal Defense and Education Fund.

"They kept asking Pamela Karlan [the attorney representing two employees fired for being gay] about transgender people," he added.

They did it so much that Karlan took the liberty of reminding the justices she was there to argue the sexual orientation issue.

But Justice Sonia Sotomayor pushed back, noting that the "big issue right now raging [in] the country is bathroom usage, same-sex bathroom usage."

Ultimately, over the course of the two hours, the justices seemed to meld the different issues, even though they will eventually address them in two different opinions.

The three cases before the court Tuesday are what most Supreme Court observers consider among "the most watched" cases of the session. Regardless of how the justices decide the cases, the consequences will almost certainly be profound for all LGBT people.

Only one law is at issue: Title VII of the Civil Rights Act of 1964. That section prohibits employers who have more than 15 employees from discriminating "because of sex." The question is how to interpret "sex." Does it encompass discrimination based on one's own sex or also on the sex of one's sexual partner?

But attorneys on the other side of the issue, including Solicitor General Noel Francisco, said it's not. He argued that the employer who fires someone for being gay would do so regardless of whether that employee was a man or a woman. So it's not sex discrimination, it's sexual orientation discrimination. That's different, he said, and that was not on the minds of members of Congress when they passed the Civil Rights Act in 1964.

Justice Ruth Bader Ginsburg prompted Karlan to address that argument, noting that, in 1964, same-sex relations were a "criminal offense," and that the American Psychiatric Association considered being gay a "mental illness."

"This court has recognized again and again forms of sex discrimination that were not in Congress's contemplation in 1964," responded Karlan. "In 1964, those were the days of 'Mad Men.'" She was referring to the popular television series about people in marketing during the 1950s and 1960s, a series that prompted much discussion around sex-based expectations. "Most courts didn't find sexual harassment to be actionable" in 1964, she said, until the Supreme Court eventually ruled that Title VII did include sexual harassment.

The two cases involving sexual orientation Tuesday included one from New York and the 2nd U.S. Circuit Court of Appeals and one from Georgia and the 11th Circuit. Both involved gay men who were fired after acknowledging they were gay. The 2nd Circuit, ruling in Altitude Express v. Zarda, said the employer's firing of parachute instructor Daniel Zarda for acknowledging he was gay did violate Title VII. But the 11th Circuit dismissed Gerald Bostock's lawsuit, Bostock v. Clayton County, saying the court was bound to conform to its ruling in an earlier case, a ruling that Title VII does not cover sexual orientation.

The third case, and the subject of the second hour of argument, is Harris Funeral Homes v. EEOC. It marks the first time the Supreme Court has taken up the issue of whether a transgender person is protected by Title VII.

The Harris case, from Michigan and the 6th Circuit, involves a funeral director, Aimee Stephens, who worked for years identifying as a man because that was the gender assigned to her on her birth certificate. But Stephens sincerely believed, since a young age, that her gender is female. When she got the courage to live true to her gender identity, she told her boss she would begin transitioning to live life as a woman. Her employer fired her. Stephens filed a complaint with the U.S. Equal Employment Opportunity Commission, which ruled that Harris Funeral Homes' action violated Title VII, and the 6th Circuit agreed.

In an opinion piece for the Washington Post October 6, attorney Chase Strangio, who is part of Stephens' American Civil Liberties Union legal team, wrote that the October 8 argument in Harris would be breaking new ground.

"Tuesday may feature the first time the word 'transgender' is spoken during oral arguments in the highest court in the United States. And when the justices look out from the bench and see my co-counsel and me at counsel table," he wrote, "it may be the first time they have looked at transgender attorneys defending our own existence before their powerful bench."

Interestingly, when ACLU attorney David Cole tried to make the court aware that transgender attorneys were in the courtroom, there was some resistance.

"I say that recognizing that transgender people have a right to exist in the workplace and not be turned away because of who they are does not end [with] dress codes or restrooms," said Cole. "There are transgender lawyers in this courtroom today, and the ..."

"Of course there are," interrupted Justice Neil Gorsuch gruffly. "That's not the question, Mr. Cole."

Gorsuch was trying to get Cole to address a specific concern, one voiced by a dissenting judge in the appeals court, that covering transgender status under Title VII would cause a "drastic change in this country," covering things such as bathrooms and dress codes.

"Nobody is questioning ... the legitimacy of the claims [made by the employee] and the importance of them," said Gorsuch. "The question is about judicial interpretation."

"I agree with that," said Gorsuch. "The question is ... when a case is really close, really close, on the textual evidence, and assume for the moment I'm with you on the textual evidence — it's close, OK? ... At the end of the day, should [the court] take into consideration the massive social upheaval that would be entailed in such a decision and the possibility that Congress didn't think about it and that that is more appropriately a legislative rather than a judicial function?"

Cole said courts have already been venturing into these waters.

"Federal courts of appeals have been recognizing that discrimination against transgender people is sex discrimination for 20 years," he said. "There's been no upheaval.

"As I was saying, there are transgender male lawyers in this courtroom following the [Supreme Court's] male dress code and going to the men's room. And the court's dress code and sex-segregated restrooms have not fallen. So the notion that this is going to be a huge upheaval," said Cole, "we haven't seen that upheaval for 20 years."

Optimism
Davidson said he found the exchange between Gorsuch and Cole reason for optimism.

"Gorsuch, who could also be the deciding vote here, seemed to say the employees had the better sense of the literal argument — is this because of sex," said Davidson. And Gorsuch's concern about "massive social upheaval" has a "very easy answer."

"If Congress doesn't like how the court resolves this, Congress can always amend the statute," said Davidson.

"To the extent all these concerns were raised about the bathrooms and the locker rooms and women's sports and dress codes," said Davidson, "Congress could always amend the statute ... and say what they think the rules should be about each of those things, and about religious exemptions.

"So the only question here is, 'Is it discrimination because of sex to fire someone because they are lesbian, gay, bisexual, or transgender?'" said Davidson. "We seemed to have a majority that agreed that it is, but some of them were troubled about what that would mean."

It typically takes several months for the Supreme Court to issue an opinion, once a case is argued. Even more typically, with LGBT-related matters, the court tends to issue its opinions in late June.

Only 20 states and the District of Columbia prohibit discrimination in employment based on sexual orientation and gender identity. Legislation has been pending in Congress for more than four decades, attempting to establish protections nationwide; but the legislation — which has taken on different forms — has not cleared Congress. The House of Representatives passed the latest iteration, the Equality Act, in May, but the Senate has not voted on it.