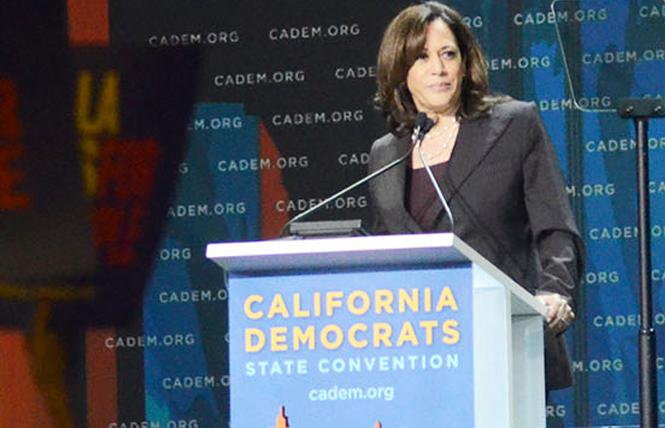 This week, Senator Kamala Harris (D-California) and House Judiciary Chairman Jerrold Nadler (D-New York) introduced comprehensive marijuana reform legislation that is long past due. The Marijuana Opportunity Reinvestment and Expungement Act, or MORE, would decriminalize cannabis at the federal level by removing it from the Controlled Substance Act, where it is listed as a Schedule I drug. Significantly, it applies retroactively to prior and pending convictions, and enables states to set their own policy for criminal justice statutes — it's just one of the bill's provisions and something that we've been clamoring for for years. Federal decriminalization would allow universities and other researchers to study cannabis, which is extremely limited right now.

The MORE Act would also require federal courts to expunge prior convictions, allow prior offenders to request expungement, and require courts, on motion, to conduct re-sentencing hearings for those still under supervision.

The bill would also generate revenue by assessing a 5% sales tax on marijuana and marijuana products. This money would create an Opportunity Trust Fund to provide grants to those who were most affected by the failed war on drugs to pursue job training, re-entry services, and legal aid; loans to assist small businesses in the marijuana industry; and programs that minimize barriers to marijuana licensing and employment.

Congresswoman Barbara Lee (D-Oakland) is one of 30 co-sponsors. As House Cannabis Caucus co-chair, Lee has fought for decades to reform the country's outdated federal cannabis policy, she stated in a news release. She and Congressman Earl Blumenauer (D-Oregon) have introduced several pieces of legislation on the topic, many of which are included in the Harris-Nadler bill.

The introduction of the MORE Act also signals that cannabis reform is sure to be an issue in the 2020 presidential contest. Harris is a leading Democratic contender, and others have signed on as co-sponsors (as of Wednesday they were New Jersey Senator Cory Booker, Hawaii Congresswoman Tulsi Gabbard, and Bay Area Congressman Eric Swalwell (D-Dublin), who recently dropped out of the presidential race). While there are no Republicans who support the bill yet, we hope that some of them see the importance of this issue.

Harris' stance on cannabis has changed since her days as San Francisco district attorney, when her office pursued marijuana convictions. Earlier this year, Harris acknowledged on The Breakfast Club radio show that she has smoked pot in her college days.

"Times have changed — marijuana should not be a crime," she stated in a news release. "We need to start regulating marijuana, and expunge marijuana convictions from the records of millions of Americans so they can get on with their lives."

Since the medical marijuana movement started seeing success in the mid-1990s, cannabis has become legal in more jurisdictions — both for medicinal and recreational uses. As of June, according to DISA Global Solutions, which tracks cannabis laws and provides information on drug testing, marijuana is legal in some form in 40 states, including a reduction of criminal statutes. Now that more states are legalizing cannabis for adult use, reforming laws at the federal level is the next logical step.

One component unaddressed in the Harris-Nadler reform package is the lack of banking opportunities for marijuana dispensaries. Banks won't work with marijuana firms, even if they are in states where cannabis is legal, because financial institutions won't risk being accused of money-laundering by the federal government. This lack of bank access likely will be a stumbling block to many of the reforms Harris and Nadler are proposing. The American Bankers Association, while taking no position on the moral issues raised by marijuana, nonetheless advocates for federal reform. "ABA believes the time has come for Congress and the regulatory agencies to provide greater legal clarity to banks operating in states where marijuana has been legalized for medical or adult use," the trade group states on its website. "Those banks, including institutions that have no interest in directly banking marijuana-related businesses, face rising legal and regulatory risks as the marijuana industry grows." According to the ABA, there are proposals currently before Congress and the Senate that "seek to provide greater clarity and bridge the gap between state and federal law [to] provide a solid starting point for discussion." MORE Act proponents should examine whether to incorporate these related bills into the legislation.

The Harris-Nadler package is intended to reverse the damage done by cannabis prosecutions that resulted in mass incarceration, which disproportionately affects people of color, enabling them to obtain access to education, employment, and housing. Removing cannabis from Schedule I would be the beginning of banking changes to allow marijuana-related businesses to thrive. The stigmatization of cannabis as a dangerous narcotic must end.