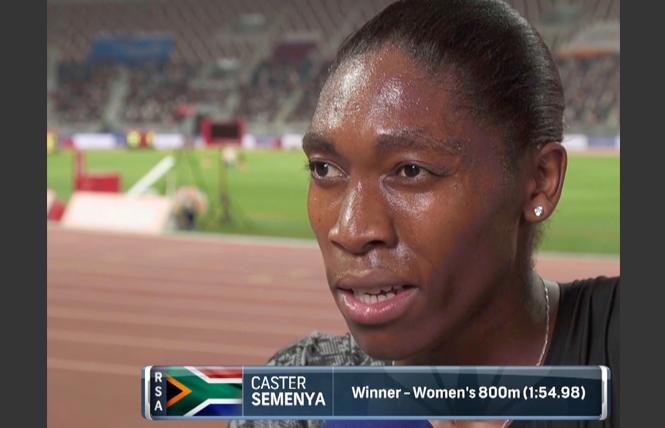 A TV screen capture shows Caster Semenya after a victory at 800 meters over the weekend in Dubai.

Apologists for the new International Association of Athletics Federations rule, which bars Caster Semenya and other women athletes who were born with differences in sexual development, or DSD, if their natural testosterone levels are above average, strike a noble pose, claiming they need to defend the alleged integrity of women's athletics.

They say that although this ruling apparently disproportionately affects non-Caucasian women from the Southern Hemisphere there is nothing inherently racist about it. They admit the exclusionary measure denies opportunity to some women but proclaim it is necessary to defend opportunities for the subset of women it defines under a definition of its own making.

Which might be credible if there weren't so little science to support their stance, no humanitarian or ethical leg for them to stand on, or if the Olympic sport didn't have such an appalling history of sexism. Package the ban as pretty as you like, it remains the same old elitist crap.

This time, it's personal.

The Court of Arbitration for Sport last week denied an appeal by South African Olympic gold medalist Semenya to block a proposed rule by IAAF that bars women with high natural testosterone levels from competing in middle distance races from 400 meters to the mile. Semenya, a lesbian, has won two Olympic gold medals at 800 meters and has succeeded internationally in 400- and 1500-meter races. The rule is the second attempt by IAAF to block women who have DSD, but this one narrowed the events to those routinely contested by Semenya, even though IAAF's own study, which has been widely criticized by other scientists as being badly flawed, showed no link between testosterone levels and performance at those distances. (See May 2 article, "Semenya loses ruling over testosterone." LINK: https://www.ebar.com/news/news/news//275674)

Mixed reactions have roiled social media. Champion Women, for example, praised the ruling for the benefit of all women in sports (without mentioning what it does to the affected women whose opportunities are taken away), used weight categories in wrestling as an example of how sports slot athletes into different categories based on physical differences (without mentioning those groups exist in combat sports for safety reasons), and directed readers of its Facebook page to a pro-ban article, without mentioning it was written by one of the people who supplied support arguments for IAAF.

"Of course, it's one thing for myths to persist in the public imagination," Katrina Karkazis and Rebecca M. Jordan-Young wrote. "But what has puzzled us in nearly a decade of research is how these ideas have gained so much traction among the organizations that regulate sports, when the evidence needed to support them is largely absent or contradictory. The idea that testosterone is the miracle molecule of athleticism, and, accordingly, that people with higher levels would obviously perform better, combines several beliefs: that 'athleticism' is a kind of master trait that describes similar characteristics in different athletes, that 'athletic performance' across different sports generally requires the same core skills or capacities, and that testosterone has a potent effect on all of them. That's simply not true."

In a statement, the Astraea Lesbian Foundation for Justice said, "The recent ruling of the Court of Arbitration for Sport against Semenya is not only a major setback for intersex human rights but reveals how intersex people — especially those who are black and brown — continue to be dehumanized and systematically excluded from all spheres of life, including sports. As often happens, the news about the ruling and the ensuing media coverage revolved around medicine and testosterone levels — not the human at the center of the ruling, her rights, her body, and her life. The ruling not only stigmatizes intersex people, but also fails to recognize the truth of what it means to be a competitive athlete — natural genetic advantages that set you apart to win. Advantages that are celebrated not regulated, be they cardiac capacity, lactic acid levels, etc. The fact that genetic endowment is not regulated in men's sports goes to show that the IAAF ruling is an overt form of gender policing, and not at all an issue of sports justice."

Madeleine Pape is a former 800-meter runner from Australia. When she competed against Semenya in the world championships in 2009, she echoed the voices around her challenging Semenya's right to compete. She told NPR this month that she's changed her view since then. She also noted that track survived very well for years without making a stink about naturally occurring testosterone and that raises questions why now this rule is being introduced and seemingly aimed at Semenya in particular.

"I think it is very fair to be asking why women of color from the global south and from sub-Saharan Africa, in particular, are overrepresented amongst the women who've been accused of having an unfair advantage," Pape said. "When we think about why Semenya, and why have her performances, in particular, raised the ire of a number of people, you have to wonder whether sexuality plays into it. I mean, she's openly a lesbian. She is ... I would describe her as 'nonconforming' in terms of her gender presentation. And I think the sport of track and field, as much as I love this sport — and, you know, it's the No. 1 love in my life — I think we have a little way to go still when it comes to accepting both diverse gender identities, and also abandoning our ideas about heterosexuality."

Tennis great Martina Navratilova, who has been criticized for her stance against trans-inclusive policies in sports, condemned the court's decision, saying, "The verdict against Semenya is dreadfully unfair to her and wrong in principle. She has done nothing wrong and it is awful that she will now have to take drugs to be able to compete. General rules should not be made from exceptional cases, and the question of transgender athletes remains unresolved."

Semenya, who won her 800-meter race in an IAAF competition in Qatar over the weekend, said she would not take the hormone suppressants to compete.

Ever hear of the "Nanny State" concept? Ever heard of chauvinism leading men to be overly protective of women, thinking they need to prevent them from having to deal with boogeymen and dangerous conditions because they are too weak and dainty to handle things on their own? Well, track and field's Olympic history suggest there's a garbage pail of that in this IAAF rule.

You've all probably heard about how women were blocked from running the Olympic marathon because the "experts" said their bodies could not handle the strain. I think we can safely say that's been well exposed as a bunch of crap.

But what about the 800 meters Semenya has dominated in recent years? That was first run in the Summer Olympics in 1928 — and then dropped until the 1960 Olympics. Why? Because bogus newspaper reports falsely claimed most of the women collapsed at or near the finish. Because the so-called experts of the time argued that women weren't built to handle the rigors of the distance. Because Notre Dame's football coach, covering the Amsterdam Olympics for the Pittsburgh Press, told readers, "It was not a very edifying spectacle to see a group of fine girls running themselves into a state of exhaustion."

And those studies that talk about what the testosterone range is for women, the range they say Semenya and Francine Niyonsaba of Burundi and other DSD women (intersex babies occur an estimated once in every 1,500 to 2,000 births) exceed? They determine that by eliminating Semenya et al. from the data on which they base their conclusions.

And by the way, higher than normal testosterone levels occur in men's sports. They don't ban those players or tell them to take birth control pills to bring their levels down. They measure the athlete's individual testosterone baseline and than watch to make sure it is not artificially jacked up later. Any advantage that a naturally high testosterone gives is accepted. Period.

To summarize: the IAAF is knowingly adopting a discriminatory rule and for the first time barring individuals from competition for having naturally occurring high hormone levels; the rule was tailored not to cover the races in which some slight correlation between testosterone levels and performance were found but simply the one in which one of its star athletes competes; the rule seems to disproportionally affect women of color from the Southern Hemisphere — and we're supposed to be fine with that?

"God has decided my career, God will end my career," she told BBC. "No man, or any other human, can stop me from running. How am I going to retire when I'm 28? I still feel young, energetic. I still have 10 years or more in athletics. It doesn't matter how I'm going to do it. What matters is, I'll still be here. I am never going anywhere."