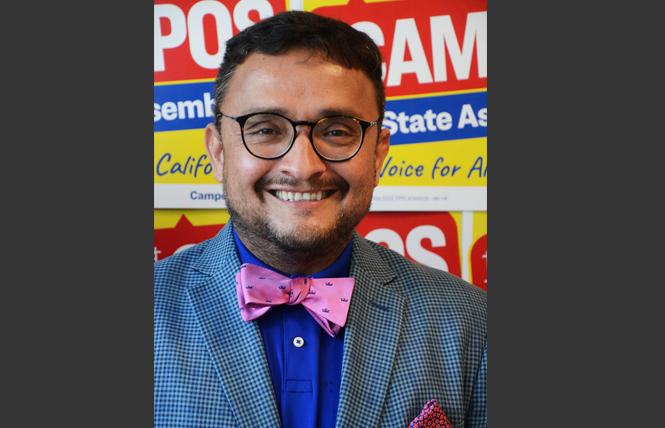 In the special primary election for the 17th District Assembly race in San Francisco, we recommend David Campos, a gay Latino man who has served on the Board of Supervisors and is currently vice chair of the California Democratic Party. Campos would bring back queer representation to the district that roughly covers the eastern side of the city but, more importantly, all of his constituents would get an assemblymember who will fight for them.

Campos and his main opponent, District 6 Supervisor Matt Haney, agree on most of the issues. But during a recent virtual editorial board meeting, Campos made a strong case for his candidacy, and why representation matters. We asked how Campos, if elected, would work with his gay colleague state Senator Scott Wiener (D-San Francisco). The two have not endorsed each other in past races, and Wiener is sitting out the special election as the online Political Notes column reported Monday. Nevertheless, Campos said the working relationship between the two is much better these days. "I think it's something that he hasn't endorsed against me in this race," Campos told us. "On LGBTQ issues, I'm the candidate best positioned to work with him."

During our meeting, Campos was compelling when talking about the importance of queer representation. After leaving the Board of Supervisors due to term limits, Campos worked for several years as a deputy county administrator for San Clara County. That experience gave him a first-hand look at the county's Office of LGBTQ Affairs; in fact it was one of the departments he oversaw. He envisions a similar state office specifically designed to look at the needs of LGBTQ residents throughout California and make sure their needs are addressed, particularly issues like access to health care for transgender people. As supervisor, Campos pushed to make certain health services free for trans people, and the city hired a physician at Zuckerberg San Francisco General Hospital for that position. He enacted city legislation for a program that made PrEP accessible regardless of anyone's ability to pay — the first in the state that took protective action by making PrEP available to stop the transmission of HIV/AIDS. One of the things he found while working in Santa Clara County was that trans people had to travel to San Francisco or elsewhere for their health care. That led him to help open a gender clinic in the South Bay. There should be similar gender clinics throughout the state, he said.

Homelessness is one of the toughest issues facing the state, as well as San Francisco. On Mayor London Breed's recent emergency declaration in the Tenderloin, Campos said he agreed with her that something had to be done. But he does think that the primary focus needs to be on combating drug overdoses and providing mental health services. Just sending in more police won't improve the situation, he cautioned. He was also disappointed that her declaration did not include a safe injection site, though the board did recently approve the purchase of a building in the Tenderloin that could potentially be used for that purpose. Campos does support the linkage center that is a key part of Breed's declaration. He would "flood the Tenderloin with clinicians" to provide services, he said, and that state level agencies should be aiding cities, both in terms of personnel and funding. It's the drug dealing that should be prosecuted, and by that Campos was referring to the larger scale drug dealers, which he said the district attorney's office is doing. (Campos is on leave as the chief of staff for DA Chesa Boudin.)

Campos has long championed Navigation Centers, including the one on the Embarcadero. In fact, the city's first one was in his district when he was on the Board of Supervisors. He passed a law calling for equity in Navigation Center locations throughout the city, including one with a safe injection site back in 2016. But he had to drop the safe consumption site component because then-mayor Ed Lee was not in favor of it. An attorney, Campos thinks the mayor could use the power of the emergency declaration to open a safe consumption site now with a legal justification that could withstand a legal challenge by the federal government. (Federal laws are preventing such a site from opening sooner, though Wiener's state legislation that would establish pilot programs for safe consumption sites in San Francisco, Oakland, and Los Angeles passed out of the state Assembly Health Committee Tuesday. Campos supports that legislation.) On homeless shelters, Campos convened a hearing years ago and heard from LGBTQ people that many preferred to stay on the streets because the city's shelters were homophobic and transphobic. That led to the creation of Jazzie's Place, the first shelter specifically for LGBTQ adults. While temporarily closed due to the COVID-19 pandemic, the shelter's operators have previously told us they hope to reopen this year.

On housing, Campos supports Senate Bills 9 and 10. The latter is Wiener's legislation that allows local governments to upzone parcels for residential housing if they are near transit or an urban infill site. If elected, he said that he would continue to be a champion of affordable housing and transit. He wrote in his questionnaire to us that one thing lacking is more state resources to fund affordable housing and he will propose a statewide bond measure for that purpose. "We need more affordable housing in California, not just luxury housing," he wrote in his questionnaire. "And we need housing that will not contribute to environmental degradation, traffic gridlock, and most importantly, displacement. We need bolder proposals to create affordable housing, requirements that housing is near transit or supported by transit improvements, and most of all, protections against mass displacement of low-income families."

He supports Supervisor Rafael Mandelman's fourplex legislation. He said he was opposed to the Stevenson parking lot redevelopment backed by Haney, but which the supervisors recently rejected, because it did not include enough on-site affordable housing. He also said that environmental issues weren't adequately addressed. The state is now investigating the board's action. "I do believe we need to build more housing," Campos said, and thinks the Stevenson project will get built.

Campos said that he's always looked out and fought for our community. His lived experience was one that is familiar for many immigrants in this country; he was undocumented when he and his family came to the U.S. from Guatemala as a child. Campos has a solid track record of not only championing queer issues like naming the Harvey Milk Terminal 1 at San Francisco International Airport, combating HIV/AIDS, supporting neighborhoods by establishing cultural districts, but also fighting for Medicare for All, which he said would be his top priority in the Legislature and would greatly benefit transgender people. Just this week, the Assembly Health Committee passed AB 1400 to create a single-payer health system known as CalCare, while Governor Gavin Newsom unveiled his proposed $286.4 billion state budget that calls for providing health coverage for all people, regardless of their immigration status.

Campos supports police reform, and stated he would push for legislation to repeal qualified immunity.

We did not recommend Campos the first time he ran for Assembly in 2014. His opponent, David Chiu won, and served until last November when he became San Francisco's first Asian American city attorney. Since that race, we think Campos' experience has deepened and that he will be an effective lawmaker. He has regional experience having served on the Metropolitan Transportation Commission and has been endorsed by six members of the Board of Supervisors. We're endorsing Campos not just because he is gay, although that aspect of him is important, but because he has the experience, qualifications and commitment to progressive solutions for addressing the issues we face. Campos told us that he would be "relentless" in fighting for the LGBTQ community. That's what we need. When vote by mail ballots start arriving in a few days, we recommend voters select Campos for the 17th District Assembly race.

Editorial: Biden still has much to do
Sign up!