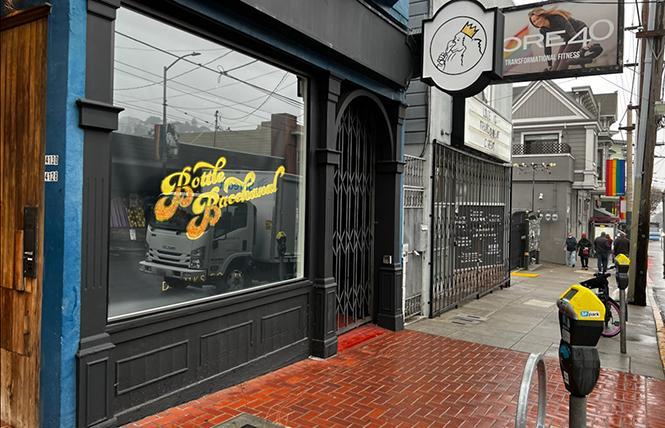 Under a zoning change for bars that the Board of Supervisors approved January 11, more than just wine shops would be allowed to open in the Castro. Photo: Matthew S. Bajko

The San Francisco Board of Supervisors passed legislation January 11 that will allow additional bars in the Castro neighborhood.

The legislation will change bars' zoning status from not being permitted at all to being permitted conditionally in the Castro Street neighborhood commercial district, or NCD. Thus, any new such business would need to seek a conditional use permit from the city's planning commission in order to open its doors, prompting a review process where the public could weigh in on the matter.

It faces a procedural vote at the next regular supervisors' meeting January 25 and, if approved again, the zoning changes will go into effect March 6, according to Jacob Bintliff, a gay aide to Mandelman.

Mandelman stated he hopes that the legislation will lead to a business revival.

"I'm glad my colleagues passed this legislation and hope it opens the door to new operators and concepts in the Castro," Mandelman stated. "The neighborhood has too many vacancies, and we should be making it easier to fill them."

Masood Samereie, a straight ally who is president of the Castro Merchants Association, stated he hopes the legislation will help the Castro emerge from the COVID-19 pandemic.

"We are pleased and grateful for Supervisor Mandelman and his staff for their support in this effort proposed by Castro Merchants to provide opportunity for entrepreneurs and alike to start a new business in the Castro especially now in our attempt to recover from the pandemic," he stated.

As the Bay Area Reporter previously reported, Mandelman introduced the legislation after a prospective wine bar owner, Suzie Jennings, was told she could not open up in the NCD.

Jennings, a lesbian, had wanted the wine bar in the old Unionmade location at 493 Sanchez Street at the corner of 18th Street. However, new bar locations have been barred in the NCD since its inception in 1987, and so Jennings was turned down.

The 493 Sanchez Street location is currently being renovated for use as a Pilates studio by Bright Star Pilates and Gyrotonic Studio, according to workers who said December 21 that they are renovating the floor for that purpose. The studio told the B.A.R. it hopes to be permanently housed in the space. Jennings has not returned messages seeking comment on what her future plans may be.

Before the legislation was voted on by the whole board, it was heard by the Small Business Commission, the Planning Commission, and the supervisors' own Land Use and Transportation Committee. It was approved unanimously by all three bodies.

Bintliff told the latter committee January 10 that Jennings' experience was the genesis of Mandelman's proposed legislation.

Bintliff pointed out to the planning commission last month that "queer folks, trans people, and people of color" are effectively sidelined from opening new establishments under the existing rules.

"The prevailing sentiment, supervisors, is it doesn't seem fair to preclude new folks ... from opening new bars," Bintliff said. "This is especially true in a neighborhood with a high level of retail vacancy."

Bintliff told the Land Use and Transportation Committee that if adopted, the legislation would make the Castro's rules "consistent with how bars are zoned in other neighborhoods of the city."

Bathhouse zoning changes
Bintliff told the B.A.R. that Mandelman plans to soon introduce zoning changes around adult sex venues, which are in a similar situation as bars. Legislation is currently being reviewed by the city attorney's office.

Currently, gay bathhouses are prohibited in much of the city. While Mandelman spearheaded successful legislation last year to allow them in the city again after they'd been closed in 1984 to prevent the spread of the AIDS epidemic, the planning code — which defines them as "adult businesses" — only allows them to open without conditions in the Civic Center area, the Financial District, along most of the waterfront, and in parts of the Mission, Dogpatch, and Bayview neighborhoods. They are permitted conditionally in other areas as well, such as on Market Street from Church Street to Van Ness Avenue.

According to Bintliff and Daniel A. Sider, chief of staff of the planning department, Mandelman's new legislation will seek to divorce bathhouses from adult businesses to form a new category.

"Our proposal all along has been to create an 'Adult Sex Venue' definition in the planning [code] and to allow it in Castro/Upper Market, SOMA, and other areas," Bintliff stated.

Updated, 1/12/22: This article has been updated with comments from the Castro Merchants Association.