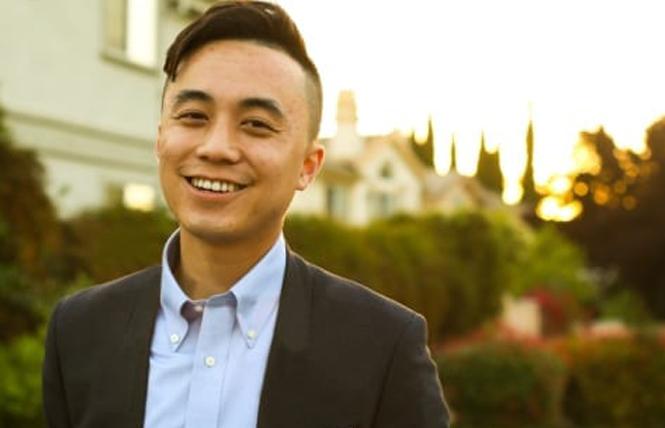 Until this fall the farthest east Assemblymember Alex Lee (D-San Jose) had traveled was South Dakota to see Mount Rushmore with a friend. Then Assembly Speaker Anthony Rendon (D-Los Angeles) tapped him for a legislative delegation to lobby officials in Washington, D.C. at the White House and on Capitol Hill.

During the late September trip Lee, one of the Legislature's most liberal members, caught a glimpse of progressive Congressmember Cori Bush (D-Missouri) and was able to meet another progressive political idol of his, Congressmember Alexandria Ocasio-Cortez (D-New York). Photos he posted to Twitter show the two talking and smiling for the camera.

"It was amazing to see someone I consider a personal inspiration and talk to them. She was really humble and nice," recalled Lee. "I did not expect to be taller than her. In my mind I wasn't taller than her. Certainly a highlight of the trip."

It capped for Lee, who stands at 5 feet, 8 inches, his first year serving as a legislator. Now 26, Lee won election in 2020 as the first out bisexual to serve in the Legislature and as its youngest member since 1938. Gay state Senator John Laird (D-San Jose), at 71 the oldest member of the Legislative LGBTQ Caucus, ribbed Lee for having never seen the sitcom "Designing Women" during the affinity groups' meetings.

"I have a double whammy on this side, as I am not very good at keeping up with popular things like movies and TV shows," said Lee, born two years after the CBS show had ended its run.

Speaking by phone to the Bay Area Reporter about the first half of his freshman two-year term, Lee said it had been both "extremely challenging but rewarding most of the time." It also reinforced for him "why I ran in the first place, to make real tangible changes in people's lives," he added.

Just as his campaign for the open Assembly District 25 seat was thrown a curveball by the COVID-19 pandemic, limiting his ability to interact with voters face-to-face, so too were his first eight months in office. Much of the legislative session, which ended in August, was conducted remotely.

Luckily, Lee to date has not tested positive for the coronavirus. When the legislators did convene in person, they did so with masks on and heard from the public largely via call-in lines rather than physically in the hearing rooms of the Statehouse. The year was "tough," as Lee noted in a recent fundraising appeal email.

"Governing as a state assemblymember for more than half a million people during a global pandemic in 2021 has not been a walk in the park, but it has proved the necessity for government's transformative power of change," wrote Lee, who currently represents parts of Alameda and Santa Clara counties.

Despite having to meet most people virtually in my first year in office, I'm thankful platforms like these have helped me meet and understand so many great people & their visions. I've always been an introvert so knowing you all digitally before meeting irl has been a blessing— Alex Lee ??? (@alex_lee) December 30, 2021

The pandemic recovery measures the state's lawmakers enacted will "set a precedent for years to come," said Lee, of what the government is able to do to assist the public during times of crises. The efforts ranged from direct payments to low-income households to protections for renters and homeowners unable to pay their rents or mortgages.

"We stretched the limit of what government is able to do and changed people's minds and attitudes of that direct assistance, too," said Lee, a former legislative policy adviser. "It is challenging to do that stuff."

New district
When the B.A.R. talked with Lee in early November, the state's redistricting commission had yet to finalize its work, thus he was unable to speak directly about how his Assembly seat was being redrawn. All Lee would say was that his district "would be quite different."

At nearly 54%, it is majority Asian with Caucasians accounting for 24% and Latinos 16% of its 478,426 residents. Lee's family is Cantonese Chinese; his parents emigrated from Hong Kong to the South Bay.

He and his younger brother grew up in the Berryessa district of San Jose and Milpitas, as their parents divorced when they were young and the siblings shuttled between their homes in the two cities.

"No matter what happens, it is out of my control. I am still running for state Assembly. I've got 10 more years to do the stuff I want to do, so I want to use them," Lee said in the fall, referring to legislators having 12 years in office prior to being termed out.

As for the new AD 25 seat, which was drawn to be fully contained within Santa Clara County and sprawls from San Jose's Alum Rock district southeast through Henry Coe State Park to the edge of Pacheco State Park along State Route 152, it is where Assemblymember Ash Kalra (D-San Jose) will be running.

Lee is fending off a challenge from his predecessor in the Assembly seat, Kansen Chu, who opted not to seek reelection in 2020 and went on to lose his bid for a Santa Clara County supervisor seat. Chu has criticized Lee for lacking legislative experience and pushing for extremely liberal policies, such as restricting Ellis Act evictions, only to see them die in committee.

In response, Lee knocked Chu for focusing on ending daylight saving time during his six years in the Assembly as opposed to issues he is championing, like housing and health care for all.
"I can guarantee you that is less impactful on your life than how much your rent is," said Lee of doing away with changing the clocks twice a year. 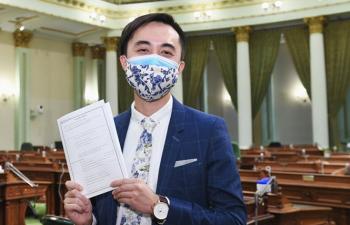 Lee is unrepentant for trying to push his Democratic colleagues to the left and has no qualms about expressing his criticisms publicly via his social media platforms. Lee told the B.A.R. he plans to revive several of his bills that died last year, such as calling for the state to provide single-payer health care and social housing, referring to affordable rental units owned by the state or a nonprofit entity.

He also intends to continue to push for a "clean money" in politics law to require greater transparency in who or what groups are financing campaigns. Lee argues he is legislatively trying to enact policies endorsed by the Democratic Party.

With a number of his legislative colleagues leaving in recent months for other positions or deciding to retire at the end of the legislative session this year, Lee told the B.A.R. he is optimistic of seeing a younger, more progressive class of legislators be elected come November that will be more amenable to his policy goals.

Just this week former San Diego City Councilwoman Georgette Gómez, a queer progressive, launched her bid for the special election that will be held this spring for the current 80th Assembly District seat. Assemblymember Lorena Gonzalez Fletcher (D-San Diego) announced her resignation January 3 after accepting the California Labor Federation, AFL-CIO's offer to be its leader in July.

"I always say most things worth doing are hard, require a lot of organizing, and pushing to gather the momentum to do. If I only did the easy things, I wouldn't be an effective legislator for you," Lee said of his message to his constituents.

Being the lone bisexual state legislator, and one of only a few in elective office in the state, comes with its own challenges for Lee. Despite California's liberal reputation and being in the vanguard of LGBTQ rights, Lee has faced biphobia over the past year.

"Even in office I hear stories or hear people talk behind my back. There is still biphobia and a misunderstanding about that," said Lee, adding that one positive is more people are comfortable identifying as bisexual or pansexual in public. "Bi erasure has led to a lot of things; there are high levels of mental health issues bi people face."

Lee told the B.A.R. he prefers to look at the silver lining of his being an out bi official allows him to explain to people that one's sexual orientation or sexuality is not defined by their sexual partner. Otherwise, he noted, single people would be considered asexual.

"The beauty of the LGBTQ community is more than binaries exist. I am trying to have that conversation," said Lee, who still finds it strange to be told by other bi individuals they are thankful for him being a public role model.

"Honestly, I am surprised by that reaction from people. It shows the lack of representation we have," said Lee, though he acknowledged "there are not a lot of bi folk out there, so it is refreshing for people who struggle with their identity to find someone to maybe model after."