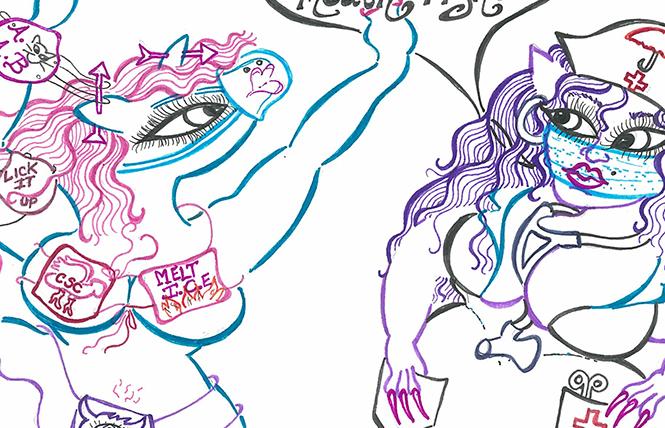 Whimsy and weariness take center stage in the Political Notebook's op-art offering for 2021. The fourth annual submission is by artist Dorian Katz, a queer Oakland resident who curated various shows at the now-closed Center for Sex and Culture.

Katz, 53, is also known for her cartoon character Poppers the Pony. She trotted out the spirited steed 15 years ago under a different name that didn't stick and landed on Poppers in 2008.

"She is my alter ego. I think of her as my better aspirational self. She has been an evolution," explained Katz. "But Poppers I like, it seems a good, jumpy, happy horse name."

It also is the name gay men use for amyl nitrite, an inhalant sniffed during sex. Federal health officials have long warned inhaling or ingesting the chemical can be dangerous and even deadly, though Katz didn't pick the name to make any statement.

"I personally enjoy poppers myself, but I thought it just seems like a good name, like Prancer or something like that — a nice festive name with an added bonus," she said.

In Katz's op-art Poppers has masked her muzzle and is attended to by Naughty Nurse, modeled after Katz's friend Celestina Pearl, a nurse at St. James Infirmary, the San Francisco health clinic for sex workers and others.

"I wanted to do a pandemic theme, as things are reopening more but we still need to mask up and vax it up," explained Katz.

Poppers sports other masks on various parts of her body; one covering her right breast shouts out to the Center for Sex and Culture. Another protecting her crotch pays homage to A.B.O. Comix, a collective amplifying the voices of incarcerated LGBTQ artists.

The second panel introduces two safe-sex superheroes. Bleachman, with a bleach bottle for a head, starred in a San Francisco AIDS Foundation campaign in the late 1980s focused on protecting injection drug users from becoming HIV-positive. Captain Condom, aka Clay Carpenter, was an HIV-positive comics character created by graphic designer Beowulf Thorne and featured in the San Francisco zine Diseased Pariah News throughout the 1990s.

"I am thinking about going out and having fun but doing it safely as much as you can," said Katz, "so it is keeping a sense of humor, I hope. It has been such a heavy couple of years, so I wanted to make something that makes people giggle a little." 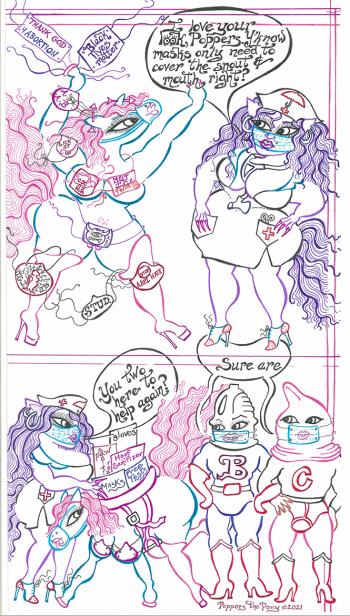 To see more artwork from Katz, visit her Instagram page.