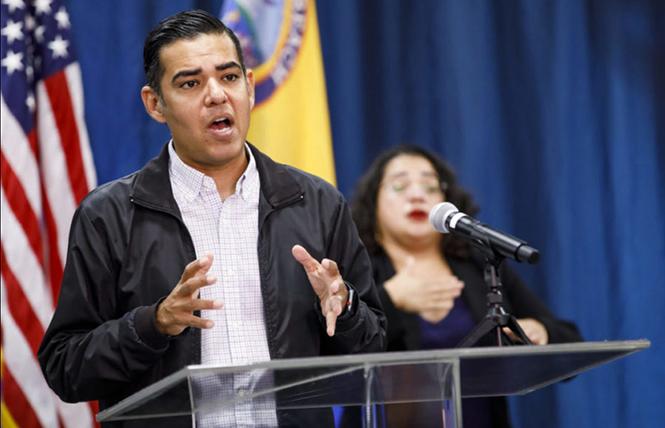 With various other potential candidates backing him, and two influential LGBTQ rights groups endorsing him hours after he made his candidacy official, Long Beach Mayor Robert Garcia is the clear frontrunner to succeed Congressmember Alan Lowenthal (D-Long Beach). Elected leaders from around the state have also lined up behind Garcia's House bid.

Garcia, 44, the first openly gay and first Latino mayor of his city, made his long-speculated run for Congress official December 17, a day after Lowenthal announced he would retire rather than seek reelection next year. As far back as 2011, when the congressional seat was last open, Garcia was said to be interested in it.

This week, Congressmember Lucille Roybal-Allard (D-Downey), elected to Congress in 1992 as its first Mexican American female member, also announced she would retire. Based on the latest maps approved December 20 by the state's redistricting commission, her House seat will be combined with that of Lowenthal's district to form a new 42nd Congressional District that is majority Latino.

Wednesday, December 22, Governor Gavin Newsom became the latest state elected leader to endorse Garcia for the House seat. He noted he had "stood shoulder to shoulder with him during the worst of the pandemic" and "couldn't be prouder to stand with him now in his campaign for Congress."

Having emigrated from Lima, Peru with his mom as a child, Garcia would be the first LGBTQ immigrant elected to Congress. He would also be the second gay big-city mayor and second out Latino person to serve in the House, as the Bay Area Reporter noted in an online story last Friday about Garcia entering the race that morning with an announcement video and launch of his campaign website.

"I'm fighting for every kid to get the same shot that this country gave me," Garcia says in the nearly 2:50-minute video that honors his mother, who along with his stepfather died from COVID last year, and features Garcia giving his husband, Matthew Mendez, a kiss on the cheek.

Within hours of his announcement, Garcia picked up endorsements from Equality California, the statewide LGBTQ advocacy organization, and the LGBTQ Victory Fund, which helps to elect out candidates across the country. State Senator Lena Gonzalez (D-Long Beach) also endorsed Garcia Friday in a Twitter post, as did Lowenthal's son Josh.

"Following in my dad's footsteps is a monumental task. Yet there's nobody better equipped to be the voice of our community and nation than my friend Robert Garcia," the younger Lowenthal tweeted.

Among the many leaders endorsing Garcia via tweet last Friday was gay state Senator Scott Wiener (D-San Francisco), noting his "friend" will "be absolutely fantastic" as a representative in the House.

So excited that my friend @RobertGarcia is running for Congress. He'll be absolutely fantastic. https://t.co/FrNRiE1raP— Senator Scott Wiener (@Scott_Wiener) December 17, 2021

Another early endorser was California Attorney General Rob Bonta, a former East Bay Assemblymember who will be on the same ballot as Garcia next year as he seeks a full four-year term as the state's top prosecutor. Newsom tapped Bonta for the post earlier this year after Xavier Becerra departed to become the Biden administration's Health and Human Services secretary.

"I'm so excited to see @RobertGarcia in this race and I wholeheartedly endorse his campaign. He is going to make California proud!" Bonta wrote.

"1,000% with @RobertGarcia for Congress. Creative, brave, caring, tireless, authentic, compassionate, beloved, uplifting, and astonishingly effective. LB and SE LA at their finest, and a powerhouse representative in the House," Cabaldon wrote, referring to Long Beach and southeast Los Angeles.

So, too, did gay San Diego Mayor Todd Gloria, a former state Assemblymember, immediately express support for his mayoral counterpart, simply writing in his own tweet about Garcia's congressional campaign rollout, "Love this video. Love this announcement."

Oakland Mayor Libby Schaaf also was quick to come out in support of Garcia's candidacy, noting in her own tweet, "You have my full support — no one knows how to get s--- done like Mayors!"

Lesbian tennis legend Billie Jean King, a native of Long Beach where a library and tennis center are named in her honor, also took to Twitter to back Garcia, writing, "Thrilled for you. Congress will be so lucky to have you."

Garcia could become the second gay man from California and only the third LGBTQ person from the state to serve in the House, joining gay Congressmember Mark Takano (D-Riverside), who is expected to win reelection next November. (The second out House member from the Golden State was bisexual congressmember Katie Hill, who resigned from her Los Angeles-area House seat in 2019 to avoid an ethics probe into allegations she had a relationship with a congressional aide after a conservative news site published a story about her alleged affair, which she had denied.)

At least two other gay men are also aiming in 2022 to be elected to represent Southern California congressional districts, while there is a possibility of seeing a gay candidate run for a House seat in the Bay Area should a vacancy open up in the local congressional delegation once the new district lines are finalized in January.

Gay veteran Joseph C. Rocha is also seeking to be one of the first out Latino members of Congress from the Golden State. The Democrat is aiming to oust Republican Congressmember Darrell Issa from his suburban 50th Congressional District seat northeast of San Diego.

Will Rollins, a gay former federal prosecutor, is one of several Democrats planning to run next year against conservative Congressmember Ken Calvert (R-Corona) in California's 42nd Congressional District. Rollins lives in Canyon Lake with his partner.

And as last week's Political Notebook reported, there are two out House candidates in Oregon with Bay Area ties. Lesbian former Santa Clara city councilmember Jamie McLeod-Skinner is making her second attempt to win a congressional seat from the Beaver State. Former San Francisco resident Kevin Easton is the first openly gay man to run for Congress in Oregon.

With the sextet already launching their campaigns, the three-state West Coast region could go from having Takano as its lone current LGBTQ congressional member to seeing its out representation in the House grow at least six-fold come 2023.

Web Extra: For more queer political news, be sure to check http://www.ebar.com Monday mornings for Political Notes, the notebook's online companion. This week's column reported on a San Diego-based website aiming to educate voters about congressional members and candidates.