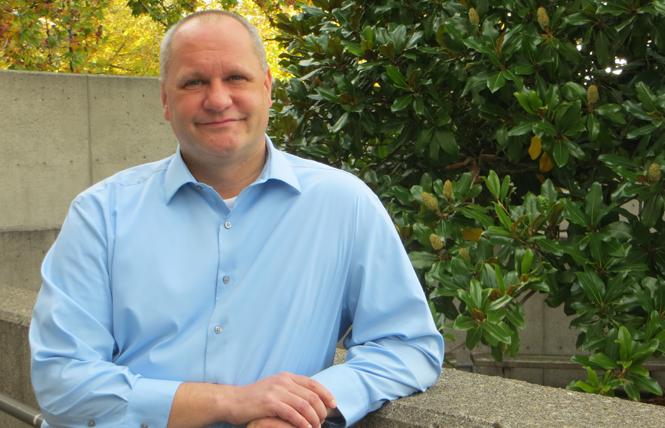 A pair of congressional candidates in Oregon with Bay Area ties is seeking to make history in 2022. Either would be the first LGBTQ House member from the Beaver State should they win their races.

As the Bay Area Reporter's online Political Notes column first reported in November, Jamie McLeod-Skinner, 54, is again running for an Oregon House seat. She was the first lesbian elected to the city council in Santa Clara, California, in 2004 and served on it for eight years.

Kevin Easton, 46, is the first openly gay man to run for Congress in Oregon. He formerly lived in San Francisco's LGBTQ Castro district in the early 2000s and worked on the campaigns of Rebecca Prozan, a lesbian who fell short in her bid for the city's District 8 supervisor seat, and former city attorney Dennis Herrera's unsuccessful bid for mayor in 2011.

Easton went on to serve as Herrera's community relations coordinator in the city attorney's office, which Herrera vacated last month when he became general manager of the San Francisco Public Utilities Commission. In 2016, Easton relocated back to his native state — he grew up in Bend, Oregon — to be with his now-husband, Jeremy Garrison-Easton, and have access to health care to treat a traumatic brain injury he suffered from a surfing accident.

They were also able to afford to buy a home in Oregon, something out of reach in San Francisco, noted Easton. Last year, due to their jobs, the couple moved to Salem, Oregon where they share their home with their four rescued cats Grandma, Chicken, Biscuit, and Eggo.

"Oregon is a lot more livable. I do love the outdoors and mountains and the change of seasons up here," said Easton. "I do love San Francisco as well."

He is running in the state's newly added 6th Congressional District, which he joked in a phone interview with the Bay Area Reporter is the House seat that California lost due to the decennial census count. It consists of all of Oregon's Polk and Yamhill counties and portions of Clackamas and Washington counties.

"You could make an argument this is California's seat," said Easton, who works for Oregon's employment department.

This is Easton's first time running for political office. Throughout his career Easton has worked on numerous political campaigns for Democrats, such as Oregon Congressmember Peter DeFazio who recently announced his retirement and former congressmember Lois Capps of Santa Barbara.

At the launch of his campaign Easton released on his website a detailed list of the policies and legislation he would advocate for if elected to Congress. Among the LGBTQ rights he would push for are counting all LGBTQ Americans on the census and codifying same-sex marriage into federal law.

"Because I haven't held elected office myself, I thought it was doubly important for me to put out an 18-point platform of what I want to get done in Congress and how I am voting. I really want the discussion to be about policy," said Easton. "It is why I am running. I felt politics in D.C. have turned to such a competitive battle between getting attention and tweets that the policy discussion has been lost."

Growing up as a gay kid in Oregon, Easton said he never dreamed of seeking elective office. He doesn't personally know McLeod-Skinner, and when he looked to find another gay man who had run for a House seat in the state to ask for advice, Easton said he realized there had never been anyone prior to him.

"I always looked at myself as a behind-the-scenes kind of guy making change that way. A lot of that was from my feeling being gay was such a liability that I never thought I would run for office myself," he recalled. "This was 20, 30 years ago. It just struck me that I can run for office; I am going to run for it."

With his candidacy Easton said he is signaling to gay boys growing up in the district today that they can also run for Congress when they come of age. He marveled at the fact that not only are there two out House candidates in Oregon but also that Oregon Speaker of the House Tina Kotek, a lesbian, is running for governor in 2022.

"That gives me the chills; that is not the Oregon I knew growing up, so we have come a long way and I am glad to be a part of that," said Easton.

He credits McLeod-Skinner for paving the way for him to seek a House seat as an out candidate in Oregon, since she was the first to do so. Luckily the two didn't end up in the same congressional district, he noted.

"Until the district lines were drawn, we didn't know who would be running against who," said Easton. "My best case scenario is Jamie wins in D5 and I win in D6, and we will have two LGBT members of Congress; that would be the best." 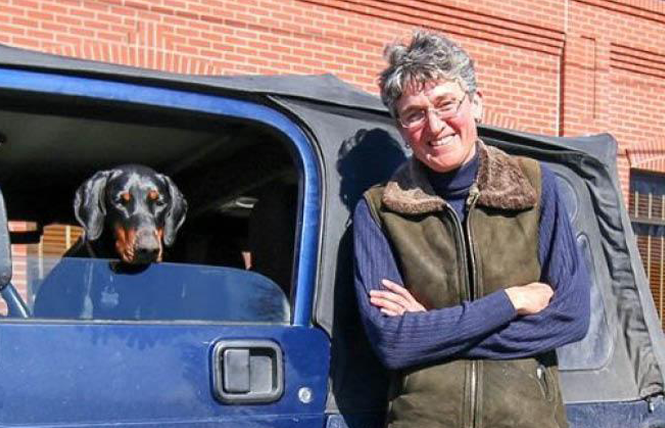 Lesbian's second campaign
McLeod-Skinner lost her first House campaign in 2018 against then-Congressman Greg Walden (R-Hood River) for the Beaver State's expansive 2nd Congressional District seat. He had held it since 1999 and opted not to seek reelection last year. A progressive Democrat, McLeod-Skinner won election in July 2019 to an at-large seat on the Jefferson County Education Service District but came up short in her bid last year to become Oregon's secretary of state.

With the decennial redistricting process creating a brand new 5th Congressional District in Oregon that incorporates parts of the former 2nd District, McLeod-Skinner has jumped into the race for the seat. She will face off against Congressman Kurt Schrader (D-Canby), a moderate Democrat, in the party's primary.

As Oregon Public Broadcasting reported earlier this fall, McLeod-Skinner lives in Terrebonne just six miles north of the boundary separating Deschutes and Jefferson counties, the line lawmakers used to separate Oregon's redrawn 5th and 2nd congressional districts. In a phone interview last month with the B.A.R., McLeod-Skinner noted that the new 5th district covers much of the areas where she ran for office in the past.

"The only way to get to and from the area I live is through the 5th Congressional District. It ends up not being a big deal," said McLeod-Skinner, who this week announced endorsements from more than 50 elected officials and community leaders throughout the district. "I've got a solid relationship with voters here."

In 2013, McLeod-Skinner enrolled in law school at the University of Oregon, graduating in 2016. The mother of four had first moved to southern Oregon as a child. Her wife, Cass Skinner, comes from a multi-generational ranching family in eastern Oregon's Jordan Valley.

During her first congressional race, McLeod-Skinner pitched herself as a "rural Democrat" and garnered local media attention for traveling around the district with her 2-year-old Doberman, Moshi, riding along in her blue Jeep Wrangler. (A photo of her leaning against the vehicle with Moshi in the driver's seat was included in an October 27 email from McLeod-Skinner teasing her 2022 electoral announcement.)

Schrader is a farmer and had worked as a veterinarian for more than 30 years before entering Congress. He is among the 19 members of the Blue Dog Coalition, a caucus in the House of Representatives of centrist or right-leaning Democrats.

He had questioned certain aspects of the Build Back Better Act, a cornerstone of President Joe Biden's agenda, but ended up voting for it in the end.

Nonetheless, his publicly debating the price tag for the social and climate policy initiatives included in the legislation has given McLeod-Skinner an opening to criticize his positions.

"He is a very unpopular Blue Dog Dem who has been undermining Biden's agenda," she told the B.A.R.
Between January and June of this year McLeod-Skinner had served as interim city manager in Talent, overseeing its recovery from a wildfire that tore through it over Labor Day weekend last year. She decided to run again for Congress because of the impact she could have in the House on her three top priorities of addressing climate change, helping working-class families rebound from the COVID-19 pandemic, and establishing good governance.

"Ultimately, this is an opportunity for folks across Oregon and across the country to support a healthier, more functional Congress," McLeod-Skinner said of the 2022 midterm elections. "Literally, your democracy is under attack."

Pointing to her vote margins in past races, McLeod-Skinner argued she does have a path to survive her party primary in the spring and win the seat in November. She expects to make a swing through the Bay Area sometime early next year to help raise funds for her campaign.

"If folks can contribute and help us make this happen, it is really exciting. This is a completely winnable race," she said. "Getting help from friends back in the Bay Area to make this happen would be greatly appreciated."

Easton also expects to hold a fundraiser in the Bay Area sometime early next year. He is aiming to raise $740,000 just for his primary race and has been hosting virtual events where he shows off his Italian cooking skills while answering questions from participants.

"I am in this to win. I think I can win," said Easton. "It will be a mad dash from March to May. I do need to raise money to be viable to get my message out."