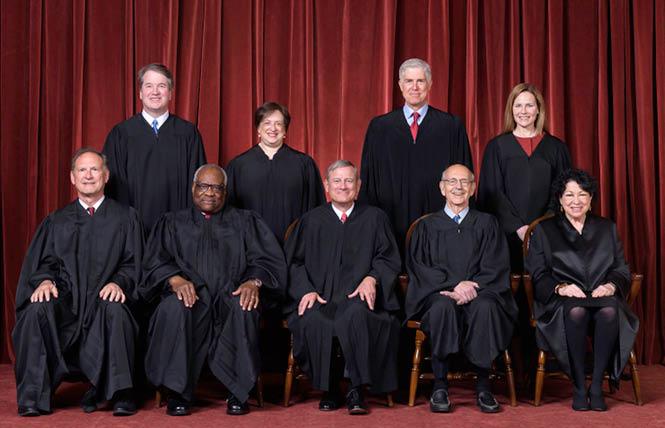 The U.S. Supreme Court seems poised to significantly change Roe v. Wade, which legalized abortion in the country. Photo: Fred Schilling, Collection of the Supreme Court of the United States

The primary issue before the U.S. Supreme Court December 1 was abortion, but a swirl of other critical questions drew the justices' attention. Among those questions was how the court's decision on abortion might affect its previous pro-LGBTQ decisions and the perception that the nation's highest court is increasingly seen as being motivated by politics.

Such prominent LGBTQ decisions as Lawrence v. Texas (which struck down bans on consensual sex between same-sex partners) and Obergefell v. Hodges (which struck down bans on marriage between same-sex partners) were part of the mix in the two-hour argument over a new Mississippi law that bans abortion after 15 weeks of pregnancy.

Numerous legal observers covering the argument in Dobbs v. Jackson said they believe the court's conservative majority is poised to undercut Roe v. Wade and Casey v. Planned Parenthood. Roe (1973) and Casey (1992) are long-standing decisions that have upheld the right of women to have an abortion. Roe said there is an implied right to privacy and liberty guaranteed by the Constitution that covers the right to choose an abortion; Casey said that, once the fetus becomes viable, states could regulate abortion to further health and safety as long as those regulations did not create an undue burden to those who seek an abortion.

Supreme Court analysts from National Public Radio, the Associated Press, the New York Times, Washington Post, and CNN (among others) all predicted the court would seriously undercut Roe and Casey.

One concern for LGBTQ activists is how damaging such a decision undermining such long-standing precedents might be to other Supreme Court precedents, such as Lawrence (2003) and Obergefell (2015). That concern was heightened by comments from Justices Amy Coney Barrett and Brett Kavanaugh. Barrett said that upholding previous decisions (known as "stare decisis") is "not an inexorable command." She pointed to the 2003 Lawrence decision overturning the 1986 Bowers v. Hardwick decision. Kavanaugh also pointed to Lawrence as an example of the Supreme Court overturning its previous decision on an issue. He mentioned Obergefell, too, though he did not identify what Supreme Court opinion he thought Obergefell overturned. (In 1972, the Supreme Court summarily dismissed a gay couple's appeal to recognize same-sex marriage, in Baker v. Nelson.)

The Lawrence and Obergefell decisions, she said, are ones "on which we rely today to protect our community's civil rights," adding that both "were built directly on the foundation of Casey and Roe."

"They reflected the growing societal understanding of our common humanity and equality under law," said McGowan. "Just as the Supreme Court in Brown v. Board of Education rejected the lie of 'separate but equal,' the Supreme Court's decisions in Lawrence and Obergefell appropriately overruled precedent where it was clear that, as was true with regard to race, our ancestors failed properly to acknowledge that gender and sexual orientation must not be barriers to our ability to live, love, and thrive free of governmental oppression."

Small middle with big implications
Most court observers predicted that three conservative justices — Clarence Thomas, Samuel Alito, and Kavanaugh — seem almost certain to vote to uphold the Mississippi abortion ban. Barrett's comment that precedent is "not an inexorable command" could be read that she is amenable to chopping down Roe and Casey. The three liberal justices — Stephen Breyer, Sonia Sotomayor, and Elena Kagan — appear poised to vote against the Mississippi ban.

That leaves Chief Justice John Roberts and Justice Neil Gorsuch to cast the key votes. Both made comments suggesting they were open to a ruling that might reflect some middle ground. For instance, Roberts wondered whether Mississippi's regulation at 15 weeks was really different than Roe and Casey's allowance of regulation at fetus viability.

Sotomayor dramatically raised the issue of how undercutting Roe and Casey would likely affect the reputation of the Supreme Court in the minds of the public. Noting that Mississippi acknowledged it brought its appeal because there are new conservative justices on the high court, Sotomayor said she did not see how the court could "survive the stench that this creates in the public perception that the Constitution and its reading are just political acts."

"If people actually believe that it's all political, how will we survive?" asked Sotomayor, of Mississippi's Solicitor General Scott Stewart. "How will the court survive?"

When Stewart said the court just needed to ground its opinion "in the Constitution, in text, structure, history, and tradition," Sotomayor retorted, "Casey did that."

A few minutes later, Barrett asked the Mississippi solicitor general whether a decision in favor of the state ban would call into question any of the cases Sotomayor had just identified. Stewart said "No," adding that those cases, including Lawrence and Obergefell, were "safely out of reach" of the Mississippi abortion decision. He specifically added that, "you can't ban intimate romantic relationships between consenting adults, can't ban marriage of people of the same sex."

Sotomayor said Stewart's answer did not seem to make any sense and added that Mississippi's new abortion ban amounted to a "religious view."

"The issue of when life begins has been hotly debated by philosophers since the beginning of time," said Sotomayor. "It's still debated in religions. So, when you say this is the only right that takes away from the state the ability to protect a life, that's a religious view, isn't it?"

LGBTQ groups have long considered the right to an abortion to be one of "vital importance" to queer people. In briefs filed by parties with strong interest in the appeal, lesbian Senator Tammy Baldwin (D-Wisconsin) and bisexual Senator Kyrsten Sinema (D-Arizona), along with all nine LGBTQ House members, signed onto a brief urging the Supreme Court to strike down Mississippi's ban.

Two dozen LGBTQ groups — including Lambda Legal, GLAD, the National Center for Lesbian Rights, the Human Rights Campaign, Equality California, Equality North Carolina, LPAC, and longtime marriage equality activist Evan Wolfson — also filed a brief arguing against the Mississippi ban. The groups' brief states that the Roe and Casey decisions, upholding the right of people to have an abortion, are of "vital importance" to sexual minority women, noting that federal statistics estimates one in 12 women between 18 and 44 is a sexual minority.

Roe to be overturned, leaked decision says
Sign up!