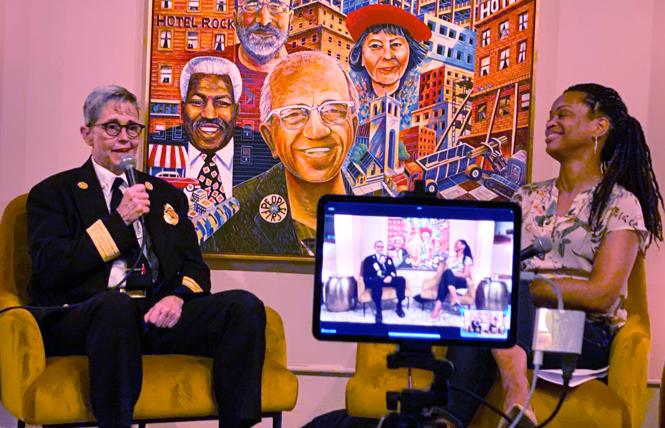 San Francisco Fire Chief Jeanine Nicholson, left, appeared at Manny's and was interviewed by Precious Green, the director of programming at the gay-owned cafe and event space in the Mission. Photo: John Ferrannini

In her first public comments about three pending lawsuits against the department alleging anti-LGBTQ discrimination, lesbian San Francisco Fire Chief Jeanine Nicholson told the Bay Area Reporter she has made it clear such behavior is unacceptable.

Nicholson had declined an interview with the B.A.R. earlier this year after lesbian Assistant Fire Chief Nicol Juratovac became the third — and highest ranking — member of the LGBTQ community to publicly accuse the department of discrimination in 2021.

The B.A.R. was able to pose a question to Nicholson — the city's first LGBTQ fire chief — at an event she attended at Manny's, a gay-owned cafe and event space in the Mission neighborhood. She took part in a conversation November 30 facilitated by Precious Green, Manny's director of programming.

During the question-and-answer period, Nicholson was asked: "The city has faced three lawsuits from LGBTQ firefighters alleging discrimination since the pandemic. Considering this, what are you doing to make the SFFD a safer place for LGBTQ firefighters to work, and to recruit within the LGBTQ community?"

Nicholson responded that as far as recruitment goes, "we are building our recruitment through our diversity, equity, and inclusion office. That will be part of it; it's not a racial equity only. We just started to staff that office with a captain of recruitment, and are working intently with others about how to build that out."

With regard to the lawsuits and anti-discrimination measures in the workplace, "I can't get into particulars about that, but I have encouraged all of our members if they have an issue to come forward. I've been very clear about being queer, being out, and what is acceptable behavior in the department but I can't comment on the lawsuits."

The three lawsuits
Gay firefighter Keith Baraka was the first to file suit against the city back in January, as the B.A.R. reported, on the basis of racial and sexual orientation discrimination. Baraka alleged he was disciplined after speaking out, and compared Nicholson to Roy Cohn, long said to be gay himself, yet who targeted federal officials based on real and suspected homosexuality while serving as chief counsel to the late Senator Joseph McCarthy (R-Wisconsin) during the 1950s Red Scare.

"That's how bad she is," Baraka said.

Baraka did not immediately respond to a request for comment December 1. His attorney, former city supervisor and mayoral candidate Angela Alioto, a straight ally, is also representing Ronnie Jones, who as the B.A.R. reported back in February is suing the city alleging he was discriminated against on the basis of his race and gender identity. Jones, a paramedic for the fire department, claims he faced a hostile environment after coming out as transgender in 2015 and was passed over for a promotion.

After being read Nicholson's remarks, Alioto said that Nicholson being an out lesbian isn't relevant to whether the department is practicing discrimination.

"The misconception that because one is gay, other gay people are treated equally, is a problem I see on a regular basis throughout the city, but also all the corporations we sue," Alioto said. "There's a sense that 'I'm gay. How can I discriminate against you?' Her comment has that she's gay in it but me being gay, or you being gay, isn't relevant. You can see from her comment [that] she's coming from an unequal place."

"It's something I have to address in front of a jury," she continued.

Alioto said that "the concept of treating everyone equally is lost on the city" and that "the way Keith and Ronnie were treated is despicable."

Alioto said that both cases are currently in the litigation process and that trial dates are about six months away. "We're trying to get documents back and forth and it's a process," she said.

Juratovac sued in May, alleging both discrimination and whistleblower retaliation. Her attorney, Mark P. Fickes, a gay man, told the B.A.R. that the suit has been scheduled for trial in December 2022.

"I'm sure the city attorney wouldn't want her to comment," Fickes said. "The lawsuit is pending. I don't want to get into the details of our suit."

In a statement late January 25, after Baraka filed his suit, then-San Francisco City Attorney communications director John Coté stated, "The city takes equal employment issues seriously and is committed to fostering a welcoming workplace free of discrimination or harassment based on race, sexual orientation or any other protected characteristic.

Coté reiterated those comments after Jones filed his lawsuit.

After Juratovac filed her lawsuit, an SFFD spokesman commented but declined an interview request with Nicholson.

"The city and the Fire Department take equal employment issues seriously," SFFD spokesman Lieutenant Jonathan Baxter stated. "We are committed to fostering a welcoming, inclusive workplace free of discrimination or harassment based on race, gender, sexual orientation, or any other protected characteristic. We are also committed to a workplace free of retaliation for any protected activity. As this involves a personnel matter, we are unable to comment on it at this time."