Hanukkah celebration returns to the Castro 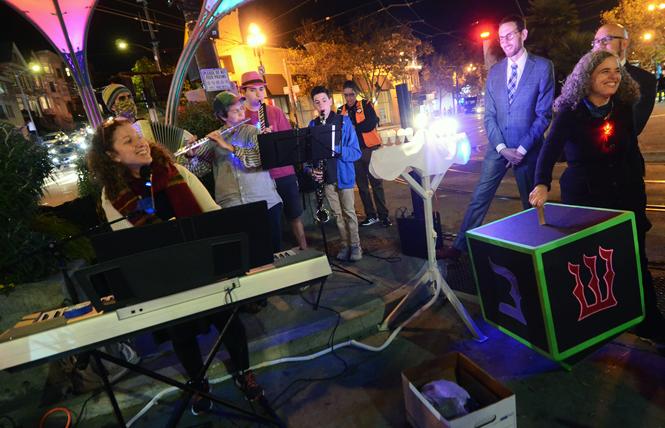 After canceling the public Hanukkah celebration in the Castro last year due to the COVID-19 pandemic, about 100 people turned out November 30 for the return of the large menorah in Jane Warner Plaza.

Hanukkah is the Jewish Festival of Lights. The menorah lighting was organized by Congregation Sha'ar Zahav, San Francisco's LGBTQ synagogue; the Castro/Upper Market Community Benefit District; and the Castro Merchants Association. The majority of attendees were members of the synagogue and there were also allies to the Jewish community present, as well as dignitaries such as gay state Senator Scott Wiener (D-San Francisco) and gay District 8 Supervisor Rafael Mandelman, who are both Jewish. Also on hand was gay former District 9 supervisor David Campos, who is currently running for state Assembly.

The festivities were led by Sha'ar Zahav's leader, Rabbi Mychal Copeland, who is a lesbian, and Cantor Sharon Bernstein.

"I'm thrilled to be out here this year," Copeland told the Bay Area Reporter. "Two years ago it rained and last year we were canceled due to COVID, so we have been waiting for the community to be together in the Castro again. This is our favorite event of the year. Our congregation only opened up to in-person services a few weeks ago so it's especially delightful to see everyone out here tonight."

Attendees were also happy to be back. The menorah celebration has taken place for several years, up until last year's hiatus.

"I feel great about being here," said congregant Ora Prochovnick, a 64-year-old queer woman. "It's wonderful to be together again. Hanukkah is about rededicating so it feels great that we can be together and celebrate this rededication again."

Music for the evening was provided by Gay-Iz-Mir, Sha'ar Zahav's in-house Klezmer band, and by Bernstein, who stood at the keyboard and sang traditional Hanukkah melodies.

"It is the third night of Hanukkah," Copeland noted as she addressed the crowd, as the weeklong festival began at sundown November 28. "I'm glad that it has not passed you by because many in our community are just waking up to the fact that it is indeed Hanukkah already. So good for you, you not only knew, but you got out here, and it is wonderful to see you. It is the third night that we are bringing some light into the world, and this is the perfect place to get to do it."

Bernstein then led the crowd as people said the blessing for lighting the Hanukkah candles.

"One of my favorite Hasidic commentators said that we're not just supposed to light the candles," said the rabbi. "That's not necessarily the end of what we're supposed to do at Hanukkah, we're actually supposed to be a candle, we're supposed to ourselves bring light into the world. So my intention for myself and for all of you tonight is, how can we be that? Individually, each one of us this week, in general, how can we go into this season bringing a little bit of light to the people we see in our lives, to the greater world, to helping in the act of 'Tikkun olam,' of repairing the world in all the ways it desperately needs right now."

Copeland then lit the first light on an electric menorah.

"I want to thank my rabbi, and my cantor, and my shul [synagogue] for being here again," said Mandelman as he took to the microphone. "It's wonderful to be back. Yesterday we got to do the Christmas tree down the block, it was a great night and thank you to the merchants for doing that and thank you for being back today. And of course to Andrea [Aiello] of the Castro Community Benefit District."

The Castro holiday tree was lit during a ceremony November 29 that marked a return of the popular event. While there was a tree at 18th and Castro streets last year there was no public ceremony because of the pandemic.

Mandelman also announced the presence of Jeffrey Tumlin, a gay man who is director of the San Francisco Municipal Transportation Agency.

"As we stand here at this great transit place my intention for the new year as your county transportation authority chair is for us to restore all of the service that we had pre-pandemic, and actually have better service than we had pre-pandemic," Mandelman continued, referring to his role on the transportation body, the board of which is made up of all 11 supervisors. "I know that Jeff is working on that every day, so from my lips to God's ears."

Mandelman lit the second light on the menorah. Wiener then stepped up to the microphone.

"I am so excited that we're all here," Wiener said. "The Castro is alive, and we're still here after everything that's happened in the last year and a half. And frankly, for this community, after everything that's happened for the past 40 years with HIV, this community is so strong, and it's such an honor to be a part of it. This pandemic revealed many, many things — good, bad, and ugly, and one of them revealed and made worse is the food insecurity in this community and the number of people in San Francisco and elsewhere who don't have enough food and didn't before the pandemic and really don't now. So in the spirit of Tikkun olam we have to make sure that everyone always has enough food to put on the table, let's recommit to that."

The crowd applauded as Wiener lit the third light on the menorah.

Song sheets were handed out and Bernstein, still standing before the keyboard, led everyone in the singing of traditional Hanukkah melodies, both in Hebrew and in English. Among the tunes was Tom Lehrer's comical "Hanukkah in Santa Monica." Some people danced as Aiello handed out jelly doughnuts.

"I'm so excited to be doing this again," Aiello told the B.A.R. "We missed it last year and it's wonderful to be collaborating with the Castro Merchants and Sha'ar Zahav."

The crowd was obviously enjoying themselves.

"I've made attending the Castro Menorah lighting an annual observance to support my Jewish siblings and always leave smiling," said John Brett, a 44-year-old queer man who is a faithful and fabulous minister with the San Francisco Night Ministry. "How can someone not enjoy themselves with this music?"