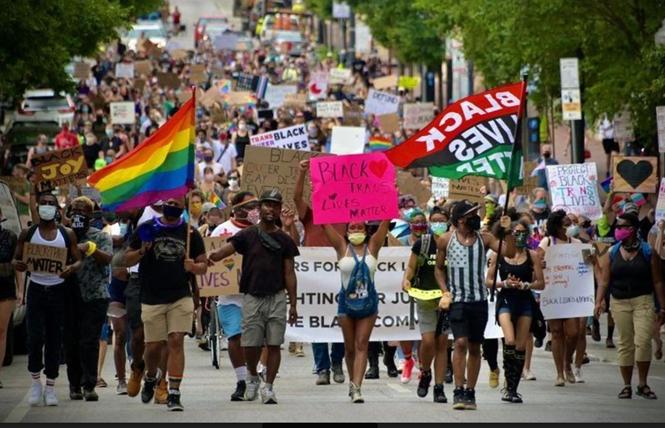 The global Pride event specifically celebrating the Black LGBTQ community around the world announced its partnership with Pride Toronto and Blackness Yes! to create the hybrid in-person and virtual event in a November 29 news release from the organization.

The Pride events celebrate Black queerness and contributions to, and the future of, the LGBTQ movement.

GBP announced its leadership team and new website in a November 17 news release.

The in-person event was inspired by the response to the first two virtual Pride events and requests from pridegoers to have a real life event.

"It was really important for us to meet in person more as a celebration, not only of our culture and our diversity, but also to celebrating our Blackness and our unity ... as Black global citizens," GBP Vice President Rikki Nathanson said.

"We are a global community of vibrant, strong people, and we need to celebrate that," she continued. "Celebrate our diversity, our culture, our fabulosity."

"We're so happy to combine our efforts in 2022 as the first guest city for Global Black Pride inaugural in-person/hybrid event," wrote Craig Dominic, programmer at Blackness Yes! in an email interview with the B.A.R. "Black Pride is a political act whether we're protesting or dancing."

The importance of Black pride in general is that "many of us find ourselves othered in both LGBTQ and Black communities," wrote Dominic, a 42-year-old gay Black man, who is looking forward to working with the GBP team to produce the event calling GBP and Blockobana the "perfect closing party."

Blackness Yes! has created safe spaces for "African, Black and Caribbean LGBTQ2S folk in Toronto," for nearly a quarter-century. The organization produces Toronto Black Pride and ends with the daylong celebration Blockobana during Caribana and Canada's Emancipation Day in July-August. Blockorama, Blockobana's sister event, is held during Toronto Pride Month.

Pride was a riot
Global Black Pride was founded in 2020 amid the global racial reckoning and the pandemic when many Pride events either went on hiatus or went virtual.

"There is a need for this," GBP's co-founder and president Micheal Ighodaro told the B.A.R. "People really do want to see themselves on TV or see themselves be celebrated, people that look like them."

Ighodaro, a 34-year-old gay Black Nigerian who has lived in the United States for a decade, felt that Black queer people have largely been invisible in the white mainstream LGBTQ movement and usually given space as a side event, not front and center.

"Black people are part of this movement," Ighodaro said, stating that two of the initiators of the Stonewall riots were Black transgender women — Marsha P. Johnson and Miss Major Griffin-Gracy — and another was a Black butch lesbian, Stormé DeLarverie. Today, he noted, there are Black LGBTQ leaders and Black prides across the globe.

Carolyn Wysinger, a Black lesbian who is board president of San Francisco Pride, expressed joy about the event but only learned of it after the announcement.

"It is amazing to see Black LGBTQ leaders come together on a global stage. We understand that anti-Blackness is taught around the world and the concept of joining together to create new narratives and platforms is absolutely necessary," Wysinger wrote in an email.

"The list of ways that Black LGBTQ people have shaped queer culture is endless. However, when it comes to being in position to lead and shape the direction of LGBTQ spaces and organizations we are still passed over," she stated.

Wysinger stated that despite her rise to a prominent position in one of the most well-known Pride organizations in the world her presence is a "constant reminder to all of us of where the organization has come from, what it needs to heal, what it needs to undo, and how long it will take to work toward equality."

One of the ways Black and Brown queer people have been rendered invisible in the larger movement is that their issues have not been put front and center or gained the majority's support to fight for, the leaders said.

Decriminalization of same-sex relationships and police brutality, not necessarily same-sex marriage or to serve openly in the military, are important to Black LGBTQ people, Ighodaro said.

"Our goal was to create a space and to bring everyone together to have a platform to connect, to share, and to celebrate," he said, adding that people who do not normally get to be a part of pride events now "feel like they can be part of pride because they see themselves being celebrated."

Ighodaro said the events have been put on through the support of Grindr For Equality, the nonprofit arm of the gay social network and dating app, and in-kind donations. A budget for the 2022 events was not available.

Grindr for Equality did not respond to a request for comment.

The Black pride organization is no longer associated with Global Gay Black Men Connect, which sponsored the new pride organization at its inception and during its first two events, Gerald Garth, GBP's head of events, media, and communications, told the B.A.R.

The response to the global initiative has been overwhelmingly positive.

"People have been so enthusiastic and the response has been so mind-blowing," Ighodaro said. "They never knew how important a global Pride would be until we started this initiative. There is the space and the need for it."

Nathanson added, "It goes to show not only how important this event is, but how crucial it is for this event to happen."

A movement
Last week, GBP announced its global team made up of LGBTQ Black activists from Africa, the Caribbean, Europe, and North America.

British political activist and co-founder of UK Black Pride Phyll Opoku-Gyimah, who was tapped to serve as director of the human rights conference, stated, "The ultimate goal of Global Black Pride is to center, uplift, and celebrate LGBTQI+ Black people and the cultures and issues that are important to us all.

"Across the world, LGBTQI+ Black people help drive movements for justice and equality, have an outsized impact on popular culture, and contribute to societies in which our lived experiences are not taken into meaningful consideration," she continued.

Ighodaro, the network's visionary, is joined by Nathanson, Garth, and Kenita Placide, chief of finance.

Ighodaro is an activist, public health expert, and community engagement strategist. Nathanson is a Zimbabwean transgender asylee and activist who founded the Trans Research Education Advocacy and Training. Placide is a human rights, HIV, and LGBTQ activist and is the co-executive director of United and Strong Inc., Saint Lucia's first and only LGBTQ organization. Garth is an award-winning editor and journalist and chief operating officer at Arming Minorities Against Addiction and Disease.

Speaking about GBP and the team's goals, Ighodaro said, "We are committed to an inclusive and wide-reaching movement that brings all Black LGBQTI+ experiences and equity to the forefront unapologetically."

Nathanson hopes as many people as possible come from Africa, Asia, the Caribbean, Central and Eastern Europe, Central and South America, and the Middle East to Toronto for or join virtually Global Black Pride.

The Pride organization plans to create a global fund to support organizers and experiences around the globe, including the launch of a scholarship fund, the leaders said.

Oakland Black Pride, which held an event in the East Bay earlier this year, did not respond to a request for comment.

Out in the World: Israel's LGBTQ community reeling from two hard-hitting events
Sign up!