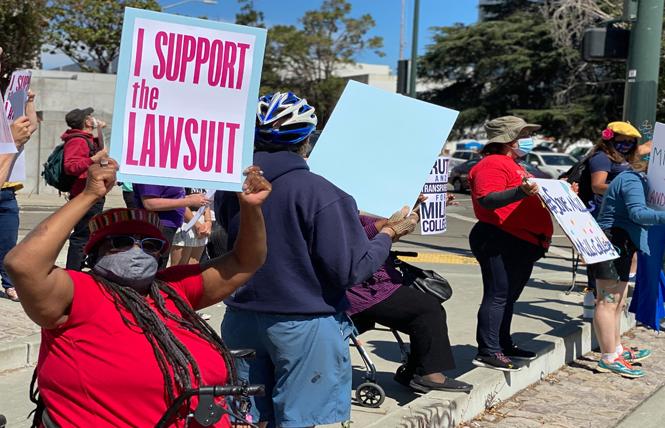 The proposed merger of financially-strapped Mills College in Oakland and Northeastern University in Boston has turned into a legal fight in which supporters of East Bay school accuse its leaders of giving up.

Mills College alumnae rallied outside of the Alameda County Superior Courthouse in Oakland August 2 to support a lawsuit they say is necessary before the school goes through with the planned merger.

"We are hoping the judge rules in our favor for truth and transparency to determine the future of Mills," Alexa Pagonas, the vice president of the Alumnae Association of Mills College Board of Governors, told the Bay Area Reporter. "We're open to conversations about what might need to be done in Mills' future — we just want to be part of the conversation."

Pagonas, a straight ally, was part of Mills' class of 1991. She joined the Save Mills College coalition, which has asked the state attorney general's office to investigate the school, at the demonstration.

Mills was to be used for its classroom and dormitory space by UC Berkeley just a few miles away.

But in July, Mills College President Elizabeth L. Hillman, a lesbian who took over in 2016, announced a change of plans: the school was in talks to be acquired by Northeastern University, a much larger private research university in Boston. A vote on this acquisition might be held as soon as August 12 by the school's governing body.

Under the aegis of Northeastern, Mills would accept both men and women as undergraduates, according to the plans. Protesters focused their remarks on the success of the lawsuit, which was first filed against Hillman by Mills alumnae on June 7.

Viji Nakka-Cammauf, Ph.D., sits on the college's board by virtue of her position as president of the Alumnae Association of Mills College Board of Governors. The civil complaint, filed in Alameda County Superior Court on behalf of her and other alumnae, alleges that the trustees have not been given the information they need to make an informed decision about the future of the college.

The lawsuit asks the college to provide "financial data, term sheets, due diligence, consultant reports and other reports, other materials ... and other information regarding the facts."

Mills College declined to make Hillman, or any other Mills administration official, available for an interview. However, it did send the B.A.R. a statement attributed to her denouncing the suit and praising the proposed alliance between the two schools.

"This lawsuit is an unwise, unsubstantiated effort to undermine confidence in the leadership of the college at precisely the moment that the board and college officers have brought forward a plan that will enable the College to better support its students, sustain its mission, support the continued employment of its faculty and staff, expand its impact, and offer greater benefits to alumnae, the college's neighbors, and the City of Oakland," Hillman stated.

"We view the Mills-Northeastern alliance as a new model for the future of higher education, and we invite all graduates of Mills who want to be a part of it to join us in envisioning that future. And we urge the [Alumnae Association of Mills College Board of Governors] to rededicate its resources to supporting students and Mills College rather than funding a costly and misbegotten legal fight," she added.

In a statement Renata Nyul, the vice president for communications and spokeswoman for Northeastern University, expressed hope in the merger.

"We remain very excited about a potential partnership with Mills College, especially the opportunity to advance Mills' signature strengths of women's leadership, social justice, and access to education," Nyul stated. "Change is rarely unanimous, but we believe that a Mills-Northeastern alliance will expand the capacity of both institutions to serve students and society for generations to come." 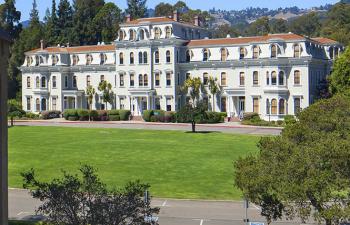 Mills College in Oakland is considering a proposal to merge with Northeastern University in Boston. Photo: Courtesy Mills College

'They gave up'
Nadine Dixon, a self-described dyke who was a member of the class of 2009, said that Hillman is to blame for the college's precarious situation.

"Hillman says these students are 'price sensitive.' Yeah, who the hell isn't?" Dixon asked. "There's been a 30% decline in enrollment on her watch. It's her fault — taking away something the community desperately needs to stay here.

"They gave up," Dixon added. "They need to resign. Let's get leadership."

Speaking before assembled members of the media between Lake Merritt and the courthouse, Alice Hewitt, a genderqueer dyke who was a member of the class of 2015, said that Mills was "a great spot to discover so much about yourself."

Mills is "a good spot to realize you're queer even if it's obvious to everyone else," Hewitt said. "Women have a reputation for tearing each other down, but that's not what Mills is about. Whether cis or trans, white or a person or color, it's a place you can be yourself."

Several speakers referenced the two-week strike 30 years ago, saying that they won then and will do so again.

Karina Robinson, who is a lesbian who was a member of the class of 1988, said that a judgment is needed so the community can have clarity.

"Frankly with all the flip-flops, what the hell is she [Hillman] doing?" Robinson asked. "Just tell us."

Women's-only undergrad ends at Mills, as college merges with Boston school
Sign up!