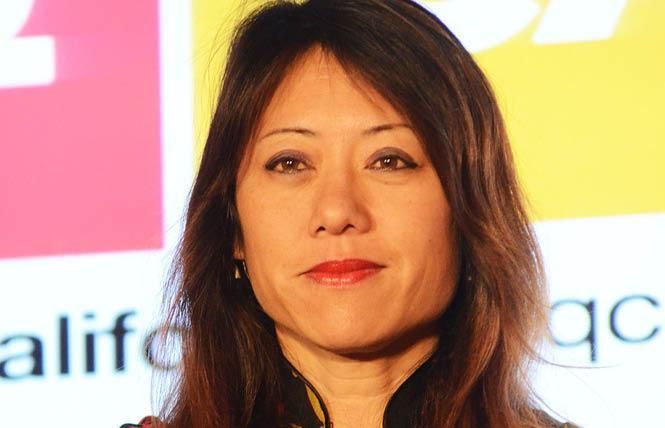 Waukeen McCoy, a San Francisco attorney, is representing Judith Blackwell in her suit against Ma. McCoy told the Bay Area Reporter on July 20 that Ma made a private resolution impossible.

"We tried to resolve this matter informally," McCoy said. "There was no response. She never responded to us. We had no choice but to file a lawsuit."

Blackwell, who is Black, was the executive director of the California Tax Credit Allocation Committee from September 2019 to January 2021, having been appointed by Ma, who was elected treasurer in 2018.

"By the time dinner would end it would be impractical for plaintiff [Blackwell] to drive home and come back early the next day," the complaint states. "Therefore, Ms. Ma invited plaintiff to stay at the Westin hotel in Sacramento, CA where she would have her own room paid for by Ms. Ma."

Blackwell began to stay at the hotel with Ma and Ma's chief of staff, Genevieve Jopanda, who'd also join them for dinner. Eventually the location switched from a Westin to a Sheraton.

"Ms. Ma proposed that she share a room with plaintiff and that Ms. Jopanda have her own room," states the complaint, which claims that during the time Ms. Ma shared a room with plaintiff, she exposed her bare rear end directly to Blackwell numerous times. Ma's actions were not accidental, argues the complaint, and were done to get Blackwell's attention. Blackwell contends she was made uncomfortable and was fearful to comment on Ma's lewd behavior.

"As plaintiff continued to work for Ms. Ma and spend time with her after work, Ms. Ma gave plaintiff gifts," the complaint continues. "Ms. Ma provided plaintiff with jewelry, paintings for her wall, and edible marijuana so that she could sleep. Plaintiff also had a parking space in front of the building (previously it was two blocks away), and was told by Ms. Ma that she was going to get promoted to deputy treasurer after she dismissed Jovan Agee, another African American employee, from the position."

In May 2020 the trio rented a home through Airbnb, according to the complaint.

"While staying at the Airbnb home, Ms. Ma exposed her bare rear end again to plaintiff," the complaint states. "A few weeks later, Ms. Ma climbed into plaintiff's bed while plaintiff was attempting to sleep in it. Once noticing Ms. Ma in her bed, plaintiff pretended to sleep out of fear and confusion."

After Blackwell suffered a stroke in September 2020, she alleges that Ma started to treat her differently.

She didn't get the deputy treasurer job she'd been promised, the complaint states. Furthermore, that parking space was gone too.

"Ms. Ma, who was aware that plaintiff was recovering from a stroke, requested that plaintiff to complete tasks that required two people to complete, and require her to work past 5:00 p.m. and spend all night completing a task for the next day," the complaint states. "Plaintiff
was not offered any accommodations or assistance in completing the tasks."

"Plaintiff was not given a reason as to why she was being terminated," the complaint states. "Plaintiff is informed and has good faith belief that the person that replaced her is a less-qualified Caucasian female." (That belief is the genus of the race discrimination cause of action.)

"Same-sex harassment is the same as any other harassment," McCoy said. "If this was a man doing this to a female subordinate, it'd be problematic, so I think it's important to shed light on this.

"Fiona Ma has power," he continued. "She used her power over someone who was vulnerable."

Ma spokesman Bill Ainsworth did not respond to a request for comment, but Ma issued a written statement to media outlets July 19.

"I am saddened and disappointed by these baseless claims," Ma stated. "I want to thank everyone for the outpouring of support I've received today. To set the record straight, we have repeatedly refused to respond to the attorney's attempts to settle. We look forward to bringing the truth to light in court."

McCoy said he welcomes the truth coming out.

"They can go look at the receipts at the Weston and the Sheraton where we allege these things occurred," McCoy said.

Blackwell is seeking special, general and punitive damages "in an amount according to proof at trial," the complaint states.

Ma, 55, is a Democrat who served as a city supervisor from 2004 to 2006, representing District 4, which covers the Outer Sunset and Parkside neighborhoods.

She served in the state Assembly from November 2006 to November 2012, including two years as Speaker pro Tempore. She was the first Asian American woman to serve in that capacity. Her district included over 400,000 constituents across San Francisco, Daly City, Colma and Broadmoor.

Subsequently, Ma served on the California Board of Equalization from 2015-2019, including one year as chair, from February 2016 to February 2017.

Ma told a Sacramento Press Club event in 2019 that she's open to running for governor in 2026, after Governor Gavin Newsom will have had the opportunity to serve two terms in office, according to the Sacramento Bee.

She has been married to Jason Hodge, currently the Oxnard Harbor District board president, since 2011.