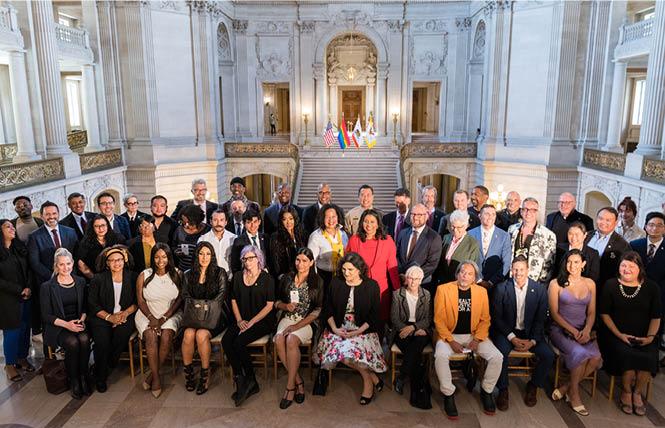 Now that the 26 members of the reconstituted LGBTQI+ Advisory Committee for the San Francisco Human Rights Commission have taken their oaths of office, the oversight body is expected to hold its first meeting in August or September. Its seats are divided between community members, representatives from elected officials, and staff or leaders from city-based LGBTQ nonprofits and social service agencies.

At a ceremony on the mayor's balcony under the rotunda of City Hall June 23, Mayor London Breed swore in the more than two-dozen appointees to the committee. As the Bay Area Reporter was first to report in May, the human rights commissioners had forwarded on to the mayor their recommended picks for 24 of the committee seats from the nearly 100 people who had applied to serve on the advisory group.

Breed called the reconstitution of the city's LGBTQ advisory committee "a historic milestone." It is expected to meet at least quarterly throughout the year and provide guidance and input to city leaders on how they can best meet the needs of LGBTQ San Franciscans.

"The committee has a rich history, and today we are affirming its leadership by expanding its representation," said Breed. "Moving forward, elected officials, non-profit leaders, community members, and other partners will come together and communicate under one body."

People of color make up 75% of the committee's members, and it has 50% transgender and nonbinary representation, making it one of the city's most diverse legislative bodies, according to the mayor's office. LGBT Asylum Project co-founder Okan Sengun noted in a Facebook post that his selection for a committee seat makes him the first openly gay Turkish immigrant appointed or elected to a government body in the United States.

"I am proud to announce that I am officially a member of the LGBTQ+ Advisory Committee of San Francisco Human Rights Commission!" he wrote.

Four seats are being filled by representatives of elected officials who are all gay men: David Latt, a senior immigration specialist for House Speaker Nancy Pelosi (D-San Francisco); Omar Rincon, a district representative for gay state Senator Scott Wiener (D-San Francisco); Joe Adkins, an administrative aide for gay District 8 Supervisor Rafael Mandelman; and city firefighter Keith Baraka, an elected member of the Democratic County Central Committee that oversees the San Francisco Democratic Party. Baraka is one of three LGBTQ members of the city's fire department who have filed lawsuits alleging they have been discriminated against on the job.

Initially Tom Paulino, a gay man who is the district director for Assemblyman David Chiu (D-San Francisco), and Zahra Hajee, who is bisexual and had worked for Wiener, were suggested by the HRC to serve as delegates for elected leaders. But Hajee was hired by U.S. Senator Alex Padilla (D-California) to be his Bay Area field representative, while it is highly expected that Breed will name Chiu to be the next city attorney, succeeding Dennis Herrera when he officially becomes general manager of the city's Public Utilities Commission.

A fifth seat representing an elected official was scrapped. Meanwhile, Michael Discepola, a gay man who had been vice president of behavioral health and substance use at the AIDS foundation, initially had been selected by the HRC to serve on the advisory committee. But he was among the 17 employees the nonprofit laid off at the end of April, so he is serving as a non-voting affiliate member of the LGBTQ advisory committee.

"It's such an honor to be a part of this new chapter for the advisory committee," said Joseph Sweiss, a queer man who is the HRC's vice chair and worked on reviving its LGBTQ advisory body. "The more we learned about the history and legacy of the advisory committee, the more we were inspired to create a bold, new body that gives everyone a seat at the table. Through this new format, the committee will enable the organizations and leaders already working within the community to better address the overlaps, gaps, and overall needs and come up with solutions together."

The COVID pandemic delayed the process to recruit members for the revamped advisory committee.

"Many of the city's challenges today disproportionately impact our most vulnerable populations, the most recent example seen during the COVID-19 pandemic," said Sheryl Davis, Ph.D., director of the Human Rights Commission. "The mayor and Human Rights Commission worked hard to ensure equitable COVID response and recovery that was informed in partnership with San Francisco's diverse BIPOC and LGBTQI+ communities. Equity, intersectionality, and LGBTQI+ justice was at the forefront of our community engagement process and was critical to our success."

The administration of committee members' oaths of office came amid Pride week as both Breed and members of the Board of Supervisors announced several new LGBTQ initiatives and funding requests. As the B.A.R. first reported online June 22, Breed and gay District 8 Supervisor Rafael Mandelman have introduced a change to the city's administrative code that will allow for the collection of sexual orientation and gender identity demographic data among city employees and those who apply for jobs with the city in a voluntary and anonymous way.

Mandelman, the lone LGBTQ member on the board, and District 6 Supervisor Matt Haney, the budget chair, announced in a Guest Opinion piece for the B.A.R.'s June 24 annual Pride issue that they were seeking an additional $2 million in the city's fiscal year 2021-2022 budget for a wide array of LGBTQ services and programs. The funding would support health care, rental subsidies, economic empowerment, and cultural initiatives within the local LGBTQ community.

"For decades, the Advisory Committee had a direct impact on ground-breaking legislation impacting the City's diverse LGBTQ+ communities," said Mandelman. "Now, we can look forward to this inspiring new membership to facilitate stronger conversations within City Hall and offer unique perspectives on the policies and issues affecting us today. I look forward to working with my fellow Committee members to advocate for our diverse communities."

For more information about the advisory committee visit https://sf-hrc.org/lgbt-advisory-committee-lgbtac


Due to the Fourth of July holiday the Political Notes column will return Monday, July 12.