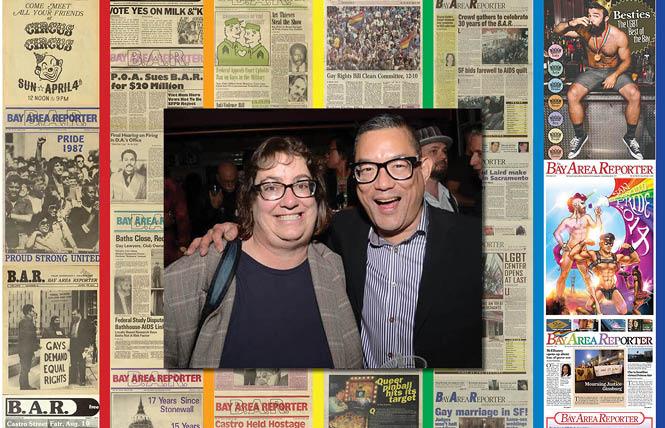 It's a big deal that any independent media outlet can mark a significant anniversary this year, as the COVID pandemic has put extra strain on publications in an already tough industry. It's even more of a feat for an outlet covering queer news and culture.

On this week's Out in the Bay podcast and radio program, news editor Cynthia Laird and publisher Michael Yamashita recount the Bay Area Reporter's founding 50 years ago, high and low points of queer civil rights reflected in the B.A.R.'s coverage, and the challenges of staying alive and vibrant today.

The Bay Area Reporter started in 1971 as a gossipy "bar rag" biweekly newspaper covering San Francisco's gay bar culture and grew over the decades into a nationally important LGBTQ news publication. (It later went weekly.) Today it boasts the largest readership of any U.S. LGBTQ news outlet and the longest continuously published.

When the pandemic shutdown began in March 2020, Yamashita said he vowed to keep publishing despite massive ad revenue losses. "Our record is unblemished," he said, noting that the B.A.R. published after the 1989 Loma Prieta earthquake despite the paper's office losing electricity. "We were not going to cease publication because of COVID."

"We always talk to LGBTQ people in our stories," said Laird, while mainstream media often don't. As an example, with current coverage of anti-trans laws that are popping up around the country, she said, "many stories in mainstream papers don't [quote] trans people. We make a real, conscious effort to get the voices in our stories of those affected by whatever issue we're writing about."

Newspaper ad income has been down for many years, as online services gained popularity. Before Craigslist and similar services "decimated" personal ad revenue, Laird said the B.A.R. had "pages and pages of classified advertisements, personal ads and all that stuff" — including massage and escort ads. When she started at the B.A.R. in 1996, "on Monday mornings, the guys would line up out the door to place their personal ads. I'd never seen anything like it."

Now that the worst of COVID seems behind us, Laird and Yamashita both expressed confidence about finishing this year stronger than last.

"Print is the mothership of our enterprise," he said, "but it really is about all these different platforms and adding them as they are useful to readers."

Hear more from Michael Yamashita and Cynthia Laird on this week's Out in the Bay — Queer Radio from San Francisco. The program re-airs at 9:30 a.m. Saturday, May 8, on KSFP Radio, 102.5 FM in San Francisco only, and is available anytime on Out in the Bay's website.

Out in the Bay: Steven Rowley's 'The Guncle' heals grief with humor
Sign up!