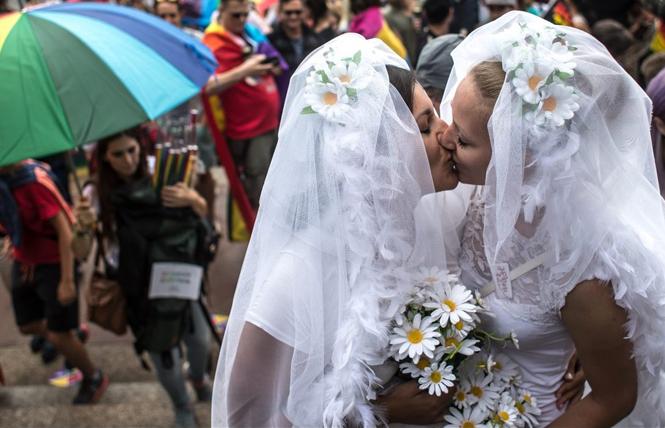 At the same time, the split government also voted on the opposition's bill to constitutionally ban same-sex marriage, which also passed. However, it would need a higher threshold to become law.

Czeslaw Walek, chairman of Prague Pride and head of We Are Fair Campaign, the country's organization fighting for marriage equality, was "thrilled" by the vote on the marriage bill, calling it a "huge success," in an email to the Bay Area Reporter.

"It sent a signal that the change is possible if we vote for representatives that support our cause," he wrote, referring to the Easter European country's forthcoming October general election.

Marriage equality opponents lacked six votes among 93 lawmakers present for the vote in the Czech Chamber of Deputies, reported Reuters.

Walek wrote that the opposition needs to meet a two-thirds majority to constitutionally ban same-sex marriage, which "will be almost impossible to reach."

"I am worried that we did not get a clear signal from our representatives that this option is not an option in the modern Czech society," wrote Walek.

Both bills have languished in the Czech Parliament since 2018.

The bills are supported by a near even split of opposing deputies on each side of the debate.

There are a couple more hurdles the bill must get over before it can become law and make the Czech Republic the first former Soviet-bloc country to legalize same-sex marriage. The Senate must pass the bill for it to go to the president's desk for his signature for it to become law.

It is unclear if it can pass through these hurdles before the country's October election.

"Realistically, we do not believe that we will manage to win marriage equality before elections," Walek wrote.

His goal is not to necessarily push for a vote before the election, but to energize the Czech Republic's marriage equality base to vote for candidates who support same-sex-marriage.

"This is a huge mobilization element for our base, to vote for pro-marriage candidates in upcoming elections, so next Parliament will vote for marriage equality swiftly," wrote Walek, who wants to make this election about allowing same-sex couples to wed.

One strategy he plans to take is surveying the candidates' position on same-sex marriage and publishing the results. He also expressed hope a forthcoming documentary about the fight for marriage equality in the country will also raise awareness of the issue.

Same-sex civil unions have been legal in the Czech Republic since 2006.

Outside the chamber on the streets of the Czech Republic, recent polls show overwhelming support for same-sex marriage and adoption rights in the East European country, but also show the opposition movement is growing.

A survey of more than 1,000 people over the age of 18 conducted by the Median agency in the Czech Republic published in 2020 showed 67% of people support same-sex marriage. When it comes to same-sex family rights, 78% supported second parent adoption and 62% supported same-sex adoption, reported Gay Star News.

The same survey also found opposition was quickly growing in the Czech Republic.

Comparing 2019 to 2018 survey results, people who were "definitely against" marriage equality was 15% compared to 10% a year earlier. Opposition to same-sex adoption also rose to 9% from 6% during the same period.

In January, the Czech Constitutional Court ruled against the Prague Regional Court's proposal to the United States to amend the wording in international private law to ban same-sex partners who registered abroad from adopting Czech children. The U.S. courts rejected the proposal.

The coalition accused the DHA of open use of LGBTQ stereotypes, hostility toward queer and gender-nonconforming people, derogatory language in official reports, using unconfirmed resources, such as Wikipedia, ignoring verified reports supporting claims, and questioning applicants' "authenticity" of their LGBTQ identity when making credibility claims for asylum status.

LGBTQ refugees were subjected to bribery, disdain, intimidation, mockery, and disbelief displayed by refugee status determination officers to the South African government's dismissal of their complaints as "fabricated or overblown," in the face of well documented evidence to the contrary, the researchers wrote.

The researchers also accused the South African government of subterfuge, blocking researchers from examining data to discover the discrimination, dismissing LGBTQ asylum seekers complaints characterizing them as "fabricated or overblown," and not living up to the country's domestic and international legal obligations.

The research team's findings confirmed the coalition's long held suspicions regarding LGBTQ refugees' situation based on a decade of journalists and researchers' reports about the abuses and discrimination LGBTQ refugees experienced within the DHA system, the authors wrote in an op-ed published by the Daily Maverick.

One of the most egregious letters the researchers found was the denial for gay Zambian Anold Mulaisho.

The researchers found it was clear the DHA officers held "gross misconceptions about sexuality and gender," that led the officers to question the applicant's "authenticity" being LGBTQ.

The coalition was made up of the Legal Resource Centre and People Against Suffering, Oppression, and Poverty. The Women's Legal Center, and the African Center for Migration and Society also worked on the report.

Out in the World: Key elections include record number of LGBTQ candidates
Sign up!