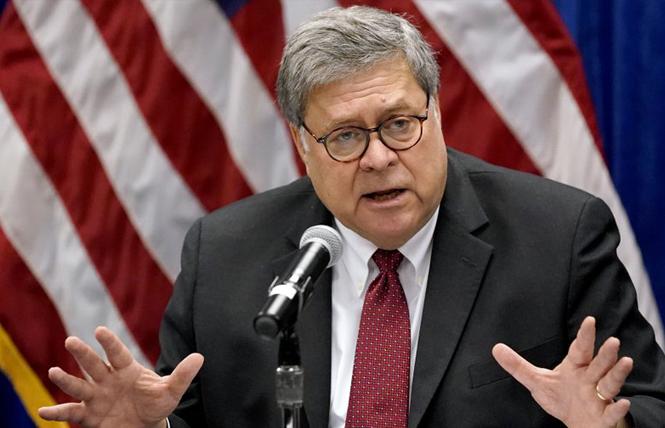 On his way out the door, former Attorney General William Barr delivered one last slap to minority groups, potentially including LGBTQs of color. The Justice Department quietly embarked on an 11th-hour bid to undo some civil rights protections in a change that, the New York Times reported, "would mark one of the most significant shifts in civil rights enforcement in generations."

At issue is how the department carries out Title VI of the Civil Rights Act, which prohibits recipients of federal funding from discriminating on the basis of race, color, or national origin. The regulation covers housing programs, employers, schools, hospitals, and other organizations. The Times reported that under the change, the Justice Department would continue to narrowly enforce the law's protections, but no longer in cases where a policy or practice had a "disparate impact" on minority or other groups, like old Jim Crow laws. That's a key difference, as patterns of discrimination are often used as evidence by plaintiffs in bias cases. It's just the latest effort by the Trump administration to scale back protections for minorities. Barr, of course, did not issue the draft language for public review or comment, as is usually the case. And, it can't be undone by an executive order once President-elect Joe Biden takes office. However, Merrick Garland, whom Biden nominated to be his AG on Wednesday, could choose to put implementation of the rule change on hold. That's exactly what he should do once the Senate confirms him. This is a serious development that undermines the disparate-impact approach to rooting out discrimination under Title VI and could undo many laws and policies that rely on it. It's disgusting that in the waning days of the administration, Trump officials have done everything they can to deny justice for those who experience discrimination.