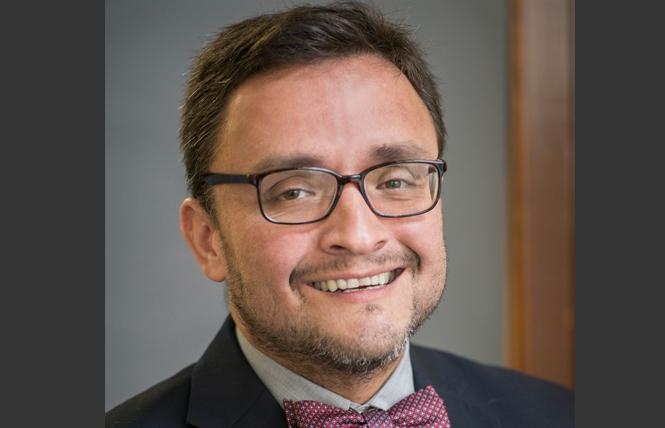 The mileage on David Campos' car's odometer is not increasing as quickly since he took on the job as District Attorney Chesa Boudin's chief of staff a little over two months ago — his previous role as a deputy county executive of Santa Clara County had him regularly driving between the South Bay and his San Francisco home.

"I'd commute by transit from time to time but it was easier to drive since Santa Clara County is spread out and I oversaw a number of agencies and office locations," Campos, a gay man, told the Bay Area Reporter recently in a wide-ranging phone interview.

Campos, 50, is already familiar to San Franciscans from his eight years as the District 9 supervisor and now as the chair of the San Francisco Democratic Party. On the Board of Supervisors, he represented the Mission district and Bernal Heights.

He hopes to add another job — as the B.A.R. recently reported, Campos announced December 21 that he is seeking the position of vice chair of the California Democratic Party.

It was the opportunity to work with Boudin, however, which led him to return to San Francisco government. He told the B.A.R. that he was inspired by Boudin's November 2019 victory and the top prosecutor's desire to be a progressive reformer.

"I loved my job in Santa Clara County. I was overseeing operations at a number of agencies in the last few months, helping with COVID response," Campos said. "When the opportunity of working with DA Boudin came up, I thought that it was the right move for me. When you think about where criminal justice reform is possible, if it can't happen here in San Francisco, it's hard to see it happening anywhere else.

"In San Francisco, with the leadership of this DA, it's possible, and I wanted to be a part of it," he added.

Campos said that his roots as a gay man, and as an undocumented immigrant from Guatemala, from where he came to the United States as a teenager, inform his perspective as the number two person in the DA's office.

"The administration of justice in San Francisco — that's a very serious responsibility," Campos said. "So you have to have humility in this work. Being formerly undocumented, an immigrant, the experience of being an outsider shapes how you see things, and that's an important perspective. I hope that the LGBTQ community knows we are dedicated to serving the diverse communities of San Francisco."

One way in which the DA's office plans to serve those communities, Campos said, is through the appointment of liaisons to the various supervisorial districts.

As the Bay Area Reporter previously reported, Matt Donahue, a bisexual man, has been appointed as the liaison to District 8, which covers the city's Castro neighborhood, Noe Valley, and the surrounding area.

"Matt Donahue is doing a great job in his district," Campos said. "Having been a district supervisor, I know the importance of close relationships."

Campos said that more liaisons are expected to be announced this year.

"We will have an announcement on this ... on how we are building on that progress," Campos said. "Government is most effective when connecting to communities."

Boudin, a straight ally, said he doesn't remember who approached who first but that he's been seeking Campos' advice since he first decided to run for district attorney. Prior to becoming a supervisor, Campos worked for the city attorney's office and represented the San Francisco Unified School District in its school desegregation efforts. He also served on the Police Commission.

"I've known David for a while and I don't remember how it all started but he was one of the first people I talked to when I decided to run for district attorney," Boudin told the B.A.R. "I have admired his leadership on the Board of Supervisors and the Police Commission for years. We talked politics and policy for a while."

Boudin said he knew the commute down to Santa Clara County had been "taking a toll" on Campos and pointed out that the chief of staff had to take a pay cut when he got the new position. (Campos made about $267,000 in Santa Clara, according to Transparent California. DA spokesman Alex Bastian stated to the B.A.R. that Campos "took a $50K pay cut" and cited a salary figure of $290,000 for Campos' previous job in Santa Clara County.)

"He's been a huge asset and a real coup for the office," Boudin said. "David has deep relationships with all the stakeholders in San Francisco. He knows what works and what doesn't work at City Hall, in city departments."

Bastian told the B.A.R. that he is grateful for the expertise Campos brings to the job.

"We're all very fortunate to have David's experience," Bastian said. "He's the greatest guy ever."

DA starting to make an impact
Campos touted the accomplishments of Boudin's tenure thus far, such as the elimination of cash bail, and defended the office's track record on decisions about whether to charge law enforcement personnel for alleged crimes against civilians — a hot-button issue that was a major feature in the police reform protests last year in the wake of the killing of George Floyd by Minneapolis officers.

On December 10, Boudin's office declined to file charges in two officer-involved shootings: the killing of Cesar Vargas October 11 in the mid-Market neighborhood and the attempted shooting of Thomas O'Bannon April 21 in the Tenderloin.

"My office is committed to holding police accountable when they commit a crime as well as to notifying officers who are investigated — and the community at large — as soon as possible when an investigation is complete," Boudin stated in a contemporaneous news release. "My office carefully reviews the specific facts in each case involving officer use-of-force so we can determine when charges are warranted as well as when officers acting under stressful situations behaved lawfully. In these two incidents the evidence showed that the officers' use of force was lawful self-defense."

However, the office did announce charges in three other cases. On November 23, former police Officer Chris Samayoa was charged in the 2017 killing of Keita O'Neil, which is the first prosecution case against a law enforcement officer in the city's history, Boudin noted at the time. (Samayoa pleaded not guilty in his first court appearance December 28.)

The DA's office also announced an indictment against Officer Christopher Flores in the 2019 Jamaica Hampton case; in that case the indictments were returned by a grand jury. The grand jury also indicted Hampton on various charges stemming from the alleged incident.

On December 14, Boudin announced felony charges against a police officer, Terrance Stangel, who allegedly beat Dacari Spiers, a Black man, in the Fisherman's Wharf neighborhood in 2019.

In that case, the complaint states that Stangel broke Spiers' leg and wrist while the former was responding to a 911 call of a man assaulting a woman. Nobody witnessed Spiers committing an illegal act, and he was not arrested, though his injuries required surgery.

"Officers responding to a call have a duty to promote public safety — not to turn to violence as a show of authority," Boudin stated in a news release. "This case is an example of an officer unnecessarily escalating a situation and then violently beating a Black man whom he had no legal basis to even arrest. Officers who not only fail to promote safety but actively harm others must —and in my administration will — be held accountable."

"The filing of those cases are important, but at the same time we tried to be fair in how we look at cases," Campos said. "As we announced charges being filed we announced in a couple of cases that charges wouldn't be filed to provide closure to the families involved and people impacted by these incidents."

According to Campos, the protests for criminal justice reform last summer did not so much change minds in the DA's office as much as underscore their convictions.

"I think that what the protests and activism have done has been to shed light on the importance of reform so it hasn't in that sense changed where the DA has been, but it has brought attention to those issues and helped people to understand that it's real," Campos said. "I used to be on the Police Commission, on the Board of Supervisors, and I can tell you that talking about police reform was very difficult. There were not a lot of people on board with that message. If there's any silver lining to the death of Mr. Floyd, it's that it's given us an opportunity for real reform that, prior to this, I wasn't sure was possible."